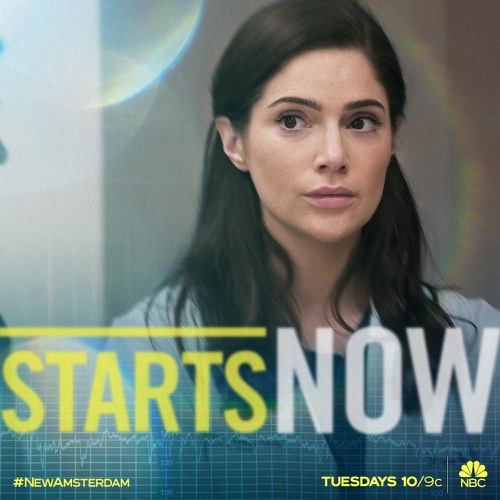 Tonight on NBC New Amsterdam premiere with an all-new Tuesday, January 8, 2019, season 1 episode 10 called, “Six or Seven Minutes,” and we have your New Amsterdam recap below. On tonight’s New Amsterdam episode as per the NBC synopsis, “As Max fights for his life, New Amsterdam is in full swing with a pertinent heart surgery that is not covered by insurance and a potential nurses walk out. As the team feels Max’s absence and the doctors find out that they may have to treat one of their own, Sharpe must finally come clean about Max’s condition.”

Everyone is looking for Max, Dora keeps telling everyone that he is unavailable for a few hours. Akash asks Helen to dinner, then he tells her to bring her wallet, as they are each paying for themselves.

Georgia calls Helen, Max passed out and she is waiting for 911. Max’s throat is blocked and Georgia needs to make a small hole, she finds a pocket knife and Georgia guides her. Georgia is freaking out, she might give Max an infection, Georgia tries her best to calm her so she can get Max breathing again. It worked, Max is breathing.

We look back to a time when Max was treating a man and met Georgia. They are now in an air ambulance and on the way to the hospital.

Floyd is treating a patient and give her good news that she is going to get the surgery she needs.

Iggy and some of the other staff are wearing pink shirts that read, “reproductive rights for all.”

Helen spills the beans to Dora and the team about Max’s health, they are shocked. Max arrives and Lauren throws a lot of people out of the room so she can attend to Max.

Outside the room, Floyd asks Helen when Max is starting chemo, she explains that he is not, and tells them about the treatment program he signed up for.

Lauren comes out of the room and Helen is surprised, she asks her what is wrong. Lauren says that she has been pulling doubles and she wasn’t the best one to work on Max.

Dean Fulton walks up and tells everyone that until Max comes out they need a leader and he is going to be it for the time being.

Dean Fulton tells Helen that she and Max should have had a succession plan. Akash calls Helen, she tells him about Max asks him to move up Max’s date.

We look back again, to Max and Georgia, when he proposed to her.

Back at the hospital, Iggy tells Kapoor, it makes sense. The decisions that Max made were made because he knew he was dying. Dean Fulton intervenes with Floyd’s patient and cancels the surgery because she has no insurance and Max did not sign the order.

Dean Fulton tells Iggy if the nurses walk, then he will just have to replace them, Iggy needs to convince the nurses to stand down with Max not around.

Laura wants an update on Max, they Laura wants to help and Helen reminds her that Max is not her patient. Helen takes Laura to the side and asks her why she passed Max off. Laura admits that she was overextending herself and taking more Adderall than she should have, that is why she passed him off.

Kapoor and Iggy are outside talking, Kapoor tries to make the conversation light and Iggy can’t forget what is going on in the hospital, he has to speak to the nurses and Max is down.

The janitor walks up to Georgia and tells her that Max is the first person in the hospital with his position, that cared about them.

Another look back to Georgia and Max, she is at home and received a FedEx package of documents, Max got the job at New Amsterdam and never told her that he applied there. Max had made a promise to put his career second, this is against his promise.

Georgia is with Max when Kapoor comes in and says a prayer for him. Georgia goes to kiss Max and the spot gets red and swollen. In fact, all over his body starts to become red and swollen from cancer, but now they can treat it.

Iggy leads a march with the nurses, Dean Fulton looks on very displeased.

Floyd went ahead with the surgery with his patient, against Dean Fulton’s order.

Georgia is with Max when he wakes up and tells her it is ok. The team finds out that Max is awake and they all go to see him. Max announces that he wants to start chemo, he doesn’t want to risk losing Georgia again, that is his priority and he has no choice but to resign. The team won’t have it, they will help out. Georgia tells everyone that Max needs to take care of himself, which is the reason why he is not quitting, this job is who he is.