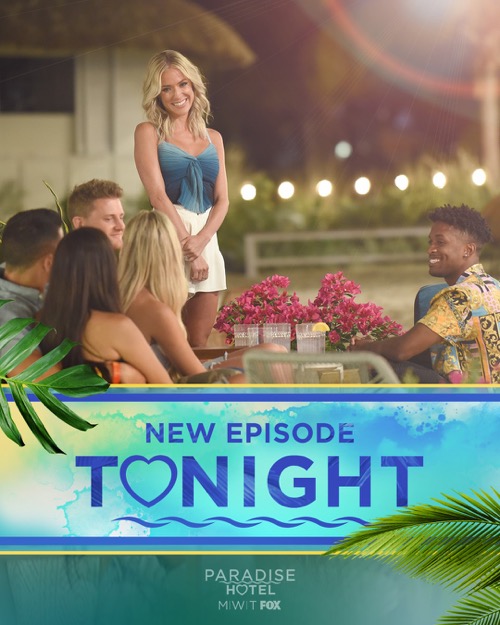 Paradise Hotel airs on FOX this evening with an all-new Wednesday, May 15 season 1 episode 3 and we have your weekly Paradise Hotel recap below. On tonight’s show as per the FOX synopsis, “Kristin Cavallari hosts the innovative unscripted dating competition series, in which sexy singles try to remain in paradise for as long as possible by pairing up. As relationships heat up, one unlucky single will get left in the cold and have to leave the hotel to make room for a brand-new guest”

Be sure to come back tonight at 9 PM for our live Paradise Hotel recap of tonight’s episode. While you wait for the recap, hit the comments and let us know how excited you are for this season of Paradise Hotel?

Tonight’s episode of  Paradise Hotel begins now – Refresh Page often to get the most current updates!

Can the contestants find genuine love with such a time limit? It’s the time limit that’s the problem because these contestants have to pair up right away or risk being eliminated and sometimes they relied on manipulation rather than love. Tatum made this mistake when she came up with her bright idea. She thought that if she flirted with Jair and convinced him that she has feelings for him that he would save her from elimination, but then she would save Bobby Ray. Bobby Ray and Tatum were the ones with the real connection. They’ve been bonding as they come up with these plans and so they thought together could eliminate Jair. Their plan failed and now it was Jair with all the power.

Jair thought that Tatum cared for him. He was planning on inviting her to pair off and that would leave Bobby Ray screwed. BR seeing that he was now in danger of being eliminated had turned to his friends to figure out where it all went wrong. He told them about his secret plan with Tatum and how it was Tatum’s idea to flirt with Jair because she wanted to eliminate all the other boys until it was just her and him. BR panicked for a while because he had no clue what to do next, but then he got to thinking about things and he started a new plot. Bobby talked to Tatum and their friends about Brittany. Brittany was upset with Hans for calling her out in front of everyone because she said if he had a problem with her then he should have taken her aside.

Which is true. Hans knew that this was all a game and so him upsetting Brittany was a really dumb move. It could mean that she ends up picking someone else. The others had talked about Brittany’s possible choices and they knew she wasn’t going to be quick to forgive Hans, but they didn’t want her to pair off with Kyle either. Kyle was close to Jair and both Tatum and BR wanted them gone. They let it Tyler in on the plan and he said that he would help manipulate the game. They didn’t Brittany in on the plan and she was supposed to be Tatum’s girl. So there goes loyalty for you. Brittany was allowed the chance to get closer to Hans and they ended up enjoying the festivities that the hotel had provided.

Paradise Hotel offers up a variety of amenities and events. Their latest event was Casino Night! It gave the chance for people to forget about the game and just have some fun. They enjoyed playing blackjack and they also ended up playing a new guessing game about their fellow contestants. Everyone got a laugh out of that last one. It almost made them forget about the rest, but by the next morning, it was back to the game. Carlos, it seems had overheard Tatum’s plan and so he went to Jair. He told them all about what he heard and he said that they needed to break up the power up couples. And one of the ways to do that was to eliminate Tatum because, without her, there was no Bobby Ray or the couple’s friendship with Rosanna and Tyler.

Rosanna and Tyler had a massage date and without them around – a lot actually got done. Carlos plotted with Jair and everyone else got to enjoy themselves. They said there was no tension and that Rosanna wasn’t pressuring anyone to pair off. She sort of got on people’s nerves and so there was the talk of knocking her out.  Nothing serious, but it was said and that was what Rosanna feared the most. She admitted to Tatum that she had one of the most real connections with Tyler and she didn’t want to lose that. They were even talking about meeting each other’s parents and so Rosanna’s confession left Tatum feeling bad. She knew she treated Jair horribly and she tried to make things right by going to see him.

Tatum told Jair that she has a connection with Bobby and that she wouldn’t know what to do if he chose her. She also said that he could form a real connection with someone else and maybe even Brittany, but Jair was just so upset that he didn’t really listen. Jair felt played. He was a nice guy and that’s something that Tatum said as well. He was a nice guy and he didn’t deserve to be manipulated. Jair wanted revenge for that and so he was going to after the super couples. Jair was going to take Carlos’s suggestion and meanwhile, Carlos was making plans with Tyler. They were going to get rid of Kyle and Hans. And Carlos went on to say he sure up his end by sleeping with a girl just to ensure he stayed another week.

Like, what?!?!  Sex shouldn’t be used to win a game and Mariaelena deserved better. She thought that Carlos was in her and he was just using her. They slept together because he didn’t want her to pick Kyle. Kyle and Mariaelena have been talking lately and they really get on. She might also have been tempted to go with Kyle and then that all changed because she slept with Carlos. So here’s hoping she never finds out the truth.

Kyle later received the chance to pick any girl to pair up with for the night and he talked to Jair about it, but he didn’t make choice clear tonight and so don’t forget to tune in tomorrow to find out which couple he might have broken up.