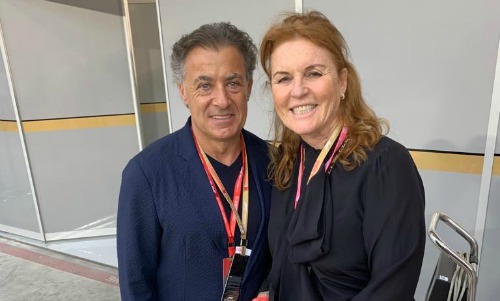 Prince Andrew and Sarah Ferguson might be the friendliest ex-couple in the royal family, but they want everyone to know that their relationship is nothing more and certainly nothing less than what it is. In fact, the exes were forced to deny reports that indicated they were official getting back together again. The couple divorced back in 1986 after just four years of marriage.

According to People Magazine, Sarah Ferguson accompanied her ex-husband Prince Andrew on a trip to Bahrain recently. Their daughter Princess Beatrice and her boyfriend Edoardo Mapelli Mozzi, were also there. Sarah shared a behind-the-scenes photo of on her Instagram account and tagged her ex-husband, prompting speculation that she and Andrew might have rekindled their romance. A rep for the Duchess told the publication that the reports are simply not true.

Of course, this isn’t the first time that Prince Andrew and Sarah Ferguson’s post-divorce relationship has made headlines. The exes are in fact very friendly with one another and often vacation together with both of their daughters, Princess Beatrice and Princess Eugenie as a family.

If they are not skiing near their luxurious hideaway in Switzerland, they are dining together at one of London’s many hotspots. Sarah still resides at the family’s home at the Royal Lodge at Windsor and has no intention of moving out anytime soon.

Back in 2016, Sarah Ferguson admitted that she and Prince Andrew are very happy living their live together, but separately. With that said though, Sarah has been forced to keep her distance from the royal family. During Prince Harry and Meghan Markle’s wedding in May of 2018, the Duke of York arrived first with their two daughters while Sarah attended the wedding on her own.

The same happened during Princess Eugenie’s wedding to Jack Brooksbank back in October of last year. Even though Princess Beatrice was supposed to be her sister’s maid of honor, she accompanied her mother Sarah Ferguson to the ceremony just so it didn’t look like she was there completely on her own.

In the meantime, don’t forget to check back with CDL for all the latest news and updates on Prince Andrew, Sarah Ferguson and the rest of the royal family right here.

So proud of Andrew, Eugenie and Jack today at the opening of the new Stanmore Building @RNOHnhs Eugenie was operated on there at the age of 12 for scoliosis and my family owes the hospital so much @TheDukeOfYork @thernohcharity pic.twitter.com/UcnB2eQJmm