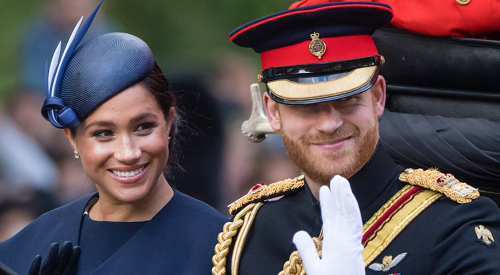 Prince Harry and Meghan Markle live just a stones throw away from St. George’s Chapel where the Order of the Garter service was held on Monday, June 17, 2019. However, the Duke and Duchess of Sussex did not attend the centuries old ceremony.

The Order recognizes an individual’s extraordinary efforts of public service. Despite Harry’s devotion to charitable work, including the Invictis Games and the Halo Trust, the Duke of Sussex is not a Knight of the Garter.

It was not a snub from the Royal Family or any alleged disagreements Prince Harry and Meghan Markle may have with Prince William and Kate Middleton that prevented the couple from being part of the June 17 service. The Duke of Sussex is not yet a Knight of the Garter, his attendance is not required.

Harry and Meghan are as devoted to their charitable work as the Duke of Cambridge and the Duchess of Cambridge. However, it is highly unlikely that the Duke of Sussex will be invited to become a Knight of the Garter until Prince Charles becomes King.

It could several years before Prince Harry is asked to be a Knight of the Garter. If the Queen is upon the throne another decade, Prince Charles will be 80 when he becomes king. Prince William could be closing in on 50 before moving into the first in line to the throne slot.

Of course, it is possible that the Queen may choose to make Harry a Knight of the Garter sooner. Royal experts have surmised that Prince William was invested a young age because the Duke of Cambridge is second in line to the throne. Kate Middleton was present for William’s investiture in 2008, accompanied by Harry.

The Duchess of Sussex is still on maternity leave from Royal duties. Meghan gave birth to Archie Harrison on May 6. Royal watchers do not expect Meghan’s return to Royal duties for several weeks.

The Duke of Sussex has kept busy with several public appearances. The most recent was the speech Harry delivered at a combined event for the Chatham House Africa Programme and Halo Trust that unveiled the Angolan Government’s new action to rid Angola of dangerous land mines.

The Duke and Duchess of Sussex absence from this year’s Royal Order of the Garter service was not caused by any supposed rift with the Duke of Cambridge and the Duchess of Cambridge. Royal watchers probably will not stop looking for signs of dissention between Meghan Markle and Kate Middleton.

The Duke and Duchess of Cambridge depart the #GarterDay service with The King and Queen of Spain — today King Felipe VI was installed as a Supernumerary, or ‘Stranger’, Knight of the Garter. pic.twitter.com/j135mD08FA