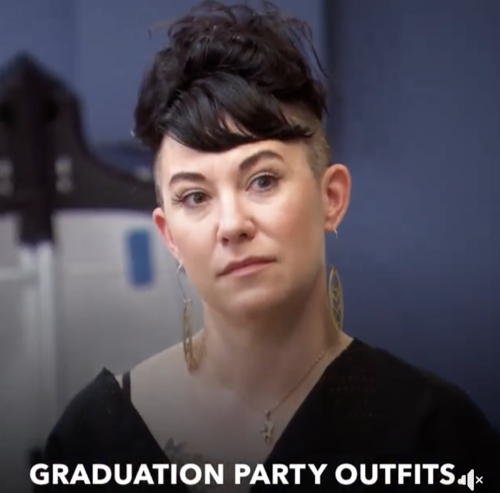 The contestants were joined by two new faces when no one was eliminated last week. But while facing off against additional members in their Winner’s Club could have been daunting, many were just ready to get on with the latest challenge. The challenge tonight was brought to them by Georgina Chapman. Chapman was an amazing fashion designer and also a great humanitarian. She was assisting with a charity called Magic Bus and the charity helps children in underdeveloped countries to receive an education. These kids often don’t receive certain luxuries and so that’s where the challenge comes in. The contestants had to create a perfect Spring and/or Summer outfit for a graduation party and they had to use colors based on real school colors.

Dmitry as the winner of the last challenge got to choose who got what and, well, he sort of screwed over everyone because school colors are usually two colors that should never be combined yet somehow the contestants had to make dresses out of them. There were some contestants that decided to downplay the two colors and others that decided to go full prom dress mode. They were later guided by their mentor Anne Fulenwider and she helped steer some of the contestants away from the tacky and instead embrace the graceful edges that the judges were looking for. And some of the contestants got what she was trying to say and others were completely tone deaf to her criticism.

Anne told Irina that her dress was too short and Irina kept it the same length. She created a really short dress that her fellow contestants were it calling a cross between a fairytale dress and what prostitutes would wear. It was just bad! Irina was the only one that couldn’t see it and the others hadn’t tried to help her out. They left her to it as they focused on their own dresses and put the final touches on. There was some last-minute sewing and then they had to get the models ready. They had to choose the right makeup and hair to complete their outfits as well as the models. And at the end, they took time to look over at someone else’s station to judge each other because of course, they wanted to choose the dress they believed was going to be in the bottom.

Only they didn’t need to use words like “slutty Barbie” or “basic bitch”. This was just them being catty right before the runway and surprisingly their attitudes couldn’t go towards their dresses. Especially as some of them were lackluster. The dresses each had their moment to shine on the runway and not all of them lived up for the stage. So judging had been brutal! The judges had found it be a fabulous runway show when it was together but taken apart and there were hits and misses. The first thing the judges wanted to talk about was Seth’s dress. It was “White and Wine Red” that some of the judges loved while others said it was too much. And everyone was in an agreement about Sunny failing the challenge.

Sunny had “Blue and Yellow” though he only used the color yellow. He put one single blue pin on it and had failed the challenge when he hadn’t incorporated any blue fabric. The judges also loved Anthony’s look. Anthony had “Orange and Blue” and somehow he made it work. It wasn’t old feeling like Christina’s dress or Seth’s dress which the judges both said should be worn by older women rather than fresh-faced college kids. The judges were also in agreement when they said they hated Irina’s dress. They called it tacky and even commentated on how they a few of them saw the model’s crotch. They said the detailing was great for the short amount of time that Irina had and so it was the length, the plunging neckline, and fabric that sunk her dress.

The judges let the contestants go as they talked about who came out ahead and no one could truly agree for a while. It was Anthony’s dress that had been in the lead before deliberation but some questioned if it wasn’t too sporty or not sporty enough and so he only won because he had perfectly incorporated the color challenge. That’s what the judges had been looking for and it was Anthony had provided when he made his colors work. But the bottom two came down to Irina and Sunny. Sunny’s dress had looked beautiful and if he had remembered the color challenge that he wouldn’t have landed in the bottom two or be the one eliminated on tonight’s episode.

Sunny will be missed and it just a shame that he was the first one eliminated.