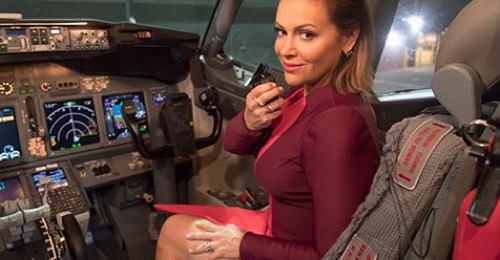 The contest was learning the art of repurposing. They had been brought to the airport where they learned that Southwest Airlines went out of their way to donate to charities that could recycle anything and turn into art. Therefore, the challenge for the contestants was to see if they could do the same. They had to design not only a luxury traveling outfit but their outfit had to come with the much-needed accessories for air travel and it all had to be made from what they could find at the airport. The contestants were then given a few minutes to scrounge for what they needed in the recycled items section before they could get to work on the challenge and so it was a good thing that they had two days to complete their look.

The Unconventional Materials Challenge was a tough one. No one knew what they wanted to create when they went rummaging through plastic cups, seat belts, and trash bags. They were just running and grabbing. Except for one person. Juli decided she wanted to be ladylike and so she hadn’t run towards anything. She chose to instead pick up whatever was left after everyone else was finished and that’s how she pretty much landed the sick bags. The bags weren’t unique. There was just white and boring while everyone else was embracing color. So she soon decided to change it up as she was planning her design and as it happens someone else managed to incorporate sick bags into their own design as well.

Sean meanwhile had a vision of using aviator glasses and despite having grandiose ideas it didn’t seem like he knew how to properly put the pieces together. Their mentor Anne had later showed up and she didn’t think Sean was going to pull his vision off. She also didn’t think that Juli took enough risks with her outfit which she said reminded her of a prom dress and she had been critical Jasper as well. He was creating a dress basically out of paper and he had been fine with just cutting up to create a fringe look when Anne asked him if that was “all” he was going to be doing. She said that the judges needed to see more than mere shredded paper to create a look and so at the last minute Jasper was running around trying to make his look seem a little more put together.

Only Jasper turned it out when he needed to. Sure, he was overly fussy with the model and was telling her what kind of walk he wanted though he also created a beautiful look that was well accessorized. The others had called him sneaky because he starts out frazzled and then pulls his look together in the final hour. So maybe self-doubt and running around like his head was cut off as part of his creative process. His look was one of the better one’s tonight and so it was nothing like either Juli’s or Seth’s. Seth created a look out of seatbelts and it wasn’t even really an outfit. It was just seatbelts all hanging off the model’s frame and it wasn’t even put together to resemble anything. He wanted it to look like a turbine and it looked a mess. fringe look.

Sean’s look with the glasses was also out there and in all honesty, it would have looked better if he hadn’t included lenses. But Irina made a comeback with her look. She used red plastic cups to create a unique outfit and hadn’t shied away from creating a bag to perfectly go with it. Some of the others relied on the JCPenny Wall for help and so what Irina set her apart from the others. The judges had loved her this time around and her look along with Michelle’s dress really stood out. They had also like Jasper’s look and it was likened to something that Michelle Obama would wear. The bottom three, on the other hand, were obvious. The only judge that liked Sean’s look was Alyssa and no one had liked how safe Juli went or how out there Seth went.

The judges ultimately named Irina as the winner of this challenge. She will receive a free flight, five thousand dollars, her look will be made available for JCP. But once the winner had been announced, it had been time to name the bottom two. The bottom two for this week was Juli and Seth. Seth’s look hadn’t come together in time for the runway and so the judges eliminated him. Seth had one last chance to speak to the cameras and he had been blunt. He said his look hadn’t been the worst this week and that he shouldn’t have been eliminated.

Seth didn’t say this to the judges and so he had been adult about his elimination.