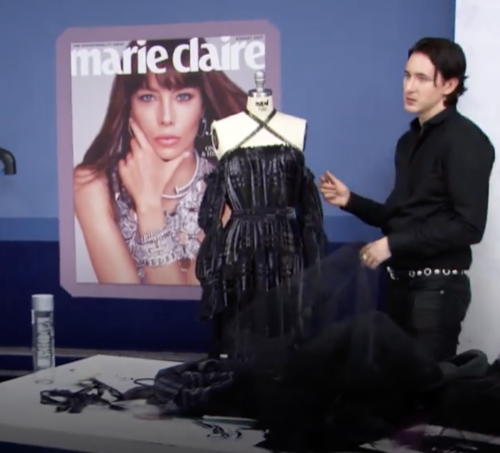 The designers were sent to the Zoo. Their challenge was to create a look for a Wild Night Out and of course with Project Runway All Stars that didn’t necessarily mean a little black dress. The designers had to create a look based off of an animal and what that means is that they had to combine all the features of the animal they chose to go into the look itself. Some of them went a little adventurous at the Zoo and others played it safe. Like Dmitry. He went and found a rhea. A rhea was a giant bird with mute colors like black, gray, and white. It wasn’t much of a color challenge only he did at least use his colors. He wasn’t like Sean who chose a giraffe and then tried to play around with muted colors that would never remind anyone of a giraffe.

Another designer that was concerning was Juli. Juli chose a cheeky monkey because it had flirted with her at the Zoo and as it turns out that wasn’t a great reason to choose an animal. Especially as the animal comes in black and white. Juli tried to recreate the fluffy cheeks on the monkey by creating a fluffy look with black and white fabric and it didn’t quite fly with Anne. Anne wanted Juli’s look to come more together and she was a bit on the warpath because she came for other designers as well. She asked Irina if she was sure about her look, she guided Anthony, and she broke Django. Django chose the lion and he could have done amazing things with the king of the jungle. And so Anne didn’t get why he was adding green or trying to throw so many concepts at one look.

Django gets into his head that he’s going to be out there and different, but last time he was in the bottom three and so maybe he should have listened to Anne when she said to stop it with the color green. He used green for the corset look and that in combination with white and purple had made his look appear as if the model threw on everything in a rush to leave the house. It wasn’t actually a look! Django should have remembered that and all he did was ignore the past. He continued to use white and green to create an odd jumpsuit and he even threw a hissy fit about how Anne was crapping on his look just because. He said that Anne would have been giddy over it if Chanel came up with his idea and so he went about ignoring the woman that was supposed to mentor him.

Then there was an issue between Michelle and Dmitry. The two counted each other as friends and so Dmitry had been surprised when someone one else pointed out to him that Michelle had copied his look from a previous season for their current challenge. She had also upgraded the look with her use of color and beading, but a dress made from cut-outs had been the look that helped Dmitry win and so he didn’t want anyone “borrowing” it. He tried to laugh it off and then he began griping about how it was so good he was able to inspire Michelle. Michelle soon heard of what he said and so she tried to confront him. She asked him if they were friends because friends would say something to the other’s face and not behind their back.

Michelle didn’t believe that she copied Dmitry’s look, but everybody else saw it and some even dared to say that Michelle followed the rules because elevated the look. Either way, it didn’t matter what the designers thought of each other because it was the judges’ opinions that matter. The judges came to love Anthony’s look, Dmitry’s look, and Michelle’s look. The judges thought that Michelle’s dress looked like something Dmitry would do and so even they saw it. They loved how three of the designers managed to really emphasize the animals they chose and the dress that appeared in the lead at first was Michelle’s just because the additional texture she added to hers that somehow made porcupine look great.

The look the judges appeared to hate the most was Django’s. No one knows where he came up with the green and they didn’t like it. The only thing they liked from Django was the bracelet he created. The bracelet said lion meanwhile the model was a hot mess. She was wearing an outfit that wasn’t quite a jumpsuit nor it was quite a dress. Django had raised the front and lowered the back. In other words, he created the mullet of dresses and couldn’t properly pull off. Django was joined in the bottom by Juli because her dress had been pretty basic and Sean who used a material that the judges didn’t like because they thought it was too shiny. And that Sean threw in a bow for no reason on his jumpsuit.

The winner of tonight’s challenge was Michelle.

The person eliminated over tonight’s challenge was Juli.