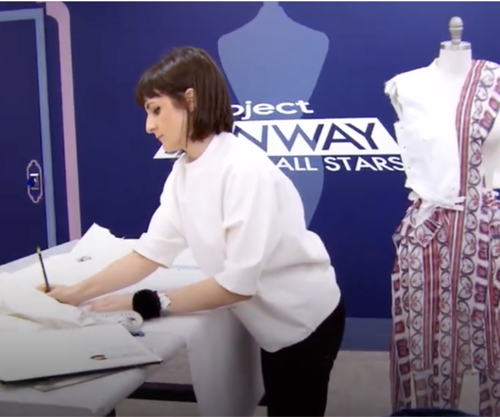 The designers were put on notice. They were given their toughest challenge yet when they learned that they had to create gender neutral street wear. Most of them have stuck to High Fashion and so they wouldn’t know what Street Wear looked like even if it bit them, but they had to take a chance. They had to create something that would work for their All-Inclusive Challenge. They pretty much all considered a jacket combo of some kind and so fabric shopping wasn’t all that imaginative. It wasn’t until they got back to the studio and were stuck trying to figure out what to do with all that fabric they bought that they received their first clue as to who would be modeling their attire.

They were all given placards with measurements on them. The measurements would at least tell them the odds of what gender they were going to be dressing and so that’s how Anthony Ryan realized he made a mistake. The fabric he got was for a potential woman and his measurements were for someone as tall as 6’4. If that was a woman then it was going to be an Amazon. Anthony Ryan didn’t have enough fabric for someone so tall and he began panicking. He tried to rely on Dmitry who was also extremely tall and that made him restructure his unique take on the unabomber jacket.

Others liked Christina tried to play it safe. She wanted to create a look that would hide the body because she thought that was gender neutral, but Anne came by and she checked everyone’s look. She could see where some of them was going and so the one look she took issue with was Christina’s. It was just too frumpy. It was an oversized kimono that wasn’t anything special. Christina was told to shape up her look and she tried to as the designers were finally introduced to their models. The models were a mix of genders and Anthony Ryan’s model was actually a transgendered woman.

As long as everyone got their pronouns right, they had someone to work with as they tried to build a look. They each decided to add something here and subtract something there. Only the first one to finish was Irina. Irina had loved her fabric so much that she decided to create a look for herself with her extra piece. She wanted to create a dress and for some reason she also used Christina’s sewing machine to do it. There was one point when Christina needed her machine and Irina didn’t get the hint. She stayed seated and so Christina used Michelle’s machine and that set back Michelle who needed her own machine.

Irina was truly considerate with what she did. She set back two other women’s timeframes and they both had to rush through their process to get ready for the runway. The runway show had been mostly oversized coats because again they had played it safe, but Biddell who likes to dress gender neutral himself had given an unique take. He created a pants, vest, and shirt combo that was really good. It was so good that he was deemed safe from critique. The judges could have only picked one person and that chose Biddell even if he hadn’t liked it. He had wanted to win the competition and was getting sick of being in the middle.

There were other looks that the judges preferred and so Biddell lost out this week, but sometimes being safe from critique was preferable. The rest of the designers all got to hear the best and worst of what the judges had to say. Michelle’s look had been a hit because she created something fashion-forward that also looked comfortable. It was one of the rare times the judges had all agreed because they had been split for the most part. The judges had been split on Sean’s look because half loved it and the other half called it cliché. They had also been split on Irina’s look because half got it and the other half said that they didn’t see the Irina in the look. And they couldn’t agree on Anthony Ryan’s look because at least one person had recognized his silhouette from another challenge.

The only other time the judges had been in agreement had been the time when they hated Dmitry’s look because of the buttons and when they loved Christina’s look. This challenge had left the judges confused about what was up to par and what counted as gender neutral. It had even stumped their guest judge for tonight. Asia Kate Dillion was a gender neutral actor whose pronouns were they, their, and them and yet their opinion was all over the place when it came to this challenge.

The judges all loved and hated something from each designer.

But they soon came to name Christina as the winner because they loved her Japanese pajamas and then they sent Sean home because well this really hasn’t been his season.

Sean failed to rise to the challenge and so this was his last night.