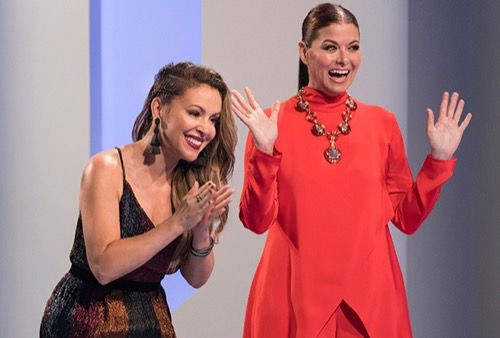 It’s getting very competitive as we rush towards the finale. Everyone wants to win and to do that they had to impress the one and only Nina Garcia. She’s just come back from vacation in Thailand and she enjoyed the views, but she especially loved the culture because there was nothing like seeing a runway fashion show in Thailand. The people there have done incredible things by incorporating their own Asian culture with modernity and so Nina Grace wondered if the designers this season could do the same. The designers were asked to create a ballgown using one of a kind silk that their guest judge loved most about her trip. And these ballgowns couldn’t be the basic dress that some of them have fall into since the start of the season.

The ballgown also had to be formal. Many took formal to mean different things and so some considered it to be like something Megan Markle would wear with a tiara one day, but others just assumed it had to be floor-length and there was a massive difference between those two things. Michelle ended up shopping for a floor-length gown because she grabbed a bunch of colors that she wanted to throw on the dress and make it ugly beautiful. She thought that something that slightly ugly was unique and at the other end was Irina. Irina was used to creating ballgowns and so everyone expected her to do well. Only Irina put a lot of pressure on herself and she wanted to create a multi-layer sort of gown.

Irina also hated how the other designers thought she had an advantage. She said that they all won their seasons and have had to step out of the norm for a challenge, but to dismiss her efforts because she’s used to creating bridal gowns wasn’t fair. She was working on creating a formal ballgown that could be couture and she was trying not to fall into the bridal gown genre. Anne later came around and she had warned Irina about that. She also warned Dmitry about his look because it looked too casual and so he knew he had to elevate his look. Except he wasn’t the only one that suddenly needed to fix where he went wrong. Michelle’s search for the ugly beautiful gave her a dress that was just ugly.

Anne said Michelle’s dress looked like a 70s kitchen. It was so many colors and was so bright that it wasn’t even something Michelle could love. Her dress wasn’t coming together and she didn’t have an excuse like Anthony Ryan did. Anthony Ryan had genuinely become depressed during the last couple of days. He had felt sad about the workroom being so empty and had started to cry when he Anne. Thankfully, Anne could see the problem and so she was there to comfort him as well as tell him that he was on the right path. He had created a yellow and white caftan that he was beginning to put feathers on. And he didn’t actually get out of hand with those feathers until after Anne had left.

Meaning no one was there to warn him that they’ve seen that look before. Anthony Ryan struggled with the creative process, Michelle’s dress looked more like a gimmick than something people would buy, and Dmitry’s dress ended up looking really dated as it belonged to the bad part of the 80s. The only ones that have followed the challenge have been Biddell and Irina. They created unique ballgowns that met the challenge and deserved to be showcased for Nina Garcia as well as living legend Iris Apfel. Apfel especially because she was a living legend! The judges paid close attention to each and every dress that came out on the runway. And the first person to start hating on the looks had been the designers themselves.

Michelle had hated her dress on the runway because she didn’t like in movement. So she had been the only honest one. Everyone else had thought their dresses were great and were bound to win this challenge, but naturally, most of them were wrong. Anthony’s dress was tore to pieces by the judges because they didn’t like what he did with the feathers and they did the same to Michelle’s dress. Her dress was called a party dress because they didn’t see anything formal about it. They were mixed on Dmitry’s dress because on one hand, it had great detailing and another it looked very much like a has-been. And surprisingly they didn’t like Biddell’s dress so much because they said it was fitted enough.

The closest to being happy the judges were was when they saw Irina’s dress. If she didn’t have the sheer bottom then they would have loved it more, but she also received her fair share of critiques and so the designers who would win. They went to the back afraid they all could go home and when they came back out again it had been surprised to all when Dmitry was deemed safe. Meanwhile, the winner of the challenge turned out to be Irina. She won a trip to Thailand for her ballgown and Biddell came in second.

But Anthony Ryan was eliminated because of this challenge and everyone was so broken up by it that didn’t feel like a good episode at all.