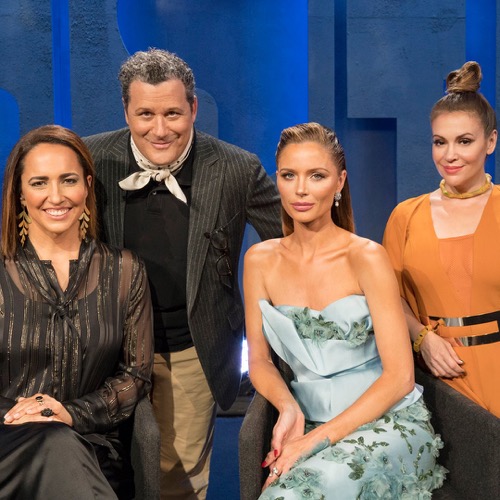 The designers were given a rare challenge. They were asked to design custom looks for a whole family. The family had to be ready for the runway as well as a traditional family portrait, but as no one wanted to see a random family looked like themselves, their looks had to remain elevated to a Project Runway All-Stars standard. The designers later got to meet their families. They got to talk to them and really get a grasp on their characters. There the preteens that wanted to be cool and mothers that were worried that everyone was set for the photos without thinking much about themselves. It was a mixture of families and it all reminded the designers of the families they left behind.

Everyone contacted their parents and loved ones with this challenge. They wanted to touch base with the people that knew the best and who would support them no matter what. Just being able to talk to their families had left most of them in a good place, but this challenge caused a lot of stress and there was some self-pity in the workroom. The designers had to dress the perfect family and it was hard for some to do that and be themselves. Dmitry wanted his almost gothic outlook for his family for the challenge and so the others started to talk behind his back. They questioned if he bit off more than he could chew and one of them thought it was Dmitry’s worst looks. And then there was Biddell.

Biddell was more concerned about the competition than he was about his outfits. He thought that Michelle got the cute old grandma who wanted to wear something funky and fun, but he also Irina got lucky as well because her family has this cute little boy who quite a jokester. The ladies didn’t have to worry about their looks as long as they have someone cute enough to pull it off and they both did. Only Biddell had kids that wanted to be cool and a mother that didn’t want to look too out there. She sort of stayed on top of Biddell to make sure he didn’t add anything she thought was weird-looking and. She wanted a good clean look for her family and that’s what she got. And so Biddell didn’t get the chance to put his own print on the family.

Irina, on the other hand, had focused on making the cute little boy look cute. She didn’t even think about cohesion and that was something that all of the others had in their bag. Michelle gave her family all funky colors to match up with grandma, Dmitry’s family looked futuristic, and Biddell’s family all had one piece to match up with someone else in their family. So the majority looked like they were actually related! Then come Irina’s look and the two women both looked great in everyday pieces but the one to get the most attention was the little boy. He became the highlight of Irina’s designs and he went on to become the focus of the photoshoot. The little boy was staged to stand in the middle and the two women in his family were leaning in on him.

Irina took a risk with what she did, but ultimately her family and all the others had been happy with what the designers pulled off. They had worked for days to get a whole family camera ready and there wasn’t a single person that wasn’t appreciative of that. They later enjoyed themselves with the photo shoot and everyone had a laugh walking down the runway. But then came the critiques. The judges did come down on Irina because they said there wasn’t enough cohesion with her family. They all were wearing some navy in their outfits and so if Irina had done some additional changes then they could have been perfect on the runway. Especially as the judges all thought the little boy was adorable.

Dmitry had one great look with two subpar looks. The judges wanted there to be some extra refinements and it didn’t help that Dmitry was so defensive. He kept going on about how the young man’s outfit was something he would like to wear and that he didn’t see a problem with the neckline because that was something he loves but this challenge wasn’t about him. It was about the family and how they looked. The judges thought Dmitry could have done better on this one and they found it overall to be disappointing. The judges also thought that Biddell’s family was best with cohesion because while there were one or two things they would have liked to change it still made for a great portrait.

Only Michelle got called out for her print. It was perhaps too out there for this particular challenge and so there was no one that was perfect tonight. They all had some slip-ups and the judges had to decide who came close enough to the challenge to have won. Plus, they made a decision on whose collection they wanted to see at the end and so that helped clear away any confusion for them.

In the end, the judges named Biddell the winner of the challenge and surprisingly they eliminated no one.

The judges couldn’t choose between Michelle and Dmitry and so they chose to send all four to the finale!