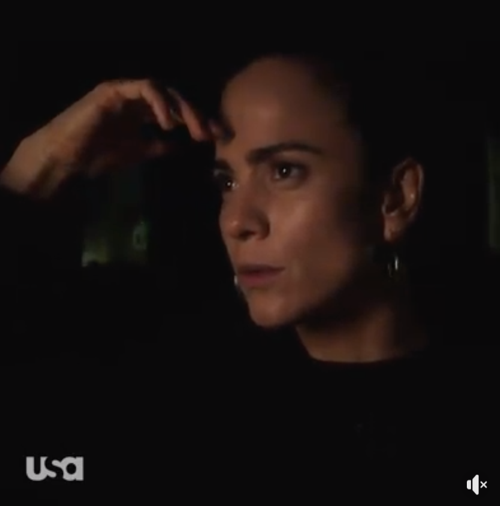 Tony was in a dark place right now. He overheard Pote admitting that he killed Tony’s father and that only made Tony resent the position Teresa put him in. She was the one that kept leaving him with strangers even as she promises that they were in it together, but Tony tried to bring it up to Teresa. Teresa didn’t hear everything, only she heard enough. She knew Tony was unhappy and she wanted to do something for him. Her mistake was in wanting to wait. Teresa wanted to do something for Tony after she came back from Nashville. The Nashville trip was more important to Teresa because she was meeting her boyfriend’s friends and so she ignored the situation at home. Even as it remained unsettled.

Teresa also didn’t take her people with her. She wanted the trip to be genuine and so she hadn’t wanted to bring bodyguards with her. Teresa gave both Pote and Javier the day off. They were free to do whatever they wanted and they made some poor decisions with their newfound freedom. Javier realized the man he killed was Judge Lafayette’s nephew and so he was focused on covering his tracks. Pote meanwhile was focusing all his energy on Tony. Pote knew they couldn’t wait to deal with Tony because they had to deal with him now. Pote didn’t know how to deal with a troubled kid and so he fell back on something he thought they both might like. Pote took Tony shooting with a hunting rifle.

It gave Tony one of the things he wanted. He wanted to train with a gun because he thought he could be useful to Teresa that way and she wouldn’t abandon him again if he was one of her men but going with Pote wasn’t ideal. Pote tried to treat Tony as a son and Tony pushed him away. Tony admitted he only had Teresa. He said his parents were dead and that if he couldn’t have them then he didn’t want a substitute. Tony, after all, came from a loving home. His parents doted on him and they loved him more than anything. His father wasn’t a good guy and still, he managed to keep that away from his family for a long time. Tony’s father eventually failed in that duty and yet that didn’t stop Tony from memorializing him.

What Tony needed, now that everyone else was gone, was Teresa. Teresa didn’t seem to comprehend that tiny bit of untimely truth because she was off making her own mistakes and the first was leaving her men behind. She should have known that she was too important to leave unprotected. Teresa was followed from New Orleans by a familiar sicario. He was the same guy that went after Tony and his whole objective was to take down Teresa any way he could. The sicario was hired by a man that’s dead now. He couldn’t receive any more orders and somehow he didn’t let that come between him and his objective. The sicario was going to keep hunting Teresa until he kills her.

The man followed her to the hotel. He then cut the power and was slowly making his way towards her when she armed herself. Teresa suspected something was up the second the lights went out. She spotted a tray in the hallway and grabbed a knife from it because she thought the attack was coming right then though no attack came. Her would-be-killer wanted to toy with her first. You would think he would be like the Terminator and want her dead right away, but his patience even as he pursued Teresa was quite odd. No one else would have done that. Pote was actually taking Tony hunting because he wanted to show the young man to take the kill when the opportunity presents itself and so hesitation is new.

Javier for one didn’t hesitate when he found the car at the junkyard. He left the body of Rene Bardot in the trunk of the car and he had been pretty desperate to get it back. Javier bribed his way into retrieving it and that’s when he learned the battery was dead. That was when he needed the man that ran the place to give him a boost. Javier spent so much time at the junkyard that the manager saw the news. The news was reporting Javier’s car as suspicious because it was near the scene when Rene disappeared and so it didn’t take the manager long to put it together. He knew that Javier was up to something and unfortunately Javier killed him before he could do anything about it. Javier tried to rein the situation in and all he did was create more problems.

His girlfriend Emilia had come back to Junkyard because she wanted to mention something to Javier, but then she witnessed him killing someone and that wasn’t going to be the last time. Javier again tried driving the car away and he was stopped by police. He killed those officers as well. Javier was creating a body count and he was doing so in front of the love of his life. Javier was going off the rails and there was no one there that could stop him. Pote was still off in the woods with Tony and Teresa finally figured out the sicario’s game. The hitman had gone to Eddie’s concert looking for Teresa and she had to battle him backstage. Teresa coming out on top was by pure chance and she used what little the sicario had left to question him.

The hitman told her that “he” said to make it slow. Its why he’s been following her and making her question everything. The sicario was sent to play mind games and so that at least explained the hesitation. Teresa also tried asking about this “he” because she suspected it was Cortez, but she never did get an answer. The hitman died and Teresa suddenly had to come up with a plausible story to explain her bruises. She later told Eddie that she slipped on a bathmat. She also claimed she was too embarrassed to go see Eddie’s concert and that had been important to Eddie. His bandmates were his family. He wanted Teresa to understand what it meant to him to play with them again. And she missed out on that.

The trip back to New Orleans was an awkward one. Eddie thought that they could recover whatever ground they lost in Nashville and Teresa felt they should break up. She liked Eddie and so that wasn’t the problem. She just thought her life was too chaotic right now for a relationship. She broke up with him because she needed to handle her business and so once again she losses a good man. Teresa came back to her business and her men and who knows how long she’ll have one.

Pote figured out Tony was angry enough with him to kill him, but Tony had the chance and he couldn’t go through with it. Tony loves Pote and he’s as close to family as he got. So Pote walked away unscathed and with a new insight into what’s going on with Tony.

Javier, on the other hand, left behind a key piece of evidence when he killed those officers and so now the police were looking for Emilia because they found her earring.