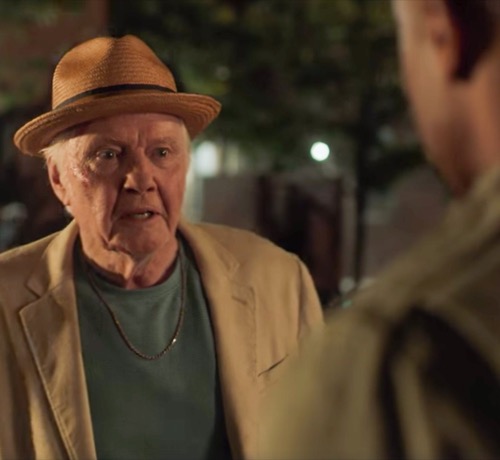 Tonight on Showtime Emmy Award-winning drama Ray Donovan airs with an all-new Sunday, December 15, 2019, episode and we have your Ray Donovan recap down below.  On tonight’s Ray Donovan season 7 episode 5 called,  “An Irish Lullabye,” as per the Showtime synopsis, “Ray and Terry travel to Coney Island to track down Ray’s missing car. Meanwhile, Mickey, Daryll, and Sandy continue their quest for the truth about the 1977 heist.”

Tonight’s Ray Donovan season 7 episode 5 is going to be exciting.  So be sure to bookmark this spot and come back from 10 PM – 11 PM ET for our Ray Donovan recap.  While you wait for our recap make sure to head over and check out all our Ray Donovan news, recap, spoilers & more!

Ray comes out of the room to see Jim after spending the night with Molly. He asks Ray how he has been. They talk about Ezra, making small talk before Ray leaves.

Mickey is torturing an old acquisition for information while Sandy watches. Mickey wears something over his face but the guy knows who he is. After Mickey leaves the room, Sandy shoots him. Daryll waits upstairs anxious.

Bunchy wakes to the phone. It is the mother of the teen boy he shot. She cannot believe he is suing her. Bunchy tells her he isn’t behind that. He asks how she is. She explains her kid needs spinal surgery before hanging up.

Ray is in therapy. He talks about Molly and how she is nice. He will screw it up like he always does. Ray notices his therapist is shaking. He asks if Ray wants to talk about his Parkinson’s. Later, Ray shows up to see Terry at his apartment. Terry admits he hasn’t been taking his meds.

Ray returns to Terry’s with food and tells him he filled his prescription. He forces Terry to sit up and take his meds.

Bridgett admits to Smitty she slept with Adam the other night. He cries. This makes Bridgett mad. She storms off. Ray and Terry are on the subway. Terry asks about therapy and what he does in there.

Ray tells him that he talks about Bridget, his day. He suggest maybe Terry talk to his therapist who also has Parkinson’s. Terry tells him he does not need a therapist.

The Sullivans are in a family meeting. Jim gives Molly a spot on the board with the percentage of the profit of your business and an annual salary. Jim also gives control of the company to Kevin but not his son Declan. The two get into a fight. Declan would break his neck if he wasn’t already dying.

Adam calls Ray’s office for help with a client. Smitty answers the phone he doesn’t say much, just offers to help Smitty leaves the office with a baseball bat and an angry look.

Smitty shows up and beats Adams car before beating him with a baseball bat. Meanwhile, Ray and Terry get the idea to go on a roller coaster. They show up at the amusement park. Mickey, Darrell and Sandy steal one of my Mickey’s old acquaintances from the nursing home. He has terrible memory and doesn’t know what’s going on. They take him out into the woods.

Mickey has a plan to use electric shock to try to stimulate his memory. Darrell tells him it’s the stupidest thing he’s ever heard of. The guy gets out of the car and attacks Mickey before taking off  with Sandy in his arms. He trips, throwing her across the ground. All three of them try to take him out but he is too strong and angry. Sandy finally strikes him of the rock. They drag him back to the chair and electrocute the truth out of him. He admits to Mickey that they used him as a fall guy. The man admits to Mickey that he recorded everything but before Mickey can find out where those tapes are the man dies.

Ray and Terry talk About Terry’s illness and how he wants to go out on his own terms just like Abby did. This makes Ray angry. Bunchy wears a mask and robs the value drug mart.  Terry and Braden want to get raise car from the impound lot after it is towed. When the guy gives them a hard time Terry knocks him out.

Molly calls Ray. They make plans to meet up that night. Bridget and Smitty finally come face to face after he beats up Adam. Ray and Terry hit a deer on the road. Terry tells Ray to get his gun.  The deer is suffering.  They put her out of her misery.

Bunchy meets with the mother and the doctor who can save her son. They don’t have enough even after using the money Bunchy robbed.

Ray and Terry head back to his apartment. Ray watches Terry as he hums and Irish song as the two sit and drink a beer. Ray leaves after Terry falls asleep, pausing at the door to look at his brother. He heads to meet Molly at a bar.