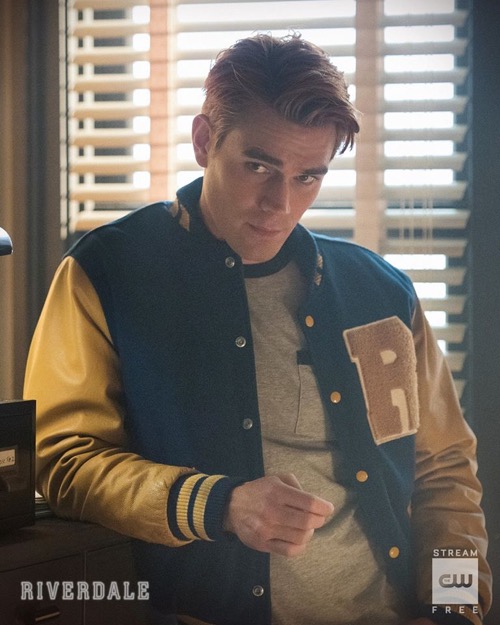 Tonight on CW their drama Riverdale airs with an all-new Wednesday, November 13, 2019, season 4 episode 6 called, “Chapter Sixty-Three: Hereditary,” and we have your Riverdale recap below. On tonight’s Riverdale season 4 episode 6 as per the CW synopsis, “Archie struggles to keep the neighborhood kids away from Dodger’s influence and turns to an unexpected ally for help.

Jughead uncovers a mystery surrounding the author of the Baxter Brothers books, while Betty confronts Charles about his past. Finally, Veronica deals with a major shake-up at home, and Cheryl and Toni get some unexpected visitors at Thistlehouse.”

Tonight on Riverdale, Dodgers minions are seen breaking into a car and Archie is seen saving the kid by helping him get on the right path by getting a job at the diner and this upsets Dodger. Archie comes to his center and finds it’s trashed he asks FP to go after Dodger. Archie is patrolling around his center to keep Dodger away. He decides to keep the kids busy by getting them arcade games. Hiram visits Archie at his community center to give his condolences for his father’s passing and make a donation in his honor to the community center and offers him a blank check but Archie declines.

Jughead is having writer’s block,Betty suggests he relax. Jughead reads over the Baxter Brothers series books and feels that his grandfather may have written the first book of the series.

Cheryl is having nightmares about Julian needing a body. Cheryl begins to miss school and decides to bind the evil spirit in the doll with a circle of salt. One of the twins has an accident while Cheryl is at school, she rushes home to find the doll escaped the circle and is met with her aunt cricket and uncle Bedford at the house and passed out. They want to sell the family maple syrup company and she says no once they ask to go visit the chapel which upsets her.

Hiram wants his family to move forward and wants to establish a run family business and wants Hermosa to help Veronica run the speakeasy but she declines. Hiram and Hermosa visit Veronica at her club. Hiram shows up at the house and asks Hermoine to let him back home and come back to his side and they begin to kiss and get intimate.

Archie gets the arcade games but none of the kids are there since Dodger offers them free pizza, so Veronica offers them burgers and fries. The children show up at the center to enjoy the game night, Dodger shows up to confront Archie upset that he’s doing good for the community and keeping the children out of trouble, he figures out that Archie is the guy behind the mask, Veronica comes out to tell him the cops are en route and he leaves. Archie comes home to find a hooded mask hung to his home door with a knife he rushes in to tell his mother they have to leave and go to a hotel but seconds later gunshots ring out through his home windows, thankfully no one is harmed. Archie calls on Hiram to help him with the Dodger incident but he tells Archie he can’t help. Archie and Reggie find Dodge’s body wrapped in a rug outside his community center and take him to the hospital.

Cheryl takes the doll and drowns it in a tub of water to try and rid the house of Julian and evil spirits. Her aunt and uncle’s tell her they plan to have her committed and declared unfit so that they can sell the families maple business, she yells at them to get out. Down at the chapel Cheryl’s uncle discovers her shrine and threatens to go to the police and have her arrested, Toni comes to her defense and they get into a shoving match and she hits him with an object knocking him down unconscious on the floor. She then tells her aunt to leave the home.

Hermoine decides to let Hitam move back in and this upsets Veronica, Hiram feels Veronica is jealous of Hermosa and he reassures her that Veronica is his favorite Veronica says it has nothing to do with sibling rivalry and storms off. Hermosa comes to the diner inviting Veronica to her parent’s vow renewal but She refuses to attend.

Jughead finds proof of a book written before the Baxtet Brother series proving it’s his grandfather’s writing in the first Baxter book due to the similarities. Jughead meets with Mr. Dupont and accuses him of not writing the first book stating it was his grandfather and he takes offense to Jughead accusing him of plagiarism and tells him to get out before he gets him expelled from the school. During class Mr chipping says he’s sorry he couldn’t help Jughead and jumps out the window, Mr. Dupont takes over Mr chippings place.

After Betty’s visit to jail, Chic turns around and reveals to authorities of the murder that Betty and her mother have done and claims to know the location of the body. Betty’s mother is upset and scared the go to jail asking Betty why she even went to see him but Charles and FP take the lead to remove the body to prevent the police from finding out the truth. Back at the jail Charles visits chic and they call each other “babe” and it turns out they are lovers and it was their plan all along to have Charles find the body and help get rid of it.