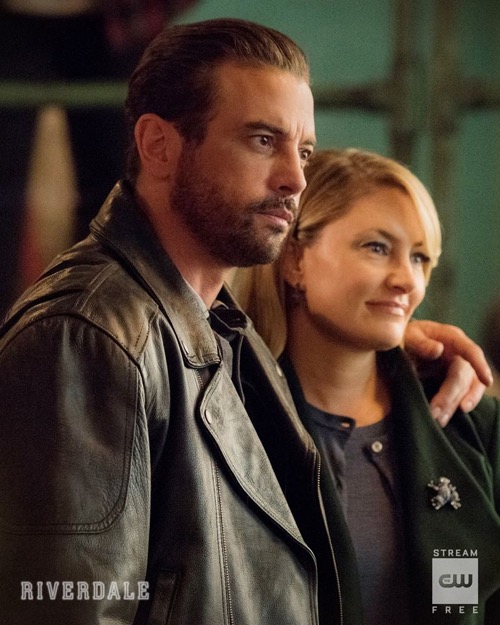 Tonight on CW their drama Riverdale airs with an all-new Wednesday, November 20, 2019, season 4 episode 7 called, “Chapter Sixty-Four: The Ice Storm,” and we have your Riverdale recap below. On tonight’s Riverdale season 4 episode 7 as per the CW synopsis, “Archie’s plan to host a peaceful Thanksgiving dinner at the community center quickly gets derailed when some unexpected guests arrive. Stranded at Stonewall Prep by an ice storm, Jughead and Betty search for clues about a recent death on campus.

Elsewhere, while FP, Alice, Hiram and Hermoine wait out the storm together at Pop’s, Cheryl and Toni get resourceful as they host a dinner for Cheryl’s family.”

Archie couldn’t celebrate Thanksgiving like everyone else. This year was all about what he had lost. Archie buried his father and he couldn’t find anything to be thankful for. Not that he was skipping the holiday entirely. He was still keeping the community center open over the holidays because he wanted the kids to feel safe this Thanksgiving and so he was making them about them. He received help from his friends. They came through with the food and everything was set until suddenly the Mayor decided to mess with him.

Mayor Lodge decided to shut down the community center over the holidays. He came up with a lame excuse and everyone could see it for what it was. Most especially Veronica. Veronica wasn’t playing ball with her father. She didn’t go to his swearing-in ceremony and she wasn’t hanging around her sister. She refused to have anything to do with her dad. Its why she told him that she would be helping out at the community center and then she next thing she knew the center was being closed.

Lodge shut the place down because he wanted to force her into Thanksgiving dinner. Only she still wasn’t going to do eat with him like they were some happy family and so she destroyed their dinner on her way out the door. Veronica was still going to the community center. She and the others talked it out with Archie and he wanted to go through with hosting Thanksgiving there. They were all technically breaking the law and they didn’t care. They weren’t going to leave a bunch of underprivileged alone to fend for themselves.

Hiram and Hermione, however, were left without dinner. They couldn’t order anything in because a large ice storm was heading their way and no one wanted to go out into it. So they went to Pop’s where they ran into Alice and FP. Alice and FP had the same idea of having their dinner at Pop’s because the kids were all gone for the holidays and so Alice invited Lodges to have dinner with them. It was a little bit awkward because FP was back to working for Hiram. He also hated how he had to shut down the community center.

Even if the center wasn’t closed. Archie was welcoming everyone to dinner when a couple of Dodger’s relatives came by. Dodger was the drug dealer recently found outside the community center and it turns out his relatives thought Archie had something to do with him being in the hospital. Its why they went to the community center. They showed up en masse and with a gun. They then used that gun to get answers. They questioned Archie and he swore neither him nor his friends had anything to do with Dodger being in the hospital.

Dodger’s family wasn’t sure to believe him. They decided to stick around anyway because they said Dodger’s assaulter had an attachment to the community center and so they thought their culprit would come forward eventually. The entire community center was then taken, hostage. It would have been a great time for the police to show up and unfortunately, they were either celebrating the holidays or trapped by the weather. The weather got really bad. It left Jughead and Betty deserted at Stonewall with two others.

They tried ordering takeout and were met with the same problem as everyone else. No one wanted to go out into the storm. Betty and Jughead were simply going to raid the vending machine and that’s when they ran into Bret and another student. Jughead and Betty could have ignored the pair and instead they used the opportunity. They were investigating Mr. Chipping’s suicide. They wanted to know if it had anything to do with DuPont and Jughead had a theory. He believes Chipping was involved in a secret society known as Quill and Skull.

Jughead also believes Bret and possibly even Donna is a member of this secret society. He tried to ask them about it and they denied all knowledge of it. Then Jughead found a tiepin in Donna’s possession. The tiepin is a direct tie to the secret society because they use it to identify other members. Its why they monogram it and so Jughead checked the monogram on the tiepin. It said RC. Those aren’t Bret’s initials and they weren’t Donna’s. If anything they belonged to the late Rupert Chipping.

Rumor has it that Chipping had to tell his worst secret in order to join. That same secret could have forced him to kill himself and so Jughead and Betty confronted Donna over the tiepin. They thought it meant she covered up a murder. She instead said Chipping gave her that pin because they were having an affair. She had tried to end it and she even told him she’d report him if he didn’t leave her alone. The next day he killed himself. Donna said she wasn’t sure if he did it because of her and so Jughead was willing to buy her story. And Betty was the one that was skeptical.

Betty suspected the whole story could have been a lie to get them to back off. She and Jughead also didn’t want to waste the whole holiday over this mystery and so they had their own celebration where someone recorded them together. Meanwhile, Archie and crew were able to fight off the Dickenson’s. They did it thanks to Mary’s fast-thinking and so they happily returned to their celebrations now that they had gotten rid of Dodger’s relatives. Who then went on to break Dodger out of the hospital.

Speaking of relatives, Cheryl finally got Aunt Cricket to back off. She invited her aunt and cousin to dinner and once they were full she informed them she fed them, Uncle Bedford. Cheryl then threatened to report them for cannibalism if they ever tried to interfere in her life again. So, she won. She got rid of her pesky relatives and so it didn’t matter that the creepy doll was still in the house.

She still got to enjoy her holidays, though. FP got into an altercation with Hiram and it was all behind him once he realized he could be Sheriff as well as a gang member. Alice had given him the idea and it allowed him to spite the new mayor.

Like how they later put up a plaque in Fred’s memory at the community center.

It was a way to honor him and to show the mayor he couldn’t stop them.