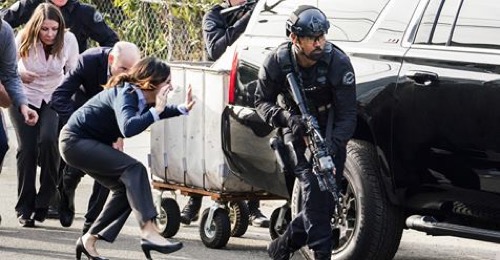 Tonight on CBS their new show S.W.A.T. inspired by the television series and feature film airs with an all-new Thursday, February 21, 2019, episode and we have your S.W.A.T. recap below.  On tonight’s S.W.A.T. season 2 episode 16 called “Pride” as per the CBS synopsis, “The SWAT team struggles to maintain peace on the eve of a Los Angeles LGBTQ pride festival after a hate crime sparks citywide anger that ignites further violence. As Chris grows anxious for her fellow LGBTQ community members calling for retribution, the festival reunites Commander Hicks with JP, his estranged gay son.

Also, Street fears his mother will be sent back to prison when she fails to check in with her probation officer, and Deacon gets unexpected medical news about his newborn daughter.”

A conservative pundit on the radio made some inflammatory remarks. He claimed that the Pride Parade was making everyday Americans complicit in immoral behavior because the State used their taxes to throw said parade. He also went on to ask his viewers to come to Los Angeles because he needed as many people to stand against “those” people and a pit stop to the parade itself, but while the guy behind the radio might have been blowing smoke, he clearly incited his base. He had one listener who decided to do more than just protest and so he ran over a homosexual couple. The perp then ditched his car and was considered a security risk.

The police were informed of the threat and SWAT was tasked with handling the security of the parade. Hondo and his team were given a busy area that could see upwards of a hundred thousand revelers and so they thought all they had to do was protect LGBTQ community, but then someone representing their side decided to take the law into his own hands. Micah grabbed a gun and broke into the radio station. He then took everyone hostage and demanded that no one else attack his people or he was going to start shooting hostages. All Micah wanted was to protect the LGBTQ community during the parade and let them celebrate in peace.

Micah told the whole world that no longer will they be bullied or persecuted and the only one that could truly understand on SWAT was Chris. Chris asked for the opportunity to talk to Micah. She believed she could reach through to him and so she was offered her chance, but the rest of her team were also asked to go through the back. They were there to intervene if negotiations went sideways and Chris didn’t want that as much as the next guy. She later called into the show and she spoke to Micah. She told him how she was one of him and that she didn’t want to hurt anyone else because all it did was prove guys like Storm’s side.

Storm was the loudmouth pundit that pushed them as far as they were willing to go and then call them thugs when they tried to defend themselves. Chris asked Micah not to sink to the man’s level and at first, it looked like he was listening. Then the guy that ran over those people called into the show. The driver had wanted to brag about killing those people and he said that he was going to retaliate for what Micah did as well. He said he was about to kill more people and that made Micah snap. He was about to start killing the hostages when SWAT moved in and arrested him. Micah was being transported to a holding a cell when someone took a shot at him inside the police car and he died instantly.

Micah was murdered in police custody and all that did was worsen the situation. There were protestors championing Micah as a hero of the cause for trying to do something and there were protestors that claimed people like Storm were the moral leaders of the cause. Both groups were threatening violence and SWAT couldn’t seem to get through to either side. Storm was happy to be in protective custody, but he didn’t want to tell his listeners to back down because he still feels like he was a superior one. He even dared to condescend to Hondo because Hondo was both black and a police officer who Storm says

In the middle of a possible riot breaking out, Street heard that something was wrong with his mother. Karen has reported in with her parole officer and she hadn’t shown up at work. She was just gone! Street had no clue about what to do with her because he had basically cut her from his life and so a part of him wondered if Karen wasn’t pulling a disappearing act for attention. Street tried to call and visit and his mother ignored all of it. Which wasn’t like her. Karen would jump at the chance of being in Street’s life again and the fact she couldn’t be reached was worrying her son because he thought that something might really be wrong.

Street was advised to report his mother as a missing person. He thought about it and he didn’t want to do it because he worried that if she was found breaking parole that she would get thrown back into jail, but Hondo told him to do whatever was best for his mother. It was the one thing that Hondo always respected about Street and so he shouldn’t change that about himself. Street penciled his final decision about his mother for later and he worked with his team to focus on the threat. They went through numerous episodes of Storm’s show and they recognized the voice of their terrorist. It belonged to a guy named Dennis who called in several times in the past and who bragged about working with a group.

SWAT and the LAPD considered the possible threats to the parade and they realized that the gang they were looking into had commandeered some trucks. The plan was to drive the trucks into the crowd. The team went onto block all access points to the parade and they sought several trucks, but there was one truck that was missing because it wasn’t on the traditional roads. It wasn’t going for the parade, it was going for the volunteer tent where Hicks’s son was located. So Hicks also had a hand in stopping Dennis from killing people and he had been happy to arrest the man. And he even checked on his son JP afterward to make sure that he was alright.

Only Deacs messed up. He had used his car to slow down the truck and so he had needed surgery. He was going to be okay and with rehabilitation, he will be back on his feet in three months. So it should have been fine because he was the hero and everything, but Deacs had gotten a loan from a shady character for his daughter’s surgery and he said that he would pay back the loan in a month because back then he thought he would have earned the overtime. And so his mistake could mean this loan shark will come after him.