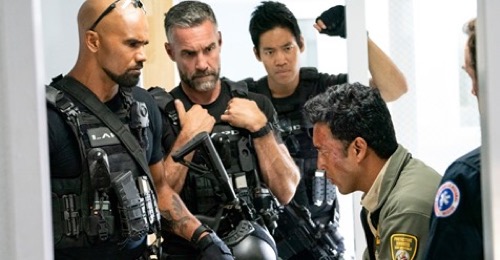 Tonight on CBS their new show S.W.A.T. inspired by the television series and feature film airs with an all-new Wednesday, October 9, 2019, episode and we have your S.W.A.T. recap below. On tonight’s S.W.A.T. season 3 episode 2 called “Fire in the Sky” as per the CBS synopsis, “In the Season 3 premiere, the SWAT team works with Lt. Piper Lynch, a senior LAPD Hollywood Division officer, when the mayor assigns her to oversee city departments joining forces to stop a serial bomber using drones as detonation devices.

Also, just as Hondo settles into legal guardianship of his teen charge, Darryl, his home life becomes more complicated when his estranged father unexpectedly moves in.”

Lynch is conducting an office review on the team to add more members but Hicks feels as if there is a different motive. Luca has an idea to get the other team members to open up a Guatemalan food truck with him but the members don’t have the funds financially.

She initiates a plan that involves help from an accomplice who poses as a new custodian and smuggles in a gun to help her escape, the team rally’s up all the patients running loose and wild only to discover Ruth is gone.

After some investigating the team discovers the three people including the fake custodian are her sons. New evidence emerges that Ruth is planning a do-over of the suicide temple massacre and that ex-members of the cult are helping. Tan follows a lead on one of Ruth’s son Theo as he’s breaking into a car, he runs off and shots are exchanged and he has nowhere to run.

He’s cornered by Tan but he pours gasoline and lights himself on fire and runs towards Tan prompting them to shoot him and kills him instead of being detained. Hondo goes to talk to an ex temple member Kai who has opened up a place for members who want to escape, he wants him to help figure out the thinking of Ruth and her new doomsday plans.

Hondo gets information from Kai that Ruth has about 35 followed going to sacrifice themselves, Chris and Deacon try to help the Clare who is missing and pregnant that is being held captive by Ruth.

They get a location on where she is but they soon learn the woman isn’t Clare and not pregnant it’s a decoy and a distraction. Ruth heads over to a motel to track down two cults Josh and Jasmine cult members who are trying to flee and force them to join the suicide mission they are being held captive by gunpoint by her and her sons, they are the last member needed to make the 36 which she claims her convoy to fulfill her plan.

They have the member who acted like Clare into custody and Chris interrogates her to try to get information on a location as to where Ruth is headed. The team follows a lead to a park where Ruth is.

Ruth is gearing up her plan and she has her followers in a circle and pours gasoline on four members bound and gagged in the center, as she’s about to set them on fire the SWAT team stops her and gunshots are exchanged between them and her sons, Ruth and her son Ben escape with hostages, Deacon and Hondo goes after them, Deacon saves the hostage Hondo corners Ruth in a abandoned shed, and as she points her gun at him Hondo takes his shot at Ruth hitting her in her leg.

Chris takes the real Clare into custody as she is the one who’s been recruiting members to the cult. Kai issues an apology to Hondo for pulling a gun on him years back when Hondo first responded to Ruth and Wayne’s suicide massacre.

Hondo invested in Lucas food truck . Lynch is moving into SWAT headquarters as an outside consultant as she and the mayor plan to utilize the SWAT team more on the streets and make changes in the department which doesn’t sit well with Hondo or Hicks.