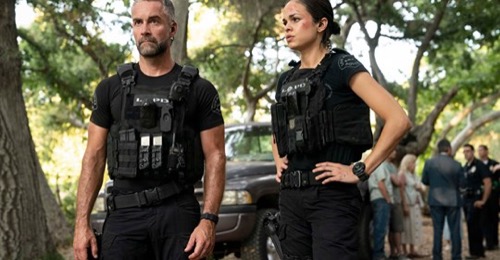 Tonight on CBS their new show S.W.A.T. inspired by the television series and feature film airs with an all-new Wednesday, October 16, 2019, episode and we have your S.W.A.T. recap below. On tonight’s S.W.A.T. season 3 episode 3 called “Funny Money” as per the CBS synopsis, “The team bumps heads with Lt. Lynch when she signs them up for an off-book undercover operation to take down a local gang printing counterfeit money without giving them enough time to prepare for the mission. Also, tensions rise at home for Hondo as his parents’ strained relationship becomes worse.”

Tonight on SWAT, while having breakfast Hondos parents get into an argument over the visiting schedule that Darryl doesn’t adhere to. Lynch and the mayor have plans to make the SWAT team more proactive in the community.

Lynch feels the team should be out in the field instead of spending so much time training, Lynch gives Hondo an undercover mission to stop a gang member from printing fake currency to buy firearms and possibly start a street war.

Hondo feels its not SWATS role but for the FEDS, but Lynch says he and the mayor have faith in him, this pisses off Hicks at first but Lynch tells him to think of the rewards it’ll have for the department.

The plan is to intercept the delivery of the ink needed to print the Money and swap out the driver and place SWAT members Chris and Street in place, they infiltrate to the warehouse and make the delivery to the man printing the money and street suggests to get paid in the fake money instead of the real making it looks like they are ripping off the original driver Adam and cutting a side deal.

While outside the gang members’ home base deacon and Luca discover that they are planning a nationwide war.

Hondo tries to talk to his mother and tells her to forgive his father and invites her to a car show the rest of them will be at and she says she’ll consider.

The team sweeps in and arrests the counterfeiter Corbett and seize the $5 million he’s been printing for the gang Los Altos they offer him a chance to flip the gang in exchange for his freedom, he agrees to call his contact and set up an new time and location for the exchange of the money not knowing that the head gang members plan on killing Corbett, Street, and Chris during the exchange fearing they all know too much and are witnesses.

During the exchange the gang member Gomez takes the money and instructs Corbett into the back of the van while pointing a gun at Street, the team moves in and rescues them and go after Gomez and the money which they retrieve.

Even tho it was a risky mission Lynch had confidence in the team and told the mayor and now the team may be getting more funding from the budget. Hondo and his family attend a car show and his mother shows up and Darryl senior has hopes that they will reconcile.