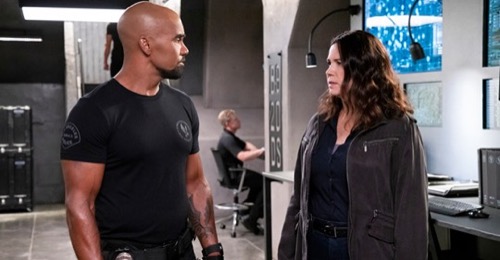 Tonight on CBS their new show S.W.A.T. inspired by the television series and feature film airs with an all-new Wednesday, November 6, 2019, episode and we have your S.W.A.T. recap below. On tonight’s S.W.A.T. season 3 episode 6 called “Kingdom” as per the CBS synopsis, “The Harrelson’s engage in a tense family reunion when Hondo’s older sister, Winnie, begrudgingly arrives in Los Angeles to see their sick father for the first time in decades. Also, the SWAT team searches for an abducted Middle Eastern human rights activist.

Hondo surprises his big sister in Vegas. He tells Winnie their dad has cancer. She is sorry to hear that but doesn’t want to see him. Hondo began to talk to him. Meanwhile, Rocker and Molly make plans to hang out later while Dom tries to talk Vic and Chris into the food truck scene. He just bought a truck that was ceased by the police. When the truck pulls up Rocker is out. The thing is too rusty and looks like a former meth lab.

Chris and Vic are at a rally for human rights with several important political figures. Vic spots a suspicious man who pulls a gun within seconds of being spotted. Two suspects grab a foreign governor, Amina, and head off.

Hondo brings Winnie to see their dad. They make nice for a little before Winnie lashes out at him for leaving their family to start a new one. Their dad tells her to say what she needs before he starts to cough. Winnie leaves. Hondo chases after her. She tells him she can’t forgive him.

Back at SWAT, Honda is updated on the kidnapping of Amina. He and Chris meet with her bodyguard. He tells them how she has been getting threats. They meet up with Deacon who tells them he thinks the bodyguard may have been in on it.

After some investigating, they think they have a suspect. They head to the residence of the man they are interested in. They take out one man with a gun with another strapped to a charge. He has been beaten. He tells them this was all a hoax and Amina was in on it. Amina is headed to leave on a plane. They head to get her.

SWAT arrives at the airfield too late. Hondo gets intel from the boss that Amina’s boyfriend flew in yesterday. It looks like he planned to escape with her. They send out a crew but fail again to get Amina. They manage to get her boyfriend and bring him in.

Chris talks to Amina’s boyfriend. He tells her he can’t give Amina up, he promised. Chris tells him that the bad guys are going to get her. They need to get their first. Before they leave, they see Amina on the news. She has shared a video admitting to the hoax to frame her own government. She plans to head home and accept her punishment of treason. Her boyfriend tells them there is no way she would do such a thing. They head back out to save her.

SWAT arrives at the waterfront and boards a large boat where they think the enemy has Amina. Gunfire erupts outside. Amina is out there and being held hostage as Chris tries to make a clear shot at her attacker. She takes the man out. They bring Amina to safety.

Hondo and Winnie talk. She needs a ride to the airport. He tells her he is headed that way to go see their dad who has surgery in an hour. Hondo taking the high ride makes Winnie offer a little time before her flight.

SWAT hangs out outside enjoying Dom’s food truck that he managed to overhaul. Molly and Rocker enjoy their date while Hondo and his sisters spend time with their dad.