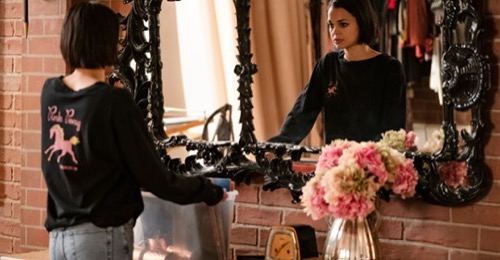 Tonight on CBS their new show S.W.A.T. inspired by the television series and feature film airs with an all-new Wednesday, November 27, 2019, episode and we have your S.W.A.T. recap below. On tonight’s S.W.A.T. season 3 episode 9 called “Sea Legs” as per the CBS synopsis, “The SWAT team joins forces with the Los Angeles Organized Crime division to recover an officer abducted during a failed undercover operation.

Also, Chris struggles with how to comfort the kidnapped officer’s parents when she is restricted from giving them certain details of the investigation.”

Sergeant Ben Sikora of LAPD Organized Crime turned to SWAT for help. He has a Code Red situation with one of his officers that went dark. The officer’s name is Ava Ilic. She was of Serbian descent and it meant she was the perfect officer to play a Bulgarian madam. Her cover story was that she was looking for girls so that she could open up her brothel and that she willing to pay any price for them. Ilic and her sergeant were investigating a human trafficking ring, The ring was being run by a Bulgarian crime lord and so he naturally came to trust Ilic because he initially believed they were two sides of the same coin.

The Bulgarians were only ever going to trust other Bulgarians. Its why Jakob Varga allowed Ilic to get close to him and his organization. They were “working” together just fine until he began questioning her story. He asked around and no one remembered her from Bulgaria or the village she claimed she grew up in. There were also several other things that were suspicious. Ilic, for example, carried cigarettes with her and yet she was never seen smoking. It was odd. Varga had decided to test her lighter one day and he found out it didn’t even work. And it didn’t work because it was secretly a recorder.

Varga found out when he smashed it open. He then had his men grab Ilic and that was the time she was seen or heard from. Her sergeant was worried. He thought she might have been killed and the only way he was ever going to get answers as if he located her. That’s when he turned SWAT. SWAT was good at breaking down doors and they broke several until they eventually got a lead on the situation. They confirmed that Varga found out Ilic was a spy even if he didn’t know who she works for. The team also learned that Varga was leaving town. He sent his girlfriend to go collect a bag of cash and her that as well as a teenage girl in the trunk of her boot.

The girl was fifteen. Juliana had been smuggled into the country with two other girls and they were later separated. Juliana was shown off to Ilic who tried to purchase her, but Varga pulled the teenager away and she didn’t know what happened next. Juliana never got the chance to see it. Hondo’s team followed the lead she gave them and they found the warehouse. It had been abandoned. Varga and his people were gone and all that was left was Ilic’s broken recorder. That frightened her sergeant. He said Varga either believes Ilic was a cop or a rat and either of which could be a death sentence for Ilic.

Sikora has been running Organized Crime for ten years. He has never lost an undercover cop before and he didn’t want Ilic to be first. Hondo tried talking him down. Only there was no stopping where his mind went the more they heard back from Varga’s men. Varga told his people that Ilic was a rat. He knows he couldn’t trust and so he has no reason to keep her around. He could have killed her at any moment and everyone knew she might be dead. Its why Chris didn’t want to lie to Ilic’s parents. The parents had wanted some guarantee that they would see their daughter again and she didn’t want to give them false hope.

Chris promised the parents that they would do everything possible. She also shied away from denying a suspect was involved and so that’s how Ilic’s father realized the Bulgarians were receiving help from the Hungarians. George Ilic broke into a man’s home and he took him, hostage because he thought that was the only way he’d ever find out what happened to his daughter. SWAT was called in to deal with the matter and so Chris was able to talk down George. She told him he wasn’t helping his daughter by doing this. If anything, he might have made it worse because he made it known very publicly that his daughter was a cop.

Luckily, the team knew that the information was going to take a while before filtered in for Varga. They were working with a short window and so SWAT went directly to the Hungarians. They asked about what kind of man Varga is and unfortunately, Varga is the sort that would keep Ilic alive just to sell her down the line. She was probably with the other girls that were transported and so the team used all the information they received. Juliana told them she came in on a crate and the Hungarians mentioned where Varga was going to be doing business.

From there, SWAT was able to find Varga. He was holding himself up in a crate with his guards and several hostages. Varga also chose to use Ilic as a human shield when he saw the police on his security cameras. He escaped with her out of a secret hatch and he was kidnapping her for a second time when the team put an end to it. They killed his guards. Then they hopped on the car he was stealing to get away and eventually Hondo killed Varga as well. With the suspect down, the women were finally safe and they manage to recover an officer.

It’s unfortunate that her father was still going to jail for what he did, but at least Officer Ilic was found alive because sometimes it doesn’t end as happily as that.

Luca, for one, wasn’t there because he’s having hip and back problems and so he was seeing a specialist out of town.

And it got the rest of the team thinking about their own expiration date.