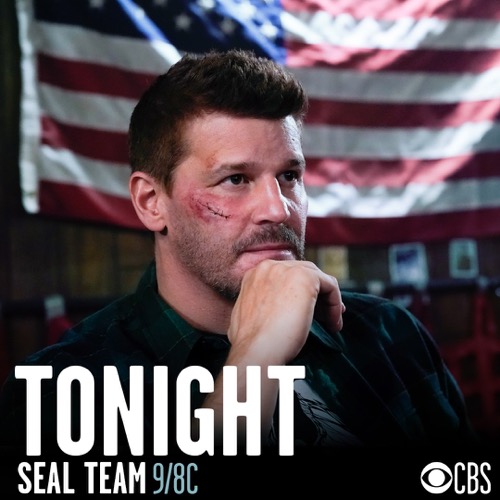 Tonight on CBS their new military drama Seal Team airs with an all-new Wednesday, December 11, 2019, episode and we have your Seal Team recap below. On tonight’s Seal Team season 3 Fall Finale episode 10, “Unbecoming An Officer,” as per the CBS synopsis, “Jason leads Bravo Team on his first mission back following surgery, and Ensign Davis faces disciplinary action.”

Jason’s hip was healed. He was back on his feet and he was also working off hours with Natalie. The two were sorta together. They weren’t officially or anything because it would be too weird for her to meet his friends and so they were secretly seeing each other although she was picking up dinner to take back to their place. Making their relationship sounding more serious than a secret relationship. It was all weird and Jason was happy and so that counts for something. Jason was in a better position than before. He was so happy that when he went out to a bar with his friends he ignored a woman flirting with him.

Jason downplayed it with his friends, but he seems to be committed to Natalie and Mandy at least was suspecting he was seeing someone. She knew that’s why he turned down the flirtatious woman. She also told him that he has to be all in or all out. There couldn’t be a middle ground and so there went that weird space that his relationship in habits. Jason now has to figure out what he wants. He asked Natalie if she felt weird about not going with him and she was fine. She didn’t want to be known as his girlfriend. She built up her career and she didn’t want to jeopardize that by having everyone talk about her dating life.

Personal and professional lives needed to be different. The team all got worried when Davis was called out of a meeting and they were so busy worrying about her that they ignored the part about hunting down a Russian arms dealer. They did remember him, however, when they were shipped out. They were on a long flight when they heard why Davis was in trouble and there wasn’t a single person that believed the cop didn’t deserve to get hit. They said if Davis hit him then he deserved it. They also wanted to back her up at her hearing and so its going to be a crush what with the long flight over and the long flight back.

Clay had also realized that Davis was the woman that Sonny had been dating. He privately questioned Sonny on whether he was fit for service and Sonny swore that his head was in the game. He wasn’t going to let Davis’s situation get in the way. He and Bravo had been sent to collect Yevgenny Kostarov. Kostarov was wanted alive and so the team knew they would met with resistance. They besieged the building and were met with surprise when Kostarov’s men released a grenade. It was by pure chance that bomb hadn’t harmed anyone on the team. It did do damage though to Kostarov’s men and it made their little trip longer than it should have been.

The bomb also caused a fire. The fire was smoking up the building and too made it hard to find Kostarov. The team were also running out of time. They had wanted this mission to be quick because they wanted to be back in time to speak for Davis’s defense and so all these upsets were ruining their plans. They were instead stuck in a building with no way out. They figured they might as well clear the air and so Jason asked Clay about his issues with Sonny. Sonny had felt Clay’s new girlfriend Rebecca was the reason why he was so dissatisfied lately and Clay thought Sonny was being jaded because he hadn’t gotten over Davis.

Clay didn’t reveal the Davis part to Jason. He ended up telling him what Sonny said about Rebecca and how he wasn’t going to let that get in the way of him being with Rebecca. Clay wanted her to be a part of his life. He cared enough about her that he didn’t want to push her to the side and so he got Jason thinking. Later, the boys were able to escape the building. They were on the ride back home when they asked the pilot to speed up. They still wanted to be there for Davis and so it was unfortunate that Ray was warned against it. Ray was told that his review as a Warrant Officer could be put at risk if he defended Davis.

Ray thought about it. He considered what it could do for his career and he ultimately chose his career because of the house. The house that he wanted to buy with his wife. The one they couldn’t afford on his current budget and could only get if he receives that promotion. Ray may have chosen his own family over the Bravo Family, but the rest of the team spoke in Davis’s defense. They were so compelling that they convinced her to fight for her position and she was able to do so to great results. Davis made it out of her review as an officer. She wasn’t demoted and she later bought drinks for her friends.

The only penalty is that her paychecks were going to be docked for a while. Davis was fine with that and she told Ray that it was okay he hadn’t spoken up for her. She understood his position. So, did Jason. Jason tried to get Ray to feel better and nothing worked. Ray is going to remember his decision for a very long time. He was still mopey when Jason had surprised everyone by introducing Natalie as his girlfriend. He wanted to be all in with her and he proved that by introducing her to his friends.