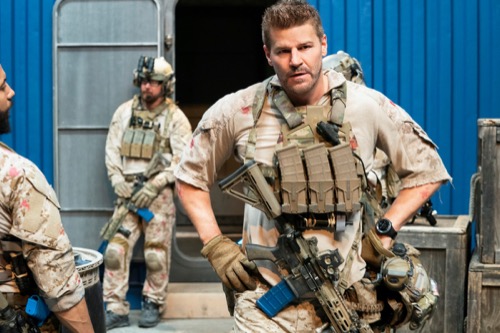 Tonight on CBS their new military drama Seal Team airs with an all-new Wednesday, October 23, 2019, episode and we have your Seal Team recap below. On tonight’s Seal Team season 3 episode 4, “The Strength of the Wolf,” as per the CBS synopsis, “Tensions boil over among Bravo members when they disagree while training for a mission and Jason must select a new candidate to join the team.”

Jason and the guys are playing darts. Sonny is on his phone. They make fun of him for waiting for a call from his misery girl. He tells them he has to head home. Jason and Clay talk about Ray getting his own team. Jason wants to hit another bar but Clay tells him he needs to get home. They have been closing bars all week. Clay leaves. Jason sits back down at the bar.

The next day, the team interview a new crop of candidates. They head to the team room. Ray tries to talk to Jason but he’s worried about making plans for the night with Clay to the next bar.

In the team room, Jason’s superior brings in Natalie, a physiologist. Jason is defensive immediately. She tells them she is there to assess risk factors for the Seal’s that have been on the job for a long time.

Ray meets with a friend to discuss sponsoring him. Meanwhile, Sonny meets up with Davis in the hall. They make plans for tonight. Ray comes out of the nearby officer and gives Sonny the eye while addressing them both by their titles.

Ray finds Jason and tells him he isn’t looking to et his own team. Jason gets upset. Before they can talk further they get alerted for talk of their next mission. Davis updates them on a gang of pirates out at sea with American hostages. One is sick and needs to be brought home for medical help.
Eric and the guys go over what to expect when they get on board the ship. Jason and Ray’s bump heads over strategy. They head to train. Meanwhile, Davis gets a little help from Mandy trying to figure out where the ship of pirates has gone to.

The team did a dry practice run and fail miserably. Jason yells at Sonny to get his head in the game. Ray tries to diffuse the situation. Jason tells them no-one is leaving until they get it right.

Jason is taking a break, drinking beer, popping tramadol with an ice pack on his knee. Natalie comes in and tries to talk to him.

Sonny finds Davis. She wants to know what Ray said to him for Sonny to have to point out that he and Davis are just friends.

The guys get back at training to come up with a strategy for the ship and break their time constraints.

Davis finally finds the ship. Mandy runs into Ray who vents to her about the team and Jason. Eric notifies the guy’s wheels up in an hour.

On the hanger, Sonny tries to calm Jason down and make sure he isn’t alone. Later, before they hit the ground Jason tells the guys he is sorry for pushing them so hard. It might because of what he is going through at home. But he trusts them all with his life.

The team gets into the night water and swims quietly to their target ship. They get on board quietly, shooting enemies on guard. Sonny works to break down a door with a welder when Eric radios that the enemy is upon them. Within seconds several men shoot. The team takes out several men. Eric radios that another ship is making their way in. The guys get to work breaking down doors looking for their hostages.

They find their hostages and reassure them they are there to take them home. Several women cry.

On their way home, Ray and Jason talk over a beer. Ray thinks the candidate Yoder is perfect for the team. Later, Jason brings Yoder to meet the team. Clay is cold and heads home early.

Sonny and Davis talk. She doesn’t like how they need to lie and sneak around. She tells him they can’t be together. They can’t handle this.