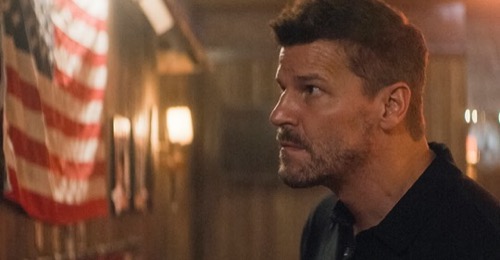 Tonight on CBS their new military drama Seal Team airs with an all-new Wednesday, November 27, 2019, episode and we have your Seal Team recap below. On tonight’s Seal Team season 3 episode 8, “Danger Crossing,” as per the CBS synopsis, “While Jason is sidelined with an injury, Ray takes over as Bravo 1 and leads the team on a mission to rescue a marine pilot who was shot down in enemy territory.”

Jason is at the bar when the physiologist comes in. He tells her he isn’t having surgery. She tries to explain to him that it’s his best bet, it’ll extend his career longer than a year. Which is all he probably has now if he dodges the surgery.

David shows up at the gym where clean sunny or working out. Sunny ignores her while riding the bike.

Clay appears before his superior. He commands him for his work in Yemen and informed him that he has been submitted for a bronze medal. Clay tells him he doesn’t deserve that.

Just as Ray and his wife get comfortable on the couch for a little alone time Jason shows up with a bottle of booze. Jason talks about how he didn’t tell the kids about his hip. He’s afraid to stress them out anymore than they have been. Ray’s wife excuses herself while Jason and Ray talk about how he needs to schedule his surgery. Emma calls and cuts the conversation short which Jason seems to appreciate. She needs him to grab something. He heads to storage. After seeing a few boxes filled with memories he heads to the bar.

Sonny shows up for a drink. He also gets on Jason’s back about avoiding surgery. He talks to me about how the team needs him. Sunny is called into a meeting for a new mission. They are headed to Iran in 30 minutes to save a female soldier.

Jason is woken up by a knock at the door. It’s the physiologist Natalie and she’s ready to drive him to surgery. He tells her he take an Uber. She reminds him that nobody is going to let him be released to a driver on anesthesia.

Jason goes under the knife justice the seals jump into the night on their way to the next mission. After parachuting out of their plane they make it to the ground hiding in the grass as a helicopter goes by. Meanwhile, Jason is out of surgery. Bravo closes in around a group of tents. No one is around but they pick up some interesting code through the walkie that appears to be coming from the soldier they’re going to save. Sonny can’t wait to meet her she fights jets and me and just send morse code.

Natalie brings Jason back to his house and sets a month before leaving him to rest.

Bravo makes their way to the rough terrain to hear gunfire. They quickly take their place behind Campbell who they are supposed to save. She’s a badass and they’re all impressed, especially Sonny. Under heavy gunfire, they try to make it to exfil.

Emma calls Jason to ask about her records he was supposed to get out of storage. He tells her you got them. She tells him she needs them right away. He gets out of bed in pain.

The gunfire gets so heavy that Sonny is left behind. Three radios in and tell Eric and Davis. The rest of the team make it up onto the ridge, looking down the spot sunny before seeing several bombs go off on the ground.

On the ground, the enemy helicopter comes by making the rounds shooting at Campbell and Sonny. Sonny shoots at the helicopter while an enemy on the ground attempts to shoot him but Campbell shoots first Saving his life. He tells her it’s the best first date ever!

At the storage locker, Jason looks for Emma‘s records but ends up in a box looking over things from Alana. He starts to have a panic attack when Natalie calls. She offers to come to get him, listening to he cries on the other line. He accepts his help.

Jason is back at his house after Natalie helps him get home. She’s mad that he didn’t call her. Clay is at dinner with Rebecca. He’s quiet. She wants to know why although she knows he can’t share too much. He tells her how they want to give him a bronze medal and he doesn’t think he deserves it.

Davis shows up at Sonny’s pounding his door down. She is so angry he almost got himself killed. He teases her a little while before she tells him that she still loves him even if they are broken up. She ends up heading inside.

Jason arrives at therapy for the first time when he tells his new psychiatrist that he feels dead inside and needs help.