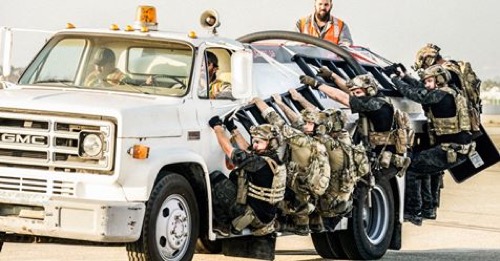 Tonight on CBS their new military drama Seal Team airs with an all-new Wednesday, January 2, 2019, episode and we have your Seal Team recap below. On tonight’s Seal Team season 2 episode 11 Winter Premiere, “Backwards in High Heels” as per the CBS synopsis, “Bravo Team partners with the British Special Air Service to rescue passengers on a hijacked plane who are taken hostage by terrorists.”

An aircraft is taken hostage by several men with guns in the air. Meanwhile, Jason wakes from a horrible nightmare where he finds the kids dead.

The next morning, Jason tells Emma he needs to teach her how to shoot. She doesn’t want to learn.

Stella arrives at Clay’s to get the rest of her things and give him her key back. He heads out to meet up with Sonny and Davis to drink. Davis tries to get him to dance. He refuses and heads to the bar. Sonny and Davis talk about their kiss. Davis tells him it cannot happen again. Clay sees a woman who he thinks is Stella. He follows her and a man out of the bar ready to fight. Davis and Sonny catch up to him in time and stop him. He realizes it isn’t Stella after all.

At base, Blackburn tells Jason and Ray about a hostage situation in Qatar they need to head out for asap. Mandy updates the team that a group of Jihads from an Islamic Brotherhood has landed the plane since. They are holding people hostage in exchange for 50 of their own that are being held, fuel and a clear take-off. The Seals will partner up with other ops from Britain. Blackburn talks to Davis on the side and asks her when she plans to tell the team she is leaving for OCS.

Blackburn warns Jason that he needs to play nice with the other ops. He agrees to even if he doesn’t like it.

When they arrive, Mandy makes it very clear that the British negotiating with the terrorists is not a good move. Meanwhile, Jason is also vocal with the British ops that they are being too lenient. He doesn’t get far. Ray reminds him that there cannot be two QBs calling the shots even of both are great.

The two Seal teams perform a dry run on a plane set up. It goes terribly. Jason pushes back at their plan but the other lead on the ops isn’t listening. Jason walks away. Mandy catches up with him. She laughs a little at him, thinking its such an alpha male he won’t let go. He tells her that isn’t the case. He needs to keep his guys safe.

While practicing their sniper skills, Clay makes some pretty inaccurate shots. Ray talks to him about losing his way and how he needs to trust himself again. Clay agrees and wants to spot their shots instead during the mission.

To buy time, Mandy suggests they ask the Jihads to send love video as proof of life of the hostages. During the video, several people get upset on the plane. Two are killed on the spot and thrown off the plane. Jason thinks talking to lost now, they need to react fast.

Blackburn updates the team that the hijackers plan to kill a hostage every 30 minutes until their demands are met.

The team rides in on the side of the fuel trucks unseen. The British ops are disguised as workers there to fuel. They begin the process as one of the hijackers threatens to kill them with one wrong move. They fuel up and leave by gunpoint. The seals move in after hiding in an upper compartment outside the plane. They have 6 minutes before someone else is scheduled to die. They hook up an explosive to blow the door. Davis sees by a video that there are hostages on the other sides of the exit doors. Blackburn tells the seals to stand down. Jason has an idea. The lead British op hands over the lead. Jason informs the team to get ready. Ray and Clay shoot two hostages through the windshield while the others blow the doors. They get in fast and take out all of the jihads.

Jason scares Emma and teases her after arriving home. They agree to her taking karate. Clay makes a female friend at a bar while Sonny knocks on Davis’ door drunk and wanting to see her. She lets him in. Later, Clay says goodnight to the woman he met after sleeping with her.