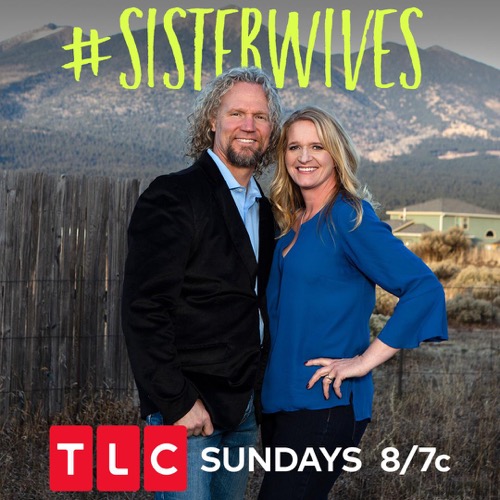 TLC’s reality show about a polygamist family Sister Wives returns tonight with an all-new Sunday, February 17, 2019, season 10 episode 4 called “Kody’s Shocking Move” and we have your weekly Sister Wives recap below. On tonight’s Sister Wives season 10 episode 2 as per the TLC synopsis, “Aspyn goes wedding dress shopping, but Kody drops a huge bombshell after the fun. With a weird whiteboard presentation, he tells his wives they need to sell their houses and move. Meanwhile, Janelle digs in her heels.”

Kody decided to officially bring up his idea. He’s been thinking about moving back to Utah and he’s talked about it with each of his wives individually, but he called a family meeting because he wanted to discuss his idea out in the open. Kody created a presentation and even gave his wives folders so that they could have an understanding of why he wanted to move back. It wasn’t just selfish need. He looked at it financially and it would better for them to move. They had bought all of their houses at a time where they got the land fairly cheap and so they would make a killing if they all sold their houses. The extra cash was a sort of necessity in plural families. Kody said in order to afford college for the younger ones that it would be better if they move.

Kody wanted to move back to Utah. He had been exiled from there when they first came out as polygamists and since they won their lawsuit against the state he thought that maybe they could make their homes there again. Kody also revealed that he wanted to run for office. He admitted that they needed to live in Utah in order to happen, but he claimed he didn’t want to go back there merely for that reason. He said that Utah was their home and that they had hated moving to Las Vegas. Kody didn’t see why they would argue against going back and yet they did. They didn’t want to uproot their lives again. The sister wives have children settled at school and have businesses that didn’t want to give up.

The sister wives understood that Kody was more focused on financial stability more than anything else, but they weren’t going to put money above their kids. Three of them had kids in the final years in high school and they were running for student office. They didn’t deserve to have their lives uprooted because of fear. It was fear of the market dropping that made Kody want to sell now. He felt the bubble was going to pop sooner rather than later and so he wanted to put the houses on the market now. If they did it now then they’ll be able to get the kids in another school before the new school year begins and that would mean their latest triplets would have two full years at another school. Which was important for college.

None of the wives wanted to move nor did they it possible to move within six months, but Kody was adamant. He said his wives chose him to lead the family and that’s what he was doing. Kody wanted to put the houses up for sale now and then slowly integrate the kids into a new school. He also wanted to move and so it had been up to the family as a whole to figure out the where. His wives hadn’t wanted to go because they love the acceptance they received in Las Vegas and so they were only grudgingly considering moving. They knew that Kody was serious about it and they tried to work with him to at least see if they could make things easier for their children. The children were the chief concern and so the family prayed about it.

They prayed for guidance. Kody had said all that he could and so he left his wives to think about moving. There was a part of the sister wives that was a little excited about the idea they could move anywhere, but there was also a part of them that talked about moving because they didn’t want to jeopardize their relationship with Kody by rocking the boat. Christine brought up Kody’s bombshell when she met with her sister wives about their trip. They were taking a ladies trip to find hats for the wedding because Mitch’s mother Hannah makes hats and so the ladies were supposed to be excited about their trip when really all they could talk about was moving. The first three sister wives – Meri, Janelle, and Christine have all moved over ten times because of Kody.

Kody lived in Utah, then Montana, then Wyoming, then Utah, then Wyoming, then back to several places in Utah, and so the first three were exhausted. They moved so many times that Janelle and Meri didn’t think it was possible to move again. They also brought up how it would make them farther than away from families right at the border in Utah and so it was to for moving as well as two against. It all got to be too much and so they ladies benched the conversation for something lighter. Like their trip. They’ve all met Hannah and like her. She had been wearing an amazing hat at the time and she could probably make something even better for them for the wedding. And so the ladies let wedding fever take over.

Aspyn was getting married and she later went dressing shopping. She hadn’t wanted to bring a big party so she brought Maddie, Axel, Christine, Robyn, and her mother-in-law, Hannah. Hannah was going to be making a headpiece for Aspyn for the wedding and so she was there to give an opinion on what would best go with what. The mothers had all wanted to support Aspyn who wanted to be modest in her wedding dress, but then she fell in love with a dress that wasn’t exactly modest. There weren’t any sleeves and it had a low-cut back. It was also very beautiful and so no other dress would do. Aspyn went for the dress that made her feel special and it eventually had everyone crying because the moment had been a little bittersweet. Aspyn was growing up and she was going to be a bride.

Afterward, the sister wives had their trip to Seattle. They told Kody how to take care of all of the kids and he was going to have Mindy there for support with the littlest ones. There were also some tasks around the house that each wanted Kody to do before they came back and so they set everything up at the home front before they left. The sister wives had been looking forward to this trip because they wanted a break and a chance to relax but of course, they ended up talking about “the move”. They’ve each thought about it since the last time and Christine who had been set to move had suddenly decided to stay. She said she prayed and fasted until one day her daughter won the position as student historian and that seemed like a sign to her.

Christine said she would stay behind. She could come out to see the family on the weekend and would otherwise be separated from them for like a year. So this decision was met with firm rejection. Kody shot it down and the sister wives didn’t want to live apart from her. She didn’t want to break her daughter’s heart and them others got, but she was an important member of their family and just hearing them say that had made Christine realize that she should move with the family. Her emotions were all over the place and she didn’t know what she wanted. She was just struggling with trying to make everyone happy and that was possible with this situation. And so the others tried to find a way around moving away too far.

They went back to the idea of St. George, Utah. It was two hours away from they live now and it would mean they didn’t have to uproot everything. Janelle would still be close to her grandchild, Robyn would be nearby to her elderly parents, and Christine would be near all of her children. It would be the best place to move and the only problem with it was the fact it was in Utah. Utah was off the table entirely. It wouldn’t be fair to the children and the whole family could find themselves ostracized. Utah had to be on off the table along with any aspirations Kody might have had that involved Utah. And so the sister wives were of the opinion that they were going to move soon, they just didn’t know where.

Seattle was thrown out there. The ladies had enjoyed visiting the city and getting to know Hannah who grew up in the polygamous lifestyle but didn’t necessarily want it for herself and so Christine had told Hannah that she would make a great sister wife. The sister wives needed to know themselves and how they fit into a family structure. So Hannah has that and would be welcomed in any plural family. And so it was more Hannah didn’t want that for herself.

Hannah was happy being on her own and she lived an impressively cool life that everyone was pretty envious of.