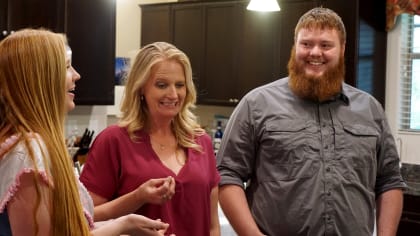 TLC’s reality show about a polygamist family Sister Wives returns tonight with an all-new Sunday, March 10, 2019, season 10 episode 7 called “Divided We Move” and we have your weekly Sister Wives recap below. On tonight’s Sister Wives season 10 episode 7 as per the TLC synopsis, “The Browns look at properties in Flagstaff and they are split over which one to buy; Robyn and Christine prefer one and Meri and Kody another; Janelle is the tiebreaker and her decision is surprising; they make an offer and the response is sobering.”

The adults were genuinely interested in their move to Flagstaff, Arizona. They saw property out there and they fell in love with the small town feel out there. There was just one thing now holding them back and it was their kids. The kids didn’t want to move. They, in fact, hate moving and didn’t see why they had to leave the school or their friends behind, but the family was moving for financial reasons and they wanted to get the kids onboard. The adults in the family thought that it would be easier if they saw the potential properties for themselves and so they were taking the kids on a trip to Flagstaff. The kids would be able to see what schools they were going to go and they could even like their new neighborhood just because it was so different from what they knew.

The adults wanted the kids to see the area and they also wanted Janelle to see it as well. She didn’t take a day trip with Kody to see Flagstaff beforehand and therefore she didn’t get a chance to decide which property she liked best. There were two options in the running. There was Cottonwood that both Meri and Kody loved, but there was also Coyote Pass that both Robyn and Christine loved. Each of the two properties has a special quality to them and so it was going to be hard to choose between them. Cottonwood was surrounded by trees and feels very calming. Coyote Pass, on the other hand, was surrounded by mountainous views and was itself out in the vast open. The second property could handle an expanding family and the first property has to be exact because of trees.

Janelle was asked to choose, but it didn’t really matter to her. She knew real estate and understood that the family needed to money down on the property soon else they risked the chance of missing. So Janelle was thinking more about the bigger picture. She was told that the family had to put their current property on sale by that summer and that the kids needed to be moved into a new school before the school year which also meant they needed to find rentals fast. The rebuilding project was something that might have to be pushed back and with so much to do, Janelle didn’t want to be the deciding vote in a family squabble. The family was split about where in Flagstaff they should move and it didn’t help that the first place they saw – she loved.

Janelle fell in love with Cottonwood. She wanted to write a check from the family fund and put it down before they lost the property, but luckily Janelle came to her senses and realized she needed to slow her roll. She first had to ask about restrictions on the property and there weren’t any. Cottonwood was perfect to Janelle and she thought the kids would agree with her. Janelle was surprised when only half loved Cottonwood and so she waited to see what everyone thought of Coyote Pass. Christine and Robyn still both loved Coyote Pass and some of the more vocal children preferred Coyote Pass. It, unfortunately, restrictions on it and it would be a hassle to get around them – only Janelle really loved Coyote Pass.

Janelle loved the views and so that made three against two. It seemed like Coyote Pass had won that battle and apparently Meri was willing to settle. She felt a deeper connection to the other property, but she was willing to settle for the other one if that’s what the family decided and unbeknownst to her it had irked Kody when she hadn’t gotten behind the second property. Meri was being honest with everyone by saying what she felt and that wasn’t good enough for Kody. Kody wanted her to be excited about the move even if they didn’t choose Cottonwood and instead she was being real. She told the family that she wishes the angels could have sung to everyone at one property and if that wasn’t an option then maybe they could keep looking. And that’s not what Kody wanted.

Meri was willing to suck it up and he still wanted to argue over semantics. He wanted Meri to be excited and not feel like her voice wasn’t heard, but her voice wasn’t heard. Her feelings and even her opinions were being dismissed because for others. Meri wasn’t going to fake being happy about that and she admitted that around the time they were going to be moving that she had to help her only child move to Chicago. Only Kody was all “ she (Mariah) could move”. Kody was being a jerk for no reason and eventually, the other wives chimed in. They told Kody to stop being mean and when he thought about it he realized that he helped his other children move. He had just been so quick to lose his temper with Meri because it was Meri.

Meri was pushing back. She said she loved Las Vegas and that she had made a home for herself there, but she never said she wouldn’t move with the family and her willing to go to Arizona. She just wasn’t going to lie about how she felt. Meri was usually the one everyone else asks how she’s doing and so she’s being open about it. She was going to move with the family to keep the family together and she was also going to help her only child move. There was nothing any of them could have said that would change Meri’s mind about helping Mariah and so the family backed off. Then there was a moment in which everything was fine again and unfortunately, that moment was fleeting?

The adults called a meeting to discuss the financials and Meri had attended the meeting, but she didn’t care about talking money because she’s never been interested and so why would anyone think differently now. They asked Meri for her thoughts and she said literally she didn’t care. She doesn’t! Meri didn’t care about making it work for a move she didn’t want and to a location, she thought second-best. Her family, however, were upset. They said they didn’t want to feel like they were leaving Meri behind and she told them “no” they weren’t. She was still moving with them and so constantly asking her if she was coming was becoming annoying. Meri was going with them and she wanted them to stop asking.

Kody had asked her to stay after the meeting and he told her that he wanted her to be more excited. He asked if there was something holding her back because he thought he had figured it out. Kody reminded Meri that they had had a moment together when they were at Cottonwood and how she had been the first one to see the place with him, but then he tried to make it seem like the only reason Meri didn’t like the other place was because she wanted to be first. Meri wasn’t sure if it was that or if it was just how she felt about this other property. All she did know is that she’s coming with family and so they might as well get on with the move. Meri feeling this way had to be enough for Kody and he had tried to make it work.

Kody finally settled on Coyote Pass. He even had his offer accepted and once it was that’s when he was being unreasonable again. Kody began questioning all that they would have to do and how he was actually farther away from some of his kids. He also realized that he wouldn’t be seeing his grandson all the time and that they had to sell their houses right away. It was like it was just hitting him how difficult it was going to be. Kody got into a funk and his wives didn’t understand what was wrong with him. It had been his idea to move and they had gotten on board. They had tried to tell him in the beginning what it was going be like and he had dismissed by it saying that he was the leader of the family and that it was the best decision for everyone.

And so what happened? The wives didn’t pay much attention to Kody’s grumpiness because they had things to handle for Aspyn’s travel theme bridal shower and so the wives left Kody to gloom in silence. They sure weren’t going to join him now that they’ve signed the papers because what’s the sense?