BY Kristine Francis on July 29, 2019 | Comments: Leave Comments
Related : Recap, So You Think You Can Dance, Television, TV 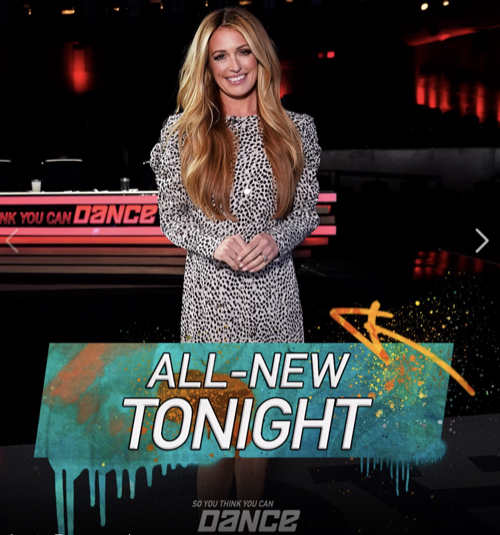 Tonight on FOX their Emmy-Award Winning So You Think You Can Dance airs with an all-new Monday, July 29, 2019, season 16 episode 8 episode and we have your SYTYCD recap below! On tonight’s So You Think You Can Dance season 16 episode 8 as per the FOX synopsis, “After making it through the grueling Academy rounds, the Top Ten women will take the stage, each partnered with an All-Star guy, for a choreographed duet, outside their own style.”

The Academy was the most grueling thing in the competition, but there was still more to come for these contestants as they went through the Final Cut. The Final Cut was when twenty were cut down to ten. First up was the girls. The girls knew only five of them would remain and so they put everything into tonight. The girls would be taken out of their comfort zone. They were going to dance in a genre not their own and they would be dancing with an All-Star. They also had a choreographer. The choreographer and the All-Star were going to assist as much as they could and it was up to the contestants themselves to get it together. The first dancer of the night was Mariah Russell.

Mariah was a Contemporary dancer. She was asked to dance Latin Ballroom tonight and she’s been on notice since the Academy Week when she had a few setbacks. Mariah had to make it up to the judges and so she poured everything into her dance. She performed the tricks, the flips, and she kept up with her partner. Afterward, the judges admitted to being impressed with her routine and they said they’ve seen the fire in her that they haven’t seen since her audition. So that could be good or bad! The next dancer was Melany Mercedes. She was a Salsa dancer and she was being brought out of form with Hip Hop. Hip Hop was all about attitude and she didn’t bring it to the judges. They instead had a few critiques.

The judges felt something was lacking with Melany. They talked about it once they had dismissed her and none of them seemed to believe the dance brought out her best. They said they lost her in the routine and so they were hoping for something better with their other Ballroom dancers. Ashley was given a Contemporary routine tonight and this was what she struggled with during Academy Week. She couldn’t bring the emotion then and she couldn’t do it now. The judges didn’t have any emotional attachment to the dance and, while it was an improvement over what she’s done before, it hadn’t wowed the judges. The judges were looking for the emotion as well as the arm strength because that was needed for Contemporary.

The judges next saw Anna Linstruth. She was a Hip Hop dancer and she had deeply impressed the judges with her audition. The Academy Week, however, was a weak spot. She hadn’t done well in her genre back then and she had only bared hold on. Anna realized that and she wanted to do better tonight. She was given Jazz and this time she threw herself into the music. She gave a hundred percent to the stage and the judges got to enjoy watching her again. They were fans before and this dance tonight sealed her position. Anna won back the judges and many of the others were hoping to do the same. Only Madison Jordan was one of the few that had to top herself. She was a Contemporary dancer and the judges loved her at her audition as well as Academy Week.

Then someone gave Madison the Cha Cha. Madison again raised the bar and was a hit with Latin Ballroom. She also wasn’t dancing on a broken heart. The last time she dances had been right after her boyfriend was cut and so she was finally able to bring the levity back in her personality. Also, the judges had enjoyed seeing that spark again. They loved Madison and she was practically a done deal for the Final Five Girls. There was also still more to come. Sofia Ghavami had gone next. She was a Latin Ballroom dancer and this time she was asked to dance Jazz. Sofia was given a tough jazz routine and yet she executed the steps perfectly on stage. There just wasn’t that much emotion with her and so one of the judges felt it lacking a bit.

Sumi Oshima received the same criticism. She was a Hip Hop dancer and she performed in Contemporary for the judges, but they said she only got the steps right and not the emotion. It was all about the character the dancers brought to the stage. Their routines could work if only they committed themselves and there was no better example of this than Nazz Sldryan. She was a Ballroom dancer and tonight she was asked to dance Hip Hop. It wasn’t even remotely like her usual and somehow she pulled out a Hip Hop dancer. She threw herself into the dance. So from the start, she had the judges attention and they were on cheering her on during the dance. They loved Nazz and she was proof positive that the other dancers could change up their genres.

Sophie Pitman had gone next. She was a Contemporary dancer and she was asked tonight to perform the Cha-Cha. Sophie struggled during practice to get the steps right. She second-guessed herself then and she continued to do onstage. The judges could see when she stumbled in heels. They also said she never committed to engaging the audience. She left her doubts to affect the dance. There was never a moment she was truly comfortable in her character and so the judges weren’t impressed. They weren’t even sure if they still wanted her around. And so it was onto the last dancer, Stephanie Sosa was a Ballroom dancer and yet she was asked to dance Contemporary.

It wasn’t so bad! It was just a little too low energy and so the judges had to consider that with the rest of her work. After Stephanie, the judges discussed and debated the merits of everyone. They eventually decided on Mariah, Stephanie, Anna, Sophie, and Madison.

The judges took everything into account. They took in Academy Week, the Solo performances, and their performances tonight. So they were looking for consistency rather than a one-off…so good luck to the boys!