BY Kristine Francis on August 5, 2019 | Comments: Leave Comments
Related : Reality TV, Recap, So You Think You Can Dance, Television, TV 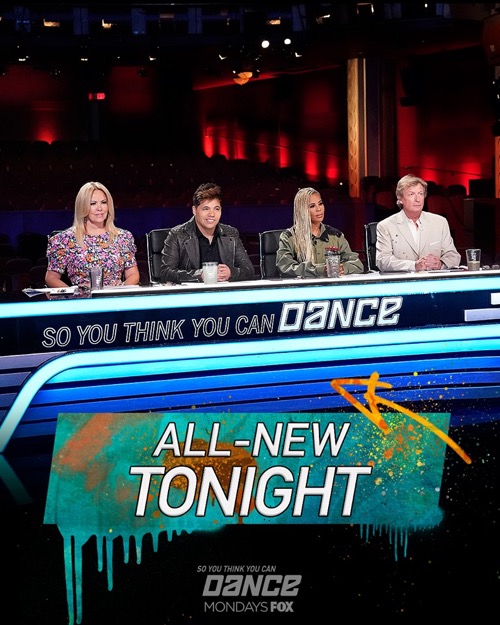 Tonight on FOX their Emmy-Award Winning So You Think You Can Dance airs with an all-new Monday, August 5, 2019, season 16 episode 9 episode and we have your SYTYCD recap below! On tonight’s So You Think You Can Dance season 16 episode 9 as per the FOX synopsis, “The Top Ten men will take the stage, each partnered with an All-Star girl, for a choreographed duet, outside their own style.”

The Final Cut continues with the guys. The guys had needed trimming after the ladies went last week and so tonight the judges got to see the guys dance for their lives! Each guy would be judged on his final performance in this round. They would each be paired with an All-Star and they would even receive feedback from their own personal choreographer. The guys also have to dance in a different genre than their own. Bailey Munoz for example was a BBoy and he didn’t know a thing about the genres until he went through Academy Week. Academy Week was what helped him see that there was more for him out there, but Bailey was the one that had to look within himself to pull out a Contemporary number.

Bailey went on to do everything he needed to do in practice. Jaci Royal also helped him become a great Contemporary dancer and so he and his partner had later looked beautiful onstage. They had both did the Contemporary style great justice even to point where the judges had been pleased. It takes a lot to impress them, but they thought that Bailey was incredibly talented. He raised the bar on what he could do and he left the judges wanting more. So following the guy had been really difficult on Ezra Sosa. He was already living in his sister’s shadow and it took some time to be recognized on his own. Thankfully, Ezra was only getting better with time and his Hip Hop number had looked great coming from a Latin Ballroom guy.

Not all ballroom guys could take on the intricacy found in the other genres. Vlad Kvartin was a great ballroom dancer and it wasn’t great when he tried on Contemporary. His movements were a little abrupt and this wasn’t the time for mistakes. The judges might forgive it because of his previous work, but they also might hold his mistakes tonight against him. Vlad knew this when he left the stage and realized it could be his last night. Later, Aleksandr Ostanin had his turn. He was a tap dancer and tonight he transformed into a Latin Ballroom dancer. He had fun on the stage and the judges could see how much he approved. It just hadn’t been enough for them. They said his footwork wasn’t right and there was also a problem with his hands because he hadn’t staged them properly.

The judges were a fickle bunch. They wanted only the best for their final five, but they couldn’t stop themselves from picking certain dances apart and so the guys had to dig deep for their performances. Benjamin Castro had gone next and he was a Contemporary dancer that was asked to try on Latin Ballroom. He had been flat-footed in some areas of the dance and in other times he had been a great dancer. Like he had done several flips and lifts and that should have been enough for the judges and yet they were still looking for more. They were let down with Benjamin and they also let down with Clocks. Clock was an amazing Hip Hop dancer and so his take on Jazz hadn’t been all that great.

Clocks couldn’t get the lifts right and, for that, he was skewered. The judges didn’t hold back when they told him that they couldn’t get over his poor lifts and so he walked a way believing he would be cut when there was still a chance for him. There was a chance for all of them. The judges took everything they’ve ever seen into account and they tend to fight for their favorites. Which really isn’t new. They have favorites and they cut people that weren’t included in that small number. Brandon Talbott knew this going in and the Ballet dancer still couldn’t pull off Latin Ballroom. His footwork was placed as if he was dancing in ballet and he failed to achieve chemistry with his partner.

Then there was Nathan Cherry. He was a Hip Hop dancer and tonight he tried on Contemporary. Contemporary demands everything from the dancer, but it took Nathan a while to dig that deep and it had been great once he did. Nathan pulled off an amazing performance. He showed that he accomplished another genre and that should have meant he was a shoe-in. But a couple of the judges admitted that they hadn’t been paying attention to him. They said he didn’t hold the attention before and that he was only doing so now and that could mean anything, so moving on the next performer had been Gino Cosculluela. He was a Contemporary dancer and tonight he performed in Jazz. It had looked great to the untrained eye. And not thqt surprisingly, the judges thought differently.

They said they needed to see the same energy as before. He was a great technical dancer because he makes sure he has each step memorized, but it was lacking emotion and so the judges took points off for that. Then there was Eddie Hoyt. Eddie was a Tapper and he shocked everyone when he had the greatest performance of his life as a Hip Hop dancer. It literally was his best performance and it was slightly heartbreaking that it took this long to get Eddie to let go.

And the guys will be joining the girls for the live shows as the Top Ten!