BY Jessica Jones on September 17, 2019 | Comments: Leave Comments
Related : Reality TV, Recap, So You Think You Can Dance, Television, TV 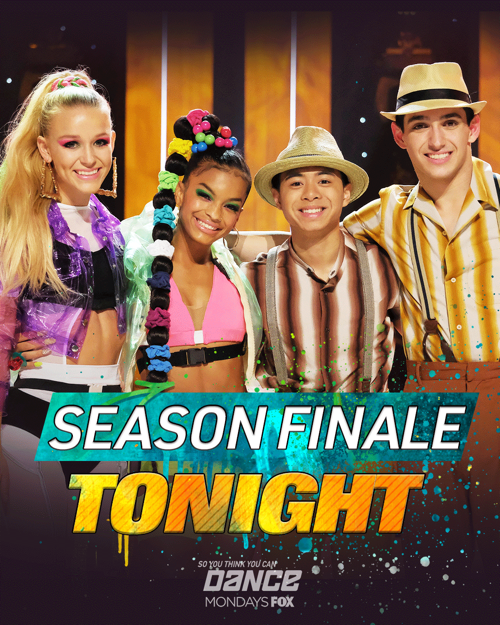 Tonight on FOX their Emmy-Award Winning So You Think You Can Dance airs with an all-new Monday, September 16, 2019, season 16 episode 15 episode and we have your SYTYCD recap below! On tonight’s So You Think You Can Dance season 16 episode 15 finale, “After incredible auditions in New York and Los Angeles, grueling call-back rounds at The Academy and weeks of inspired studio performances, the nation will finally decide who joins the ranks of America’s Favorite Dancers.

One last time, the final four dancers show the judges and the country what they’ve got before the winner is crowned.”

On tonight’s live season finale of So You think you can dance all ten dancers reunite for one last group performance. They are filled with energy and very animated and the audience amps them up. Mariah, Bailey, Madison, and Ezra are in the top four, the grand prize tonight is A quarter-million dollars, and a cover of “Dance” magazine.

The judge picks their favorite summer dances for the top four to perform. Up first Mariah and Baileys routine is a sporty motorcycle hip hop routine, it’s very fast-paced with both dancers energetic and moving in sync. Madison and Ezra perform a sultry striptease piece it’s fun flirty between the two watching them fully in character and the audience loves it, it even brings the judge Dom to tears which they show that if he cries after a dance, that means he loves the performance.

The show looks back to Mariah’s first audition and looks back at some of her favorite routines. She performs Slide with Bailey and their prop is a roof of a house, it’s really a touching routine and they use the stage prop throughout the dance and slide off it a lot and they display the theme perfectly. Stephanie and Gino perform a fav dance picked by judge Mary Murphy and it’s a firey retro jazz jukebox theme. The ten dancers do a group dance-themed Enough.

Anna and Benjamin perform a fav piece picked by judge Dom, it’s soft flirty Broadway theme. Judge Mary picks another fav with Gino and all-star comfort performing their ancient Egypt hip hop dance “Rise” it’s upbeat and on point.N ext is Nigel’s fav pick from dancer Phobe Kochis who has Down Syndrome, he states that nothing should stop you from pursuing your dream regardless of any impairment.

The top ten perform a funky electric piece that’s full of vibrant costume colors and they move in unison to a hip hop beat. Judge Dom picks his fav from Madison, Mariah, and Sophie they perform in black catsuit attire the three women move powerfully across the stage and each dominantly deliver their steps.

Next Mary chooses a restaurant mambo themed piece from Bailey and all-star Koine, it’s fun playful and entertaining watching the pair in character playfully interact. judge Laurie Ann chooses her fav by Bailey, Gino and Ezra the men move in unison in their button-up white shirts and ties it’s a moving religious piece dancing to a song called “Amen”.

Bailey picks his “Need you tonight” dance performance, him in Madison are matching in leather costumes it’s an electric filled piece and u can see and feel the chemistry between the two. Next, the dancers tell us what they would do with the money if they win some say they would buy a car, pay off bills or buy a home the results are in and one dancer is eliminated and that’s Sophie, leaving Gino, Bailey, and Madison. Gino and Bailey perform together with a smooth jazz dance which is more on the soft side for the two men and not a strong masculine performance.

Laurie Ann picks the final fav piece from Ezra and all-star Gaby, it’s a French-themed Les Miserables dance it’s dramatic and intense, each step delivered with passion and intensity both dancers definitely in character and believable. Next results are revealed and Gino is eliminated leaving Mariah and Bailey.

The winner is announced and Bailey is the grand prize winner.