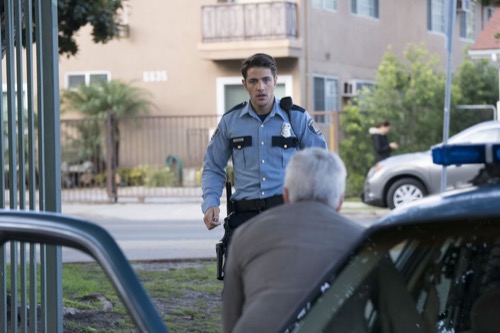 Tonight on ABC Station 19 returns with an all new Thursday, March 14, 2019, season 2 episode 9 called, “I Fought the Law,” and we have your Station 19 recap below.  On tonight’s Station 19 recap as per the ABC synopsis, “When Andy, Maya, and Dean respond to a call, they find an injured woman with amnesia; but soon into the treatment process, they realize there is much more to her story. Meanwhile, Captain Sullivan takes Ben and Jack on a house call that quickly becomes a close call for the patient they’re treating, while Ryan may not have seen the last of his father, Greg.”

Tonight’s Station 19 season 2 episode 9 looks like it is going to be great and you won’t want to miss it.   While you’re waiting for our recap make sure to check out all our TV recaps, news, spoilers & more, right here!

A reporter from the Mayor’s office came to interview Andy. She was nervous in the beginning and she said a few things that in hindsight she thought sounded a little too silly. Only other than that she came out of it unscathed. Andy was even laughing about it afterward with Maya. Maya had suggested that maybe she lost her “fire-gasms” which were what firefighters get every time they save someone and realize that their job had a deeper meaning, but her friend was doing her best to reassure her that she was going to get her game back. It was going to take some time and its okay it doesn’t happen right away. Maya dreaded it one day happening to her and nevermind what was happening with Jack.

Jack just came back from leave. He said he was fine and that he was feeling better, but everyone was nervous around him and it didn’t help that Pruitt continued to send people over to check him. Jack was an adult. He didn’t want people babysitting him and so he kept pushing them away. It worked until Vic came to talk. She actually came over because she wanted to talk and not because she was using a ploy. Vic brought up her “Mr. Hypothetical” to Jack. Jack already knew that she was seeing someone dubbed “Mr. Hypothetical” who she didn’t think it was serious to tell anyone else about and at the same time she needed advice with this guy because she was afraid “Mr. Hypothetical” might have done something that made it seem like they were serious.

Vic said the guy she was sleeping with had mentioned her to his sister. The guy (Ripley) said he tells his sister everything and so Vic just wanted to know if that meant anything. Like maybe her hypothetical booty-call thought they have a relationship and she was the last to know! Vic asked Jack and Jack had no good answer for her. Vic was the only one that could say if her booty-call was moving too far or not fast enough and so she didn’t get the help she thought she would from Jack. He was too busy being surly to everyone. Jack needed help with his PTSD and it was great that he finally got that help, but the fact his squad had to force into has made him lash out people who were really his friends.

Dean had tried to explain himself. He said that they tried to get Jack to realize there was a problem and that he didn’t want to hear it. Which was true! Jack kept brushing off what his friends had to say and that’s why they brought in the bosses. It wouldn’t have helped if Jack had an episode while they were responding to an accident, but Jack still doesn’t believe he was in the wrong and so Dean left him behind as he responded to an emergency with Maya and Andy. The three took an ambulance to a young woman that was claiming amnesia. The woman said she couldn’t remember her name and she didn’t seem to remember the people in her photographs. She also didn’t have identification and so the ambulance dropped her off at Gray Sloan as a Jane Doe.

The trio responded to a few more calls and by the time they came back to the hospital they saw Jane Doe lurking outside by the cars. She again said she didn’t know where she was and she refused to go back to the hospital. It turns out she ran away not long after the EMTs left and so Andy thought to keep her occupied outside while they wait to get a doctor to come to see their patient, but Dean believes he found out why Jane Doe didn’t want to stay at the hospital. She apparently was a fugitive. Margaret Chen missed her case and she has wanted a criminal now. She had caused injury to herself and was trying to get Andy to take her a different hospital because her son was having surgery and she didn’t want to miss it.

Margaret never had amnesia and she was basically asked the firefighters to bend the rules for her yet again because she wanted to see her son before she went away for embezzlement. She had only embezzled from her company because her son’s surgery wasn’t covered by her insurance and once she saw the opportunity to run she did, but Margaret still wanted the chance to see her son and so she asked it of Andy. Andy called Ryan and she got Ryan to bend the rules. Ryan agreed to “escort” Margaret to her son’s hospital room and he granted her the chance to say goodbye to her son. Margaret was arrested once he had been wheeled away and Ryan got to take credit for the arrest. Though he didn’t do it all just because of Andy. He thought that Margaret’s situation was similar to his father’s.

Greg Tanner had stayed on in Seattle for months after he was supposed and he did it because he wanted to give Ryan the keys to a locker. Greg wasn’t that much of a father, but he wanted his son to have something of his and they also got to properly say goodbye. Ryan cherished what little he had with his dad and he wasn’t going to deprive another child of that. He gave Margaret’s son Ben closure and it didn’t result in anyone from Station 19 getting arrested as well. Maya was afraid of the risks and so she just as happy as anyone that she didn’t get thrown in jail. She had also been in for a surprise because later on, she found out that Sullivan changed his mind about transferring her. She a part of the station and Captain Sullivan didn’t want to lose her or Jack or even Pruitt.

Pruitt had warned Sullivan that he should never take the team for granted. They were there to carry out a duty and it wasn’t always going to be about the details that Sullivan was previously stuck on. He had to care about the people at the station and he had to care about the people under their protection. Sullivan carried out his first wellness check and it saved Oscar Delgado’s life. It also made him realize that maybe he should listen to Pruitt who knows what he’s talking about. And so Sullivan treated Pruitt to a Pole Day where everyone got to slide down the police.

Ryan in the meantime found out his father had left him thousands of dollars.

And Vic did end up telling her best friend about Ripley, but it wasn’t what Ripley was talking about when he said it was okay for her to tell others