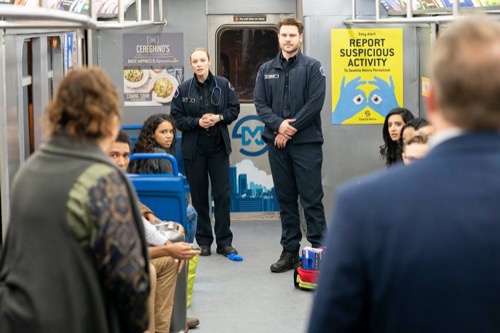 Tonight on ABC Station 19 returns with an all new Thursday, March 21, 2019, season 2 episode 10 called, “Crazy Train,” and we have your Station 19 recap below.  On tonight’s Station 19 recap as per the ABC synopsis, “Jack and Maya are called to treat people stuck in a subway train and discover a potential threat to the passengers and themselves.

Meanwhile, Travis, Ben and Dean get pressured into inviting Sullivan to help repaint walls in Travis’ house and come to a surprising conclusion about Sullivan.”

Jack and Dean were still fighting. Dean went behind his best friend’s back to get help for him and he knew that his friend would resent the interference, but he never thought the resentment would go this far. Jack went and invited Dean’s family to dinner. This was the same family that said they wanted nothing to do with Dean because he didn’t want to go into the family business and he knows now that nothing has changed. They were going to still try and control his life. Dean got away from them to be his own person and he had told Jack all of this from before. He didn’t know how Jack getting involved with them was supposed to make Jack feel better and so he called like it was. This was Jack’s way of getting revenge because he still didn’t see why Dean had reasons to go to command about him.

The two of them got into an argument about it at the station and Maya had seen it. She’s been paying closer attention to Jack since he came back and she said she still doesn’t think he’s been sleeping, Jack was antsy and easily agitated. It seems like he still had a problem and so Maya went to Andy for her advice. She wanted to know what she should do and she was told to stand down. Andy said that Jack felt ready and that his psychiatrist had cleared him. He wouldn’t have come back to work if it wasn’t the right time for him and so Maya backed down. She thought maybe she had been wrong and was just hoping they wouldn’t get another emergency anytime soon because she was paired with Jack for the next call.

Only saying that out loud jinxed her. Maya got a call and responded to a situation on the train. She and Jack found out that someone passed out on the train and so they went to make sure the young man was alright, but unfortunately, they found a fever when they tested him and he wasn’t the only one that was ill. There had been another man on the train with a fever and so Maya thought it could have been cold until her teenager began coughing blood. He coughed blood all over the face masks and contaminated them. So she and Jack didn’t have any to hand out and it turns out they needed them. They had reported the teenager’s symptoms as well as the fact he had just come back from vacation to the Middle East and its believed that the teenager had a severe case of bird flu. And this could pass through the air.

Meaning the whole train cart was contaminated. The teenager was the worst one off and no help or extra aid was coming until the CDC arrived. It was Maya and Jack’s job to announce what they learned to the everybody on the train and once they did they risked a mutiny. People who didn’t go near the teenager had wanted to go home and they were crowding Jack who was blocking the door, but before Jack could freak out, Maya made another announcement. She said if people wanted to leave that was on them and if they did they should know that they could carry the virus back to family and friends. They would be putting their loved ones at risk and they would have no one to blame but themselves. And so Maya got through to the mob with a little common sense.

It just grated on Jack that she did. He’s noticed that Maya double-checks his patients after he finishes with them and that she took over when the mob was proving unruly. So he confronted Maya because he wanted to know why she was second-guessing him in the field. She didn’t mean to talk to him under such circumstances, but she admitted that she wasn’t sure that he was ready to be back in the field and that she thinks he was only cleared because he convinced everyone he was fine when he wasn’t. Maya knew what it was like to be benched. She was itching to get back to work and so she made everyone believe she was okay. She even convinced herself of it until one day it all came crashing down around and she didn’t want that for Jack.

Jack couldn’t fault her for what she was saying because it was coming from experience and so they were at an impasse. They didn’t know what to say to each other and was struggling to find the words when someone else passed out on the train. That was when they had to work together to save a patient’s life and so they put all of their arguments and pettiness to the side. They kept one guy breathing and then had to work on the teenager who struggling as well. It was while they working on Will that someone on the train tried to escape, but was zapped by a stun gun. The guy carrying the stun gun was a security guard and he used it to stop the spread of the virus. But the guy that got zapped began seizing and so the two firefighters had more patients than they knew what to do with. And unfortunately, they were short on supplies.

With so many people in need, Jack’s PTSD started to act up and he almost lost it. He had a second there where it could have gone either way and then just like that he was fine again. Jack began asking for volunteers from amongst the other passengers and together they kept everyone alive until the CDC finally came. The CDC had a vaccine and had practically brought along a walking hospital. They were perfect for this crisis and they allowed the two firefighters to finally have time to rest. Jack and Maya talked afterward and they both sort of apologized to each other. It seems they were both partially right about his situation and so they were quick to forgive the other. And while they never met up with the others for drinks, Andy came to them to check on them.

Andy heard Maya in the shower so she talked to her from outside the door, but if she had ever gone in then she would have seen Maya was in the shower with Jack.