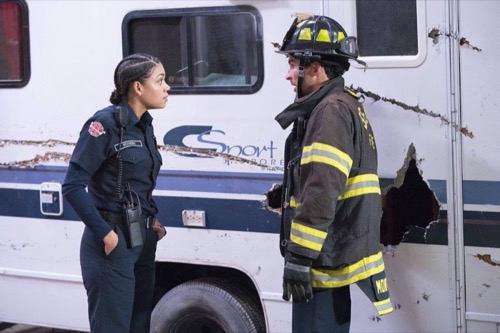 Tonight on ABC Station 19 returns with an all new Thursday, March 28, 2019, season 2 episode 11 called, “Baby Boom,” and we have your Station 19 recap below.  On tonight’s Station 19 recap as per the ABC synopsis, “When an RV crashes into Station 19, the team races against the clock to save lives and secure the building’s compromised structure. Meanwhile, a surprise delivery arrives at the reception.”

Someone abandoned a baby at the station. Vic and Montgomery found the baby when they were talking and noticed that a duffle bag was moving all on its own. Both of them had thought it would be a dog and so finding a baby had come as a surprise, but it wasn’t a mistake. There was a note left with the baby boy that asks them to take care of him. He was abandoned by parents that probably thought they could handle raising a child until it turns out they couldn’t and so they made the responsible for leaving him where he could be found as well as taken care of. The firehouse was considered a safe house for abandoned children and they knew what to do under the circumstances. They had to inform DCFS about the child and wait for someone to come pick him up. And they would have done just that if an RV hadn’t crashed into their station.

The driver was a teenage girl. She quickly apologized for what she did only it was an emergency. Ellie said that her mother started shaking and she wouldn’t stop. Ellie’s mother was experiencing an ongoing seizure and she needed treatment, but Andy also had to check on Ellie and the rest of the firefighters had to see about removing the RV. The crash compromised the building and the whole place needed to be secured. There was a team focused on that and the others tried to get an IV into the mother, Paula. She was shaking so much that it was hard to insert a syringe or get a proper read on her and so it had taken Ben’s precise hands to get the job done. He gave her something to stop the seizures and everyone thought she was going to be okay until the ambulance gets there. Only she began seizing as they were picking her up.

Paula didn’t regain consciousness in all that time. She more or was less was mumbling her daughter’s name when she began to seize again. It scared Ellie to see her mother like that and she worried Andy when she started to call herself a jinx. Ellie was a road trip with her mother and they drive from Connecticut, but this road trip was supposed to take their mind off the divorce and there have been problems the whole way. Ellie said she must have ruined the trip somehow and she blames herself for her mother ended up as she did. She told Andy that if she hadn’t been around then everything would be fine and so Andy tried to get her something to comfort her. And when she tried to get back into the room, Ellie locked her out and she didn’t want to go with them to the hospital because she might ruin that as well.

Except Ellie was diabetic. She was operating on adrenaline to get her mother to some help but she was always going to crash and she did so in a locked room. Andy had to break into the room to get to her and with some assistance from Vic, they settled Ellie’s low blood sugar. She woke up just fine and they suggested that they take her to the hospital to go be with her mother only she turned them down. She still blames herself and she wasn’t the only child at the station that needed them. There was also the baby. The baby needed a diaper change and Ben got roped into doing it. Then baby needed a new diaper and so Ben went looking for one while at the same passing the baby onto Captain Sullivan.

Sullivan always wanted kids. He regretted not having them with his wife when they could and it had been Ben who reassured him that the door was never closed. Sullivan could still meet someone and have a family, but for now, he was enjoying being around Baby John Doe and he was showing him off to Andy when the explosion occurred. The RV had an extra propane cannister under it and it was ignited by a broken phone of all things. The explosion ripped through downstairs and shattered all the windows upstairs. Thankfully, Sullivan and Andy were able to protect the kids and so no one was injured. There was still the problem of convincing Ellie to go and it seems the reason she didn’t want to because she was scared. She was scared it would be just her and her mom when another seizure happens. And, well, she didn’t need to worry about that because she already knew what to do.

Ellie got help for her mother last time and if needed she could do it again. She just needed to be reminded of that and once it sunk it she was ready to go to the hospital. Ellie went to join her mom and her encounter with Andy made Andy think about her own childhood. She has been throwing a tantrum about her father selling the house because she thought needed it to have the memories and she doesn’t. Not, really. She will always have her memories and the people she shares them with. Andy learned her lesson and in his own ways so did Sullivan. Sullivan gave Ben his approval for Ben to go after the emergency medic job because he knew that Ben has to do what’s best for his family. And so they were all moving on.

The firehouse was saved from destruction and while it tested Vic’s relationship with Chief Ripley, if he couldn’t handle have their relationship out in the open then it wasn’t much of a relationship.Andy may have also realized that she loves Ryan, but he was dating other people and so maybe she should have been quicker on her feet

And Dean missed all the fun because he had dinner with his family and Jack and it surprisingly it didn’t end in bloodshed.