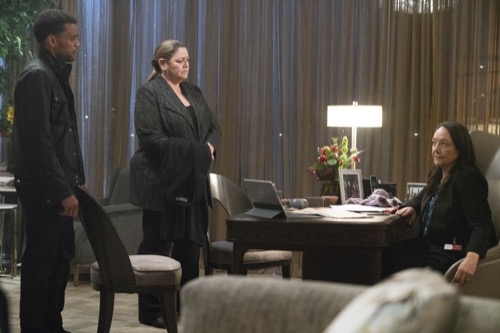 Tonight on ABC their drama Stumptown based on the graphic novel airs with an all-new Wednesday, September 25, 2019, season 1 episode 1 premiere called, “Forget It Dex, It’s Stumptown,” and we have your Stumptown recap below. On tonight’s Stumptown season 1 episode 1 as per the ABC synopsis, “The series premiere. Dex Parios is a strong, assertive and sharp-witted Army veteran with a complicated love life, gambling debt and a brother to take care of.

With only herself to rely on, she solves other people’s messes with a blind eye toward her own, finding herself at odds with the police and in the firing line of criminals.”

Tonight on Stumptown we’re introduced to Dex who’s kidnapped and held in the trunk of a car by two kidnappers and she makes a daring escape, almost causing the driver to crash with all three inside. Three days earlier we meet Dex, she’s in a bar striking up conversation with a stranger who she quickly reads as trying to have a one night stand and she leaves him at the bar and heads to the craps table where she’s pulled away by the owner Sue, who’s son Dex used to date and confronts Dex about her gambling problem then asks Dex to help find her sons daughter Nina, in which she declines at first but reconsiders since she needs the money, Dex also takes the job since she cares for her special needs brother Ansel.

Dex makes her first stop to Nina’s friend to find some leads, turns out Nina is planning to run off to elope she tracks her down and gets her to bring her back home but then her car catches a flat and it turns out to be a trap to kidnap Nina back from Dex by two men who quickly ram her car from the back, she and the two kidnappers struggle in the street but they take off with Nina, leaving Dex defeated. Local police get involved and Dex is arrested by Det. Hoffman for having outstanding parking tickets, which they only do to get more information out of her on Nina’s kidnapping.

Dexs friend Grey bails her out. Dex heads back to the hotel where Nina was to talk to her boyfriend Michael turns out her grandmother Sue Lynn had some bad dealing with an ex-business partner Baxter and they hold Nina for a 2 million ransom and now the local police get involved back at the casino. Dex asks an old friend Tookie for help on finding Baxter and he gives her a location. Dex goes out to follow her lead on Baxter down at the club. Baxter thinks Dex has the 2 million ransom she doesn’t and makes an escape and gets a call from Det Hoffman that Nina has been returned to her family and it leaves Dex baffled.

Back at the casino, Sue confirms Ninas return back home which Dex doesn’t believe. Dex heads to Det. Hoffman’s and they have a make-out session, and they share information on Nina kidnappers and it doesn’t sit right how she is kidnapped then suddenly returned. Dex heads back to the hotel only to find out Nima is still missing and it’s Nina’s boyfriend Michael who is the one behind the kidnapping and the two kidnappers are working with him to get the two million ransom.

The kidnappers abduct Dex. She escapes from the trunk and holds them at gunpoint to get Nina’s location. Meanwhile, Nina is let go by Michael to her grandmother for the two million and just as he’s about to run off Dex stops him and police arrive and only then is Nina finally reunited with her family safely for real this time. Back at the bar Dex thanks Grey for being a good friend and looking after her brother Ansel. Det. Hoffman offers Dex another job and it’s up in the air, as she contemplates on whether she’ll take it or not.