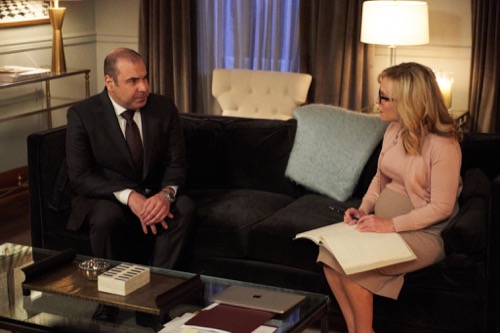 Tonight on the USA Network their critically acclaimed drama, Suits returns with an all-new Wednesday, July 31, 2019, episode and we have your Suits recap below. On tonight’s Suits season, 9 episode 3, “Windmills”, as per the USA Network synopsis, “Harvey takes a case to send Faye a message; Louis finds a new opportunity.”

Sheila tries to calm Louis after Faye has demoted him. He doesn’t know how long he can go to work and not be in charge.

At the office, Donna tells Harvey he should never just take her side because they are together. They make a plan to go out to dinner once a week and not talk about work. Donna is impressed. Harvey got the idea from Oprah. They both get word Louis has been stripped of his title as managing partner. Harvey heads to see Faye. He is angry, telling her he isn’t going to answer her even if Louis is no longer the manager.

Donna goes to see Louis. He is upset in his office. She tells him that what happened with Harvey and her is over. He will never side with her again just because they are together.

Alex and Sam talk about Faye. She wants to get rid of her. Alex doesn’t want to do anything dirty. She tells him it will be on the up and up.

Harvey goes to meet Dan, a CEO who is losing control of his company. They talk. He hires Harvey to sue on his behalf as s shareholder. Meanwhile, Louis meets with an old friend Saul who offers him a judgeship over lunch. Louis is insulted. He may be down now but things will get better. Saul tells him to take the offer because if he has to fight Faye it’s not looking good.

Harvey tells Faye about his new case. It seems she was once connected to Dan. She warns him not to take it but he doesn’t care.

Louis tells Sheila about Saul’s offer. Sheila confesses that she went to him. He tells her he will think about it.

Alex and Samantha got through law books to find a way to get rid of Faye. She thinks they need to get Gavin Andrews to leave. Alex refuses. He isn’t doing that.

Katrina and Susan, who hopes to be Katrina’s new associate, work on a new case together. Susan has some connections that can help with the case. Katrina isn’t impressed and doesn’t want to go that route.

Louis sleeps, dreaming of being the star lawyer and judge, who puts Faye away. The next day, he tells his shrink about the dream. He has a lot to think about when he realizes that there will be no more Harvey and Donna if he takes the judgeship.

Faye comes to Donna. She needs a secretary and knows Donna was once the best. She could demote if Donna refuses. Donna agrees to do it.

Alex tells Sam that work has been tough. She needs to focus on something else, family. He invites her over tonight for dinner with his family.

Dan calls Harvey. He has been fired for Harvey’s aggressive tactics. He threatens to sue Harvey.

Donna tells Harvey about Faye asking her to be a secretary. He is ready to rip into Faye. Donna talks him. They need to ignore her and head out to dinner.

Katerina gets mad at Susan for calling her family friend. Katerina tells her she off the case. Susan gains leverage by threatening to tell Faye all about why Brian left. Meanwhile, Gretchen sends Donna to dinner. She can handle Faye. Louis comes looking for Gretchen and blows up when he realizes Faye is suing her.

At dinner, Harvey and Donna end up talking work but make a deal to stop. Silence. They don’t know what to talk about. They end up sharing stories from your childhood and things they don’t know about one another. Meanwhile, things get heated at Alex’s after he discovers his daughter got into a car accident with his car.

Louis tries to reach Donna and Harvey as he arrives at the restaurant they are at. They don’t answer. He sees this and leaves upset.

Katerina gets advice from Sam about Susan. Meanwhile, Harvey approaches Faye about Dan’s case, accusing her of getting him fired. She doesn’t back down and would take the stand if she had to.

Katerina brings Susan to see Faye and tells Faye Susan made a mistake but she corrected it. Susan is left speechless and nervous. She doesn’t share what she thinks she knows about Brian.

Louis tracks down Harvey. He tells him he is leaving. He is going to be a judge now that hell is raining down on him and he and Donna are ignoring him. Harvey tells him he is fighting for him and will always, as well as Donna.

Sam shares with Alex she is going to look for her biology parents after their dinner the night before. Donna visits Sheila and Louis at home. She doesn’t want him to leave. They decide to have a girls night.

Harvey and Faye get into it. He tries to get Gretchen back for Louis but she isn’t backing down.