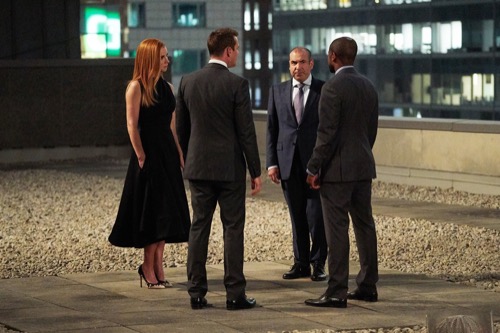 Tonight on the USA Network their critically acclaimed drama, Suits returns with an all-new Wednesday, August 21, 2019, episode and we have your Suits recap below. On tonight’s Suits season, 9 episode 6, “Whatever It Takes”, as per the USA Network synopsis, “Harvey makes a play to get Samantha’s job back. Katrina faces off against an old friend.”

Faye calls Donna at home to tell her she fired Samantha. She is calling to warn her because she knows the firm will react badly and Donna needs to stop them.

Samantha shows up at Robert’s house to tell him the news. He tells her to sit tight. The others will come to her rescue. Meanwhile, Louis, Donna, Alex and Harvey meet up to discuss how to get rid of Faye.

Robert tracks down Harvey on the street the next day and demands he help Samantha out. Harvey tells him he is determined to get her back.

Katerina arrives in her office to find Brian. She is surprised. He is there for his client. They discuss the case. She plans to file a motion to dismiss it. Brian would expect nothing less. They smile at one another.

Louis thinks they can get to Faye’s ex-husband for dirt. Hopefully they can get him to talk, Harvey shares. Meanwhile, Alex thinks they need to sue Faye because she tried to strip Donna of her vote. Donna doesn’t want to play it that way. Alex gets angry.

Samantha meets with a friend from the FBI. He can help but he needs her to get dirt on one of her old clients.

Louis and Harvey arrive at Faye’s ex’s office. He shares that he made some illegal moves when he was a lawyer. Faye ratted him out. She then used his loss of a license to gain leverage in the divorce. He’s pretty angry and if they want to help him prove some of her dirty moves he’s ready to take her down. He hands them copies of their divorce settlement.

Later, Louis tells Harvey that maybe Faye’s husband isn’t trustworthy. They get to talking and realize maybe Faye had something else up her sleeve. They get to work.

Alex visits Samantha at the gym. She tells him about the FBI and how she needs to deliver Gavin Andrews to them in order to get Faye out. Maybe Gavin’s niece can help prove he’s dirty.

Louis and Harvey go to Gretchen. She can get dirt on Faye from her old firm but if she gets caught Faye could fire her. Gretchen will take the risk if Harvey throws Louis a baby shower. He agrees.

Katerina arrives at the judge’s chambers. She isn’t feeling well. Her vision blurs as she attempts to state her case. Brian senses something is wrong and backs down, asking for a continuance.

Donna and Harvey argue about thee right way to go after Faye. Meanwhile, Alex refuses to help Gavin with some shady business, steering him towards Samantha who he shares has been fired. Maybe she can help for the right price.

Katerina and Brian talk by phone. She thanks him for helping her out. She was having a migraine.

Faye pays a visit to her ex. She knows he talked to Harvey. He tells her he sent them straight to the Ethics Board. She is a hypocrite who took him down and now its her turn.

Samantha and Alex get Gavin right where they want him. Katerina wins a small victory in court against Brian.

Faye tries to explain to Harvey that she crossed a line years back for the sake of her daughter. She didn’t want her to think her dad a criminal. Harvey doesn’t care. If she doesn’t hire Samantha back she can expect to be disbarred.

Susan pushes Katerina in an uncomfortable direction with the case against Brian. Harvey tells Louis about Faye’s explanation. Louis doesn’t want to take down her family. He wants to wait and see what Alex and Samantha come up with before doing that.

Robert catches up with Alex on the street. He knows they plan on turning in Gavin for Faye. He warns Alex it is a bad idea, especially since Samantha has a bad past with the FBI. Alex tells him it is too late. Robert rushes to Sam’s side during her meeting with the FBI. Robert makes them give Sam immunity. They do and then share they have nothing to offer on Faye after she turned Gavin over to them. Sam is angry. Robert tells her she cannot do anything stupid.

Brian admits to Katerina that he has been delaying the case to spend time with her. She gets angry. They need to move on.

Donna tells Harvey they cannot take down Faye’s family. He agrees. Katerina makes Susan her associate. Faye thanks Donna for convincing the others not to take her out. Across town Harvey and Sam meet up. She gets why they didn’t take down Faye, its all about family. Harvey offers to go with Sam to Pittsburgh when she shares what she had discovered. That is where her biological father is.