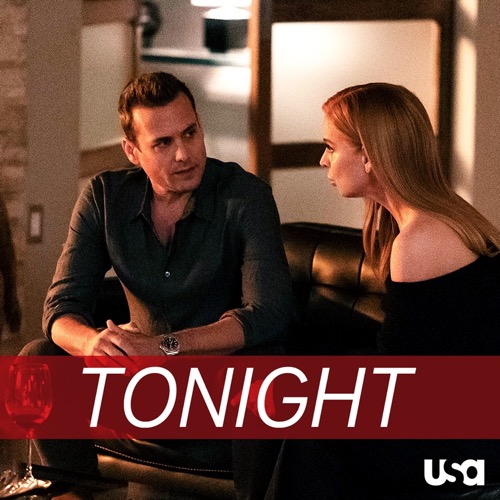 Tonight on the USA Network their critically acclaimed drama, Suits returns with an all-new Wednesday, September 11, 2019, episode and we have your Suits recap below. On tonight’s Suits season, 9 episode 8, “Prisoner’s Dilemma”, as per the USA Network synopsis, “An old foe forces Harvey to account for past actions. Esther has a problem only Louis can solve.”

Harvey meets with Sean and tells him he needs to represent with them now that they have been accused of occlusion. Meanwhile, Esther shows up to see Louis. He tells her the merger is solid as a rock. She has something to tell him. She shares that Paul assaulted her 15 years prior at a conference and she cannot have him on her board. Louis wants her to tell the board. She can’t. Not after all this time. She needs him to make this deal go away.

Harvey arrives home, pretending to be late for wine. Donna doesn’t buy it. He confesses Malik is coming after him. She’s nervous. Harvey tells her he was but now he has Sean on his side.

The next day, Harvey represents Sean in court. Meanwhile, Louis brings Katerina the paperwork for Esther’s merger. He tells her they need to stop it all. Back at the office, Faye tells Harvey he needs to get off of Sean’s case. Malik has an affidavit signed by someone who swears Harvey and Sean colluded.

Louis goes to confront Paul and explodes. Harvey also confronts the man who signed the affidavit. The man admits he had to because he was threatened. Jail time for him and his wife scared him. He shares that Malik learned about all of this through a man named Sutter who died months ago.

Esther comes to see Louis angry. He triggered her clause. She tells him to stay away from her and get family.

After paying a prisoner involved in the Malik case a visit, Harvey calls Sean and tells him he needs to call Malik and his dogs off.

Sean visits an associate who tells him Malik didn’t do this to him, Harvey did. Meanwhile, Donna goes to Malik to warn him to back off of Harvey.

Louis calls Samantha for help. He asks her to take down Esther’s old mentor down. Louis then goes to Esther to apologize.

Harvey is picked up and arrested for colluding with a federal prosecutor. Malik questions him and Sean in a separate room. Meanwhile, Donna can’t find Harvey and begins to worry.

Malik works both of them, scaring Sean by telling him it’s all Harvey while telling Harvey he is a manipulator. Alex arrives shortly after to defend Harvey.

Faye goes to Sean and helps protect him while disbarring Harvey.

Harvey gets out of jail and punches Sean. He doesn’t regret helping Mike. Donna goes after Faye. How dare she help Sean to disbar Harvey?

Samantha and Katerina team up to take down Esther’s ex-partner. Meanwhile, Harvey gets Malik on fabrication. The FBI comes in and takes him away.

Harvey comes home thrilled but Donna has bad news, his mother died of a heart attack.