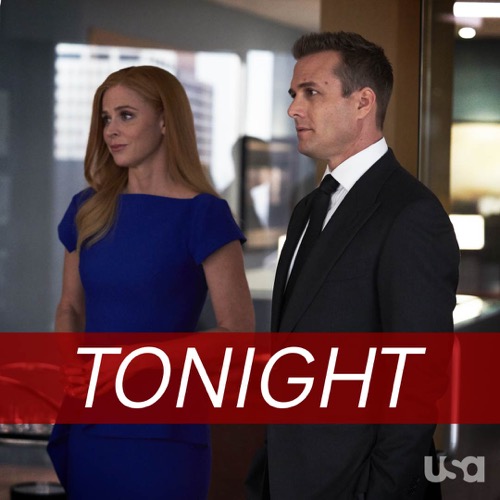 Tonight on the USA Network their critically acclaimed drama, Suits returns with an all-new Wednesday, September 25, 2019, episode and we have your Suits recap below. On tonight’s Suits season 9 episode 10, series finale, “One Last Con”,   as per the USA Network synopsis, “Facing its potential destruction, the partners must go all in to save the firm.”

Faye calls Harvey to tell him that Katerina came to her. She was the one behind the lawsuit. Harvey goes home angry and tells Donna about it and how he needs to call Mike to the stand tomorrow.

In court the next day, Harvey calls Mike to the stand. Mike tries to avoid it but the judge forces him. Harvey rips Mike apart on the stand.

Alex apologizes to Katerina for her involvement while Louis is confronted by Robert who tells him to fix this thing. Louis tells him he just needs to trust him. Faye tells Harvey he is taking the stand tomorrow. He doesn’t want to but Faye insists. He needs to tell the truth.

At home, Mike comes face to face with Harvey who is there to tell him the truth. He shares about Faye’s deal. He tells Mike how he is being forced to take the stand. Harvey’s only plan is to lie and say he doesn’t remember. Faye will call him on it and he could lose his license. Mike has a plan, one last con.

Mike heads to meet Samantha and Robert. He has a plan, he tells them after sharing Harvey is taking the stand and Faye is after Sam’s license.

Harvey, Louis and Donna all meet secretly. They are all in together to get rid of Faye. Louis goes to see Gretchen. He needs her help and that could be perjury. She’s in.

Harvey and Donna talk alone. He is nervous. She tells him she knows they can do it but they have till tomorrow to decide. Meanwhile, Katerina visits Faye and tells her if Harvey testifies then she will too. Faye finds Harvey and tells him he better get Katerina off the witness list. He will if she signs off to leaving the firm.

The next day, Harvey and the gang trick Faye into signing her walking papers and if she doesn’t go they will provide proof of her illegal firings and witness tampering.

Harvey asks to speak with Faye alone. Minutes later he comes out and tells the gang she is gone. Louis wants to know what he did but Harvey won’t share. They head out for drinks. Louis needs a bit. He heads to see Stan and asks him to officiate his wedding. Stan tells him if he does they cannot keep their therapeutic relationship going. Louis thinks it is great since he doesn’t need therapy anymore. He actually calmed Harvey down earlier.

At Louis and Sheila’s wedding, Harvey and Donna walk the aisle as part of the wedding party. Sheila’s water breaks. Sheila freaks out. They leave. Harvey, Donna, Mike, and the others all sit around. They have nothing to celebrate. Harvey thinks they can. He proposes to Donna and asks her to marry him tonight, now. He already has a ring ready. They make the announcement. Everyone is thrilled.

Meanwhile, Lois is terrified as Sheila is wheeled in. Harvey gives his vows at their last-minute wedding. Louis gets word that her wife and daughter are fine. He cries and hugs the doctor.

Harvey kisses his bride. They dance after Robert announces Louis and Sheila welcomed a healthy daughter.

Louis holds his daughter, Lucy. Donna and Harvey arrive. They tell him they plan to leave the firm and move close to Mike and Rachel. Louis gets upset but accepts it.

Back at the office, Samantha sits at her desk happy. Louis arrives and tells her he needs her to be his Harvey. She can be his Samantha. Harvey and Donna walk through the office, remembering all the times they had there. Mike arrives to see Harvey.

Katerina arrives to meet Louis, Sam, and Alex. They tell her she is a name partner now. She is thrilled. Meanwhile, Harvey stays behind to enjoy his office one last time, remembering all he has been through with the team. Donna and Louis ride the elevator one last time hand in hand.