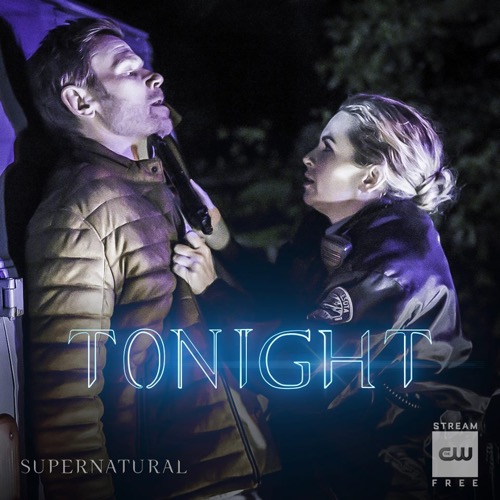 Supernatural airs tonight on the CW with an all new Thursday, January 24, season 14 episode 11 called “Damaged Goods,” and we have your Supernatural recap below. On tonight’s Supernatural episode as per the CW synopsis, “Dean spends some bonding time with Mary and Donna. Nick finally finds the answer he has been searching for. Sam is left to make an unimaginable choice.”

Nick has taken a demon hostage in the hopes of getting more information on the death of his family. After he gets little information he kills her. Meanwhile, Sam is going through his books. He is determined to find a way to help Dean who tells him he is headed out on a solo drive to see their mom at Donna’s cabin. Sam offers to go but Dean tells him he needs alone time. He hugs Sam goodbye. Sam calls his mother and tells her that Dean is acting strangely.

Dean and Donna are together eating burgers at a restaurant. They make small talk until Donna breaks the ice, telling him she knows he was possessed before. She is all right and he doesn’t need to feel bad. They talk some more before he hugs her goodbye.

Dean arrives at the cabin. He hears shots. His mother is shooting pumpkins out back for practice. She tells him Bobby is away for a few days. She asks if Sam should come to stay too for a full reunion. Dean tells her no, he could use some mom time. She senses his moodiness. He tells her he is just hungry. He wants her to make him the Winchester Surprise. She agrees and takes off to the store.

Dean heads into the garage. He starts building something while his mom is gone. He welds at the bench while playing music. Meanwhile, Mary is approached by a young teen at the store who offers her help loading her groceries into the truck. Later, the teen is working in the parking lot when he is approached by Nick who asks where Mary went. The teen pretends not to know, playing dumb. Nick drives off. The teen makes a call.

Night has fallen. Nick is pulled over by the police. The officer arrives at the side of his vehicle. It is Donna. Donna asks him to step out of the van. She read the plates and it is stolen. She cuffs him. Someone he gets free and attacks her.

Mary arrives home. She calls Sam and tells him Dean is eating funny. She cooks and they share a meal and some memories of the past. Dean talks about a fun time with dinner, Sam and their dad. He tells her he loves her and is so happy she is here now. She offers to listen to his problems. She knows something is wrong. He tells her he doesn’t want to talk.

Later when Dean is sleeping Mary sneaks out to the garage. She sees what he is building and his notes. She shakes her head in disbelief. She comes out of the garage and face to face with Nick. Meanwhile, Donna wakes Dean by phone. She warns him that Nick is coming after Mary. Dean runs outside with his gun raised and comes face to face with Sam.

Nick has Mary in the Evan. He wants to know about Tonya and how Mary managed to chase two demons away from her. Mary tells him Abraxas is dead. She put him in the puzzle box. He puts a knife to her throat. She offers to take him to him.

Donna meets with Sam and Dean. She radios into work to get anything on the van Mary and Nick is in. Meanwhile, Mary and Nick arrive at a storage facility. They head inside. She nods to a set of lockers. He Strats breaking them open to find heads and more in each one until he finds the box. They need a host, she tells them.

Dean and Sam rush to find Mary. Nick grabs the security guard at the facility and straps him to a chair. The puzzle box starts to spin. Nick finishes opening it with a drill. The spirit comes out and makes its way into the guard who is now possessed. Nick questions him about Pike Creek. He asks him why he killed his family. The demon will answer that after Mary is dead. Nick grabs Mary. Shots are fired. It is Dean and Sam. Nick releases the demon from the circle. He tells Nick that Lucifer was behind the killing of his family. Just as the demon heads to leave, Nick kills him. Then he goes for Mary. Donna shoots him in the leg.

Mary tells Dean she saw what he was building and the three of them are going to talk. Later, Dean shows Sam the container/coffin he made. He made it for himself so they can throw him into the Pacific where he and Michael can never get out. He can feel Michael in his head and he plans on getting out. Dean has to stop it. Billie told him. She told him that this is the only way that this ends right. Sam is angry that Dean was going to do this and not tell him. Dean tells him no matter what he is doing this alone or with help.