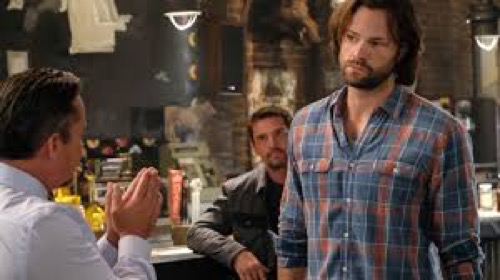 Supernatural airs tonight on the CW with an all new Thursday, March 7, season 14 episode 14 called “Ouroboros,” and we have your Supernatural recap below. On tonight’s Supernatural episode as per the CW synopsis, “Sam (Jared Padalecki) and Dean (Jensen Ackles) enlist the help of Rowena (guest star Ruth Connell) to track down a demi god who feasts on human flesh.

The challenge of keeping Michael at bay is proving to be more difficult than originally anticipated.”

The boys were hunting a maneater. The guy they were chasing breaks into homes and subdue the homeowner without restraint or even a fight. The victims tend to just follow orders and let the creature eat them which basically told the boys nothing. They didn’t know what they were looking for and somehow this creature could see them coming. He would just pack up his stuff and leaves right before the boys came onto the scene. Like he knew the future! The boys hadn’t known what to do about it and so they turned to Rowena. She could said she could help find this creature and yet the boys didn’t get much farther in their search with her assistance. Rowena was also asking a lot questions about Jack and how he was able to recover from the last time she saw him. And so boys weren’t exactly being honest when they asked for her help.

Rowena knew some magic must have been involved to get Jack back up on his feet. She could see it in the way the boys treated Jack like he was still fragile and so she tried to get answers out of Sam when they were alone researching creatures, but he managed to not say anything and so Rowena was left to figure it on her own. She did some undercover spellwork on Jack and when she wasn’t doing that she was pretty useful with the research. Rowena and Sam found out their creature was a gorgon. He was a snake demi-god like Medusa and he did know the boys were coming beforehand because he could also eat his victims’ eyes in order to see the future. This gorgon had even left a note for boys and Rowena on his last victim.

Sam and Castiel were able to check out the scene by pretending to be FBI. Its how they got close enough to see this note and it made Castiel question why he hadn’t been mentioned. He and Jack were both left out of the note and so that’s how the boys came to the conclusion that the gorgon couldn’t see angels. Jack hadn’t thought he was an angel, but it turns out he was close enough and that meant he could be part of the mission in a much bigger way. The gorgon had taunted them because he wanted them to come and so the boys knew that they were going to delay going through the front door because it gave the angels the means of getting to the gorgon before anyone else. And so all they had to do was wait for the gorgon to make his move.

The creature found another victim and had locked himself up in a room with him. He also left behind clues for the boys to find him, but he hadn’t been expecting Jack or Castiel. The boys did come as a surprise to him like they planned and all they had to do was subdue him. There was just one problem with that. The creature was smarter than he looked. He played mind games with Jack and when Castiel tried to get him to shut up – the gorgon kissed him. The kiss had halted Castiel in his steps and he went down. Jack had then tried to help and got knocked out for his troubles. The boys soon rushed onto the scene and Dean had also suffered toxic kiss of the gorgon. And Sam hadn’t been able to fight it on his own.

The gorgon was making his escape when Jack came to and beheaded the thing. Jack and Sam tried to revive the others, but their traditional methods weren’t helping and so Jack expended some of his soul to bring back Castiel. He had wanted to do the same for Dean and had been warned about what it mean for him if he used too much. So that’s how Rowena figured out the secret. She knew that some powerful magic had been used and that she couldn’t access it with what she was doing. Therefore, learning the secret and how she learned it had upset her. Rowena took a walk and so do Castiel and Jack. Jack wanted to know why he couldn’t use his powers to save Dean’s life and Castiel told him that’s how it will always be with angels and humans.The humans will either grow old or die young. There was no middle ground and so Jack thought it was selfish not to use his powers to help them. They weren’t like the angels and Jack didn’t want to have to keep going through love and loss. He was about to go help Dean no matter cost when the boys both heard Dean. Dean was tearing up his room and was flipping everything over. It was like he was back to being stuck with Michael and when the others finally got him to call down enough to talk – Dean said that Michael wasn’t in the pantry anymore. He got out and unfortunately he came to the bunker. He had possessed Rowena and had been killing off everyone that had been sharing the bunker. And that included Maggie.

Rowena had let Michael in because he threatened to kill everyone she cared about if she didn’t and as it happens he was going to kill the boys anyway. Michael tried to kill the others and so that’s when Jack decided to use his powers.

Jack and Michael engaged in a battle of wills, but to the surprise of the Winchesters and Castiel it had been Jack that won.

And so now Jack was back at being fully operational.