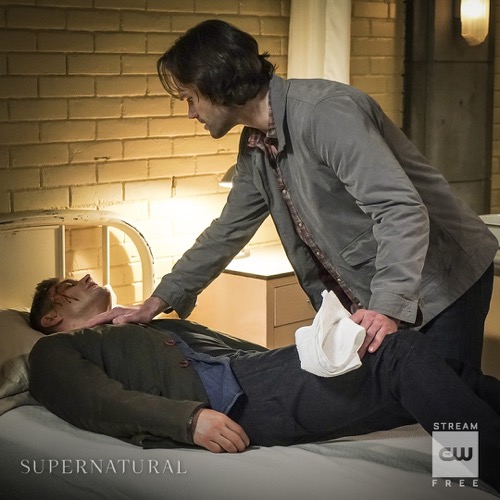 Supernatural airs tonight on the CW with an all new Thursday, March 14, season 14 episode 15 called “Peace of Mind,” and we have your Supernatural recap below. On tonight’s Supernatural episode as per the CW synopsis, “Sam and Castiel follow a case to a picturesque little town in Arkansas, only to find out nothing is as idyllic as it appears to be. Dean and Jack take a road trip to visit an old friend.”

Jack doesn’t know how much of his soul he had to burn off to fight Michael, but he does like his new powers and other than that he said he was fine. He didn’t want Castiel to pry. Castiel was worried about Jack’s soul and was trying to figure out if they could get some kind of estimate. He kept asking Jack all these questions and when he wasn’t he was talking to Dean. Dean had some experience with this and Castiel hoped he would have the answers. Its just been a while since Dean has had anything to do with the soul business and he warned Castiel that he has his own problems with Sam. Sam couldn’t take being at the bunker. He would envision seeing everyone’s murder again and so he constantly wanted to go hunting.

Dean couldn’t keep up with his brother. He was getting tired out and so he came to an agreement with Castiel Castiel wanted Dean to speak to Jack and he would as long as Castiel took this latest case with Castiel. Castiel and Dean responded to an odd occurrence at a video store and unfortunately, someone died, but when the boys went to go ask people in the nearby town if they had seen or heard anything it was like they went back in time. This town seems to have stopped somewhere in the 1950s. The clothes were retro and the people there didn’t even recognize a cell phone. They also didn’t curse and maintained picturesque neighborhoods with perfect lawns. And there was a sheriff there that could at least recall the victim.

The victim, Conrad, had died when his head exploded yet oddly the sheriff thought he died from an aneurysm and he had been quick to dismiss what actually happened. It had been the same for the whole town. They had all been a little too fast in ignoring an obvious problem. It turns out Conrad had rented a room at the local boarding house and the boys went there to first pick up on some clues. It wasn’t until Sam started to speak differently and suggested that they stay for pot roast that Castiel realized that there might be something wrong with him. It was like someone flipped a switch with him. Sam went from being heavily depressed about all his friends dying and wanting to forget to someone that was falling in with the 1950s mindset.

Only their appearance in town woke something up. The two had run into Justin and Cindy Smith on their first day in town and Justin had been the one to ask what’s that Sam was carrying around. So when Sam said that it was a cellphone, it made his Justin remembered that he had seen cellphones before. He had bought one for his teenage daughter and remembering her had helped him to remember himself. His real name wasn’t Justin and Cindy was not his wife. She tried to ask what was wrong with him and he ran away from her screaming. The man known as Justin made it to the street when his head exploded and so whoever or whatever was controlling these people could also turn violent if they refused to play along with the theme of the town.

Castiel woke up the next day unable to find Sam. Sam left the boarding house and he didn’t leave behind a note or anything to explain where he went, but Castiel did hear some gossip down at the dinner that there was an incident with Mr. Smith and so he went over there expecting to find Sam checked out the new scene. Except Sam wasn’t Sam anymore. He was calling himself Justin Smith and he didn’t know Castiel. Castiel started to use the word “hell” and “damn” and suddenly he gets kicked out for using salty language around Mrs. Smith. It hadn’t made any sense to Castiel and so he decided to investigate the case like Sam would have. He went through Conrad’s personal possessions and he found several love letters from the girl that works at the dinner.

Her name is Sunny. She had begged Conrad to leave town while he still could and that meant she knew what was going on with the town. Castiel went down there and threaten to rip the memory out of her if she didn’t talk, but she barely got the words “he’s out of control” when the sheriff came in. It was the sheriff that was controlling everyone. He was also Sunny’s father and that’s why she knew what he was doing. She could do it too and the difference between them was that she never tried to force anyone to change. Sunny didn’t like what her father was doing and she had stuck around more because she made a promise to her late father. And so it broke her heart when her father slowly became a monster.

He hated what modern times was bringing because he thought it was the reason behind the drugs and the alcoholism, but people were depressed because the mill closed down and all viable work was slowly leaving town. They may have needed hope but they didn’t need manipulation or to be killed if they ever tried to think for themselves. So Sunny finally worked up to put an end to her father. She used the gift of manipulation that she had gotten from him to make him be happy – she trapped in his mind where he lives in a perfect world and he doesn’t have to force people to play along. And while neither Castiel nor Sam ever found out what Sunny or her father were, they did leave Arkansas in a better mood.

It didn’t mean much when Sam had to return to the bunker and so he finally told Dean how much he hates it there. He knows that it’s their home and that all he needs is time, but he didn’t want Dean to pressure him.

Dean had seemed understanding and maybe it was spending time with Jack that made him see how much his brother was in pain.

But the only one that knew something was off was Castiel because he walked in on Jack killing his snake with his powers.