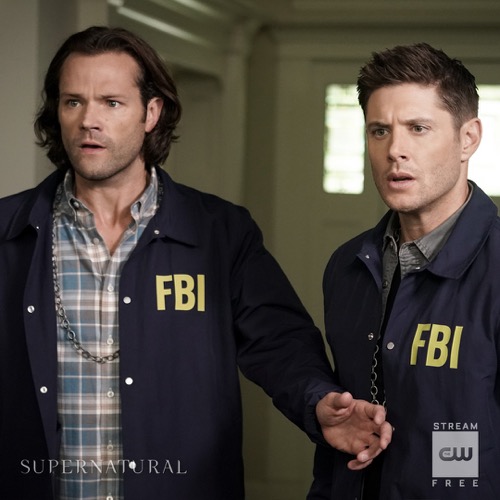 Supernatural airs tonight on the CW with an all-new Thursday, October 17, 2019, season 15 episode 2 called “Raising Hell,” and we have your Supernatural recap below. On tonight’s Supernatural episode as per the CW synopsis, “Sam, Dean and Castiel call on Rowena to help keep the evil souls at bay and get an unexpected assist from Ketch.”

Harlan, Texas – A woman walks through the dark windy suburbs. She drops her keys and sees a man when she stands back up. She knows him. They talk a bit before he stabs her repeatedly. She falls to the ground. He morphs into an older man.

Sam, Dean, and Cas are at a local high school posing as an FBI. Sam addresses the large group, telling them to stay out of the quarantine zone. They all have questions. Meanwhile, Dean and the demon using Jack’s body, Belphegor, walk around outside, guarding the area. Several figures come at them. Dean shoots them, learning one of Jack the Ripper. Several locals plot a way to get out of high school.

Across the way, a group of ghosts has their own meeting about how they were spat out of hell. One was just shot with rock salt by Dean and he isn’t happening. They need to find a way out.

The local humans that were plotting to get out of the high school make their way through a nearby neighborhood when they come face to face with two evil ghosts. Rowena arrives at the high school, she is ready to help. They want her to create a ghost vacuum of better sorts. They are interrupted and head outside to find the locals who were walking the neighbors are now possessed and in the company of the ghost who was running the meeting. Before anything can get bad, Ketch shows up, blowing the evil souls away with a gun. Sam, Dean, and Cas are all surprised and a little irritated.

They get Ketch up to speed on Jack’s death, who Belphegor is while Ketch and Rowena flirt making everyone feel awkward. Ketch shares that he was asked by a demon to kill Belphegor.

Dean and Rowena go over her lengthy list for her spell. He warns her they have a crisis and to stay clear of Ketch.

Cas tries to talk to Dean about how he didn’t tell him about Jack. He is sorry. Dean doesn’t want to hear it or anything for that matter. None of this is real he tells Cas. Cas sees it all otherwise. They tried their best.

Ketch and Dean walk the perimeter together in the dark talking about how God is now the enemy. Ketch also wants to know about the witch! Dean gets a notification that two hunters haven’t checked. They head to see what is going on when they are attacked by two ghosts. A voice tells the ghost with an ax to get out – it’s Kevin!

Kevin shares that God cast him down to hell. Meanwhile, Chuck is in Reno harassing Amara. She realizes he is there because he needs her. After some analyzing she notices he is not complete to at full strength.

Sam and Dean talk alone about Kevin. They aren’t sure it’s safe to have him around. Belphegor sneaks upon them. He tells them Kevin isn’t getting back into heaven. Sam’s shoulder suddenly hurts at the same time Chuck looks at his own wounded shoulder in the mirror of a Reno hotel room.

Kevin arrives to see all of the evil ghosts in the middle of another meeting. He wants to know what they are going to do to the hunters. One of them doesn’t trust him, he heard about Kevin’s relationship with Sam and Dean.

Ketch is showing off for Rowena who is working on her potion. His use of electricity turns her on. Dean calls interrupting their near kiss.

Rowena is on her way down the street when she is intercepted by one of the evil ghosts. He wants to send a message to Sam and Dean – they have the boy. Ketch pops up to take out the ghost but only for a second as he is knocked out. Rowena continues to run without looking back.

Rowena runs to tell Sam and Dean, she gives them the soul catcher. But she WASN’T sure if it will work. They head to the house where all of the ghosts are. They manage to take out several ghosts but that is all. The warding is getting weaker. They head outside where they see dozens more make their way into the area. Dean shoots at several but it is useless. Rowena pulls out the ghost catcher but is attacked by Ketch who is obviously possessed now. He takes the trap. Dean shoots at him. Ketch drops the trap but Dean grabs it and hands it to Rowena who takes the bunch out.

Ketch is taken away in a stretcher after Dean was forced to shoot him. Later, Sam and Dean talk with Kevin. He wants to go back to hell now. They want to get him into heaven. They want to make it right. He understands they can’t. They say there goodbyes. Belphegor weakens the warding to let Kevin leave.

Amara is dressed up and all ready to go. Chuck wants to go with her. They need to stay together. She laughs at him. She wants to be as far away from him as possible and she also knows there isn’t much he can do injured. He is on his own now, trapped.

The gang watches as more and more evil souls make their way onto Earth. They need to find another way to get rid of them.