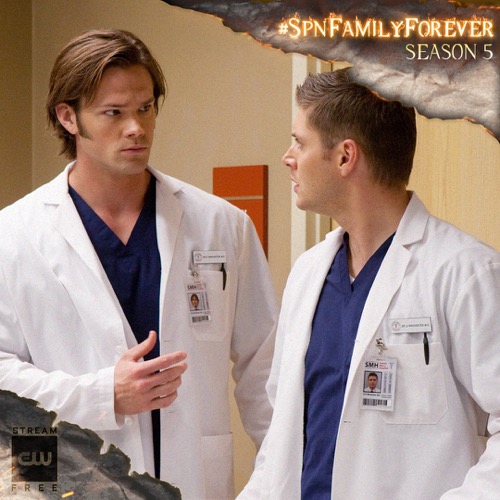 Supernatural airs tonight on the CW with an all-new Thursday, October 24, 2019, season 15 episode 3 called “The Rupture,” and we have your Supernatural recap below. On tonight’s Supernatural episode as per the CW synopsis, “Sam, Dean, and Rowena work tirelessly to keep all of hell from breaking loose. Castiel cannot forgive an arrogant betrayal.”

Sam, Dean, Cas, Rowena, and Belphegor locate a safe space inside a crypt so that Rowena can try and work her magic. As she speaks her enchantment, evil spirits pound on the doors. She continues on while her hands shake. She falls to the ground with tears. The spirits are too strong and angry. She tells them they are all going to die. It’s too late, she can’t shut the gates of hell. Belphegor taunts her a bit, pointing out that she couldn’t do it. He heads to leave. Rowena lay on the floor upset. Sam tries to comfort her. She needs a minute. Sam and Dean talk alone. Dean is angry. He is sick of this.

Outside, Belphegor and Cass stand over the opening to where the spirits are making their way in. Belphegor calls it a tear, not a door. He has an idea. He heads to the guys and Rowena to tell them about Lilith’s crook she used to control her flock who was topside. If they can get to it. Rowena thinks she can also help with a healing spell now that Belphegor has called the opening a tear. She’ll need some materials and a helper. She chooses Sam. Belphegor also needs some muscle with him to go to hell. Dean signs him up for the job.

Ketch wakes in a hospital bed. A nurse comes in and tells them they got all the bullets out. Ketch gets up. He needs to go. The nurse tells him he is still being observed. The doctor comes in and throws the nurse aside. It’s Ardat. She wants to know why Ketch didn’t locate Belphegor. She wants to know where he is. She chokes Ketch. He refuses to give up Sam and Dean or Belphegor. She rips his heart from his chest.

Belphegor teases Cas about his friends electing him to help. Annoyed, Cas pushes Belphegor into the tear connected to hell. Cas jumps in after him.

Sam, Dean, and Rowena meet with a female fellow hunter. She is willing to stay back and guard the town. Ketch texts Dean – he is ready to get back in the game.

Belphegor and Cas walk through hell. No-one is around. Cas asks why Belphegor really needed him before calling him an abomination – he is wearing Jack like a coat. They head through a set of doors. Belphegor recognizes a man. They make small talk. When Cas learns he knows nothing of the crook, he kills him. They find a chest. There is an incantation on it. Cas reads it. Meanwhile, Dean watches as spirits fly through the tear. Sam practices the spell. Cas gets the chest open. He finds the crook. Before he a Belphegor can leave, Cas is thrown to the side by Ardat.

Ardat attacks Belphegor until Cas comes to and fights back. Belphegor manages to get a weapon while Ardat tells Cas that Belphegor’s goal is to rule hell. He tells Cas that isn’t entirely true. He plans on summoning all the evil souls and sucking them in. He will be a god. Cas can’t stop him. He begins calling them all as Sam and Rowena work the chant. Cas finally gets close enough and stops Belphegor who is on the ground. He pretends to be Jack but Cas isn’t buying it. Taking Belphegor’s soul from the body.

Dean sits outside watching the tear fill in with earth. Cas lay by the skeleton of Jack while Rowena tells Sam she plans to suck up all the souls and to do so she needs Sam to kill her. He is upset – he can’t do that. He is torn. Rowena begs him. He can’t let the world die, his brother dies. He leans in to hug her, stabbing her. When he pulls back she tells him “that’s my boy.” They both cry.

Outside, Cas tells Dean that he killed Belphegor. Now he doesn’t know what they will do. Dean is upset. Rowena and Sam suddenly appear. Rowena is bleeding with a hole in her abdomen. She walks, sucking in the souls. They all watch in disbelief as she tells them goodbye before throwing herself into the tear that is hell.

Back at home in the bunker, Dean checks on Sam who is alone in his room. Dean tells him they found Ketch dead. Dean tries to be upbeat – they did it. They beat one last apocalypse. He did what he had to and Rowena knew the choice.

Cas comes to see Dean who is having a drink alone. Cas is sorry about Rowena. Dean is mad – he shouldn’t have changed the plan then Rowena wouldn’t have had to die. Cas doesn’t get it. Dean still blames him for Mary and there isn’t much more he can do. He heads to leave. Dean asks him where he is going. Cas tells him Jack is dead, Chuck’s gone, he and Sam have one another. He needs to move on.