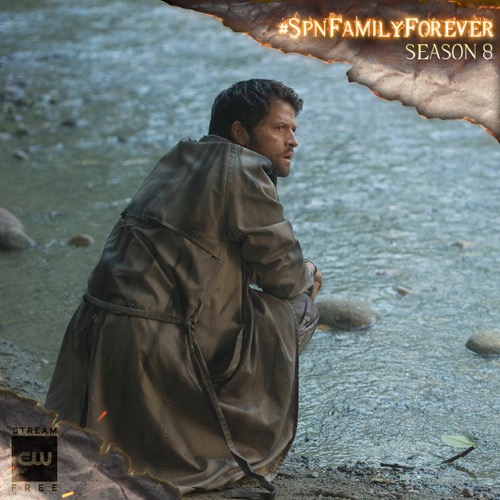 Supernatural airs tonight on the CW with an all-new Thursday, November 21, 2019, season 15 episode 6 called “Golden Time,” and we have your Supernatural recap below. On tonight’s Supernatural episode as per the CW synopsis, “Sam and Dean are visited by an old friend. Castiel investigates the disappearance of a local teen.”

Rowena’s supposed neighbor who lives next door to her knocks on her door. She hasn’t seen her in a while and is wondering if everything is all right? When Rowena doesn’t respond, the woman lets her self in with a little magic and rips the place apart looking for something. She doesn’t make it out alive, she begins coughing up blood before she hits the floor.

Back at the bunker, Sam has been looking for signs of God and Lilith while Dean works his way through boxes of cereal watching a Scooby-Doo marathon. Dean is sure God will find them.

Cas is at a local tackle and beach shop where he learns from the owner a young guy was pulled from a local pond and completely drained of blood.

On a run, Sam sees Eileen. He brings her back to the bunker. She explains that she’s been trying to get them to see her for a while but it’s hard being a ghost. Dean breaks the news to her that souls from hell can’t get into heaven, Kevin told them so.

Dean and Sam talk. Dean thinks that Sam should use some of Rowena‘s spells and crystals to help Eileen.

Cas heads to the local police station where he runs into a woman looking for her son. He tells her he will help her.

Sam and Eileen arrive at Rowena‘s to find the body of the woman. Meanwhile, a bunch of witches are playing an evil game.

Before leaving the police station, Cas tells an officer that he is an agent and would like to look at the body of the boy who was pulled from the pond. When the officer gives him a hard time, Cas tells him to call his agent, a.k.a. Dean. Cas ends up talking with Dean. Dean breaks the news that God is back.

At Rowena‘s, Sam gets emotional when he finds journals of her spell work. Eileen recognizes that Sam misses her. He confesses that he killed her, it was her idea to sacrifice herself to save the world. He finds something. It was a spell Rowena was working on for their mother. Ultimately, they didn’t need it because their mom was happy in heaven but maybe Sam can finish the spell and help bring Eileen back.

After loading all the spellbooks in the back of the car, Sam begins to shake and cough up blood before dropping to the ground. Eileen tries to help him but she doesn’t know what is happening. He makes his way to the wheel well and finds a hex bag before they are approached by two witches.

The witches take Rowena’s spell from Sam that he planned to use for Eileen. The woman Sam found in the apartment id one of their own and now they’re going to bring her back with the spell that you can only use once. The witch thinks it’s awful that Sam didn’t die in Rowena‘s apartment, it must mean that she left everything to him.

The other witch brings Sam back into the apartment. While they’re in there Sam warms up to her, she explains the other witch makes her life a living hell. Meanwhile, Cas and the mother walk around the lake. He finally tells her that monsters are real. Seconds later they find her son Caleb. He’s crying.

Sam tries to make a deal with the witch, he’ll give her all of Rowena’s books and journals so that she can escape if the witch gets him the spell.

Caleb tells his mother and Cas about the monster that went after him. Just then, the officer from the station shows up. He is an actual monster, shooting at Cas who takes him out with the sword.

Dean has arrived to help Sam out who is now being overrun by the witches. Unfortunately, they have brought their friend back from the dead but she isn’t a match for Eileen who shows up. Dean shoots one of the witches while Sam uses one of Rowena‘s best tricks to kill the other. Eileen takes care of the third witch.

Cas heals Caleb’s injuries. His mother and he ask if he was sent by God. Cas tells them he can’t explain. But he is glad he met them. He needs to get back in the game.

Sam and Eileen are in the midst of performing the spell. It works. Eileen is back. She reaches out to Sam. He touches her hand. She thanks him. They hug.

Sam and Dean share a beer. Dean tells him he did well today. Sam tells Dean they can’t give up. There are things they can do. Dean doesn’t know what is God and what isn’t and that is driving him crazy. Sam explains that they will figure it out. But he needs his brother.