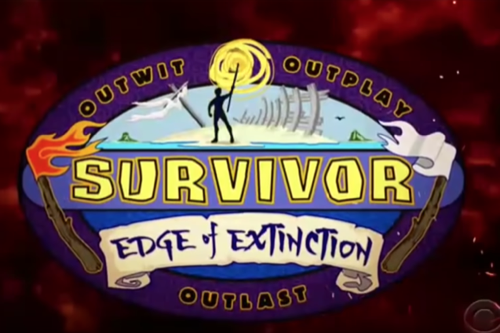 Tonight on CBS Survivor: Edge of Extinction airs with an all-new Wednesday, February 20, 2019, Season 38 Episode 1 premiere and we have your Survivor recap below. On tonight’s Survivor season, 38 episode 1 called “It Smells Like Success,” as per the CBS synopsis, “Castaways hover on the “Edge of Extinction” in an all-new twist, and four returning players attempt to bond with their new tribemates. Also, castaways tackle a giant puzzle in their first immunity challenge of the season, on the season premiere of SURVIVOR.”

Tonight’s premiere episode of Survivor starts with us meeting the castaways. Wardog is in law school and he is not telling anybody, he doesn’t want it to affect his game. Wendy is an ultra fan, she says Survivor is like her life, she never knows what is going to happen. These and other new Survivors are playing against four returning players, David, Aubrey, Wentworth and Joe. These returning players can be either an easy ally or a first vote off. Joe’s strategy is to never shine brighter than anyone else. There is a secret, game-changing twist; after being voted out they have a decision, go home, or go to the edge of extinction where they will be pushed further than ever before to go back in the game, only one will win to stay in the game and compete for the prize of a million dollars.

Welcome to the 38th season of Survivor. In less than 72 hours, the first person will be voted out. That is how fast this game moves. Jeff introduces the four returning to the game. Lauren is excited, she has a huge crush on Joe.

Jeff review the track record of the returning players. Jeff pumps up the players and gets them ready for what promises to be an exciting season. Jeff gives the survivors a few minutes to jump in the water and grab supplies, then get into their boats.

Rick is a huge fan of the show, he is a morning news anchor, he has a lot of belief in himself and thinks he will go far.

Kelley doesn’t trust anyone, she is looking to find genuine relationships and is trying to get to know people on a human level.

David was afraid the first time he played Survivor, this time people are coming to him and asking what to do, so he is trying to give them answers, trying to help them navigate in the early part of the game.

Wendy has Terretts with a touch of OCD, she has to try not to get too excited or it will act up a lot. She is an open book, but she is not going to tell anyone about her condition unless she has to.

Coming into this game, Joe is trying to put Joey Amazing away, but it is hard because new players are asking him what they should do. Joe shows Aurora how to make fire, she is so excited and thinks he is amazing. Julie is trying to help out as much as she can, but she is from New York and doesn’t have many skills, Ron is excited that he found an advantage early in the game, he has to dig three feet near his tree mail. He finds the advantage menu, the gets to choose to steal a reward from the other tribe, or get an extra vote, or get individual immunity. Important though, this advantage has no power after the third Tribal Council. Ron is excited, his goal was to not to be the first to be voted out and it looks like that is now a guarantee.

Gavin is a southern boy and is there for one reason, to win a million dollars. Eric is a firefighter, he has a good rapport with people and immediately connected with Gavin; the first person he wants to get rid of is Aubry. Meanwhile, Reem is happy that everyone is getting along. Lauren thinks Reem is so sweet, like a mom, but in some ways, she is getting on their nerves because she keeps cleaning up. Keith tells Reem that he is a mommas boy, she gives him some advice, toughens up.

Time for the first Immunity Challenge. For today’s challenge they are going to maneuver through an obstacle, one person must then climb to the top of a rope and ring a bell, they will then attempt to cross a three-tiered balance beam, once across, start untying knots to release a bar that will make it much easier for the rest of the tribe to cross the beam. One person must then climb to the top of the crow’s nest to release a lever that drops a slide, once down six players will work together to solve a giant slide puzzle. The first tribe to finish wins immunity. They are also playing for the fire in the form of flint. From the start, we are dead even, both teams are doing great. Manu and Kama tribe are trying very hard to win. Kama has a lead, will they be able to keep it? It looks like it is very close, the challenge is taking a toll on a few bodies. Kama wins immunity, sending Manu to Tribal Council.

At Manu camp, Keith overhears at the well that Kelly and Lauren are the targets because they are seen as the dynamic duo. Keith knows that he just has to play the game for him, no matter who goes home. Wendy wants to vote with Ream, she thinks the tribe should break up Kelly and Lauren. Wardog now wants to get rid of Wendy because she won’t go with him and vote out Ream. Meanwhile, Ream knows her name is being thrown around and starts to talk to other players, she is not going down without a fight.

Time for Tribal Council. Ream tells Jeff that groups have already been formed within the tribe and her name was thrown around to vote out and she is annoyed. Kelly says that everyone’s name was thrown out there, Ream interjects and says that throwing Kelly’s name out there is normal because she is a good player. Wardog tells Ram that she is being too motherly to everyone and her personality is hard to deal with one day let alone thirty-nine days. Wendy, on the other hand, says she really likes Ream and it helps with her missing her mother. Ream apologizes for touching peoples things and says she was just trying to help. Wendy thinks that Ream is going home tonight. Je4ff says they haven’t had a lot of trials where it is centered around one person like it is tonight with her. Ream says she is surprised and doesn’t want to be the first one voted out.

As Ream leaves she says she hopes it pours down rain on these people, ridiculous, so lame.

Ream is walking away when she sees a sign that reads, “you have a decision to make.” She has to choose, go home or take a torch and go on a boat to have a chance to get back in the game. Ream takes the torch. Ream is dropped off on an island, and there is nothing there, it is dark.