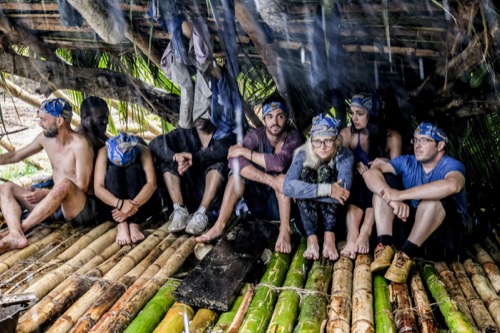 Tonight on CBS Survivor: Edge of Extinction airs with an all-new Wednesday, February 27, 2019, Season 38 Episode 2 and we have your Survivor recap below. On tonight’s Survivor season, 38 episode 1 called “One Of Us Is Going To Win The War,” as per the CBS synopsis, “The first castaway is stranded all alone on “Edge of Extinction.” Also, first-time players bond together in an attempt to get a returnee out of the game.”

Reem is alone on a deserted island, she finds a note: “This Is the edge of extinction,” you will have to work hard for everything. When fear or loneliness sets in you must find the resolve to overcome. If at any point you with to end your adventure, raise the sail and a boat will pick you up.

Reem can’t believe that there is no timeline and she already looks broken. She does not want to disappoint her family and that is where she intends on getting her strength.

Meanwhile, Wendy is angry was voted out and she blames Kelley. Kelley speaks to the tribe and asks them how they feel about going out as a group and looking for an idol, that way Wendy won’t find it.

At Kama, there is good morale as everyone dances around. Aubry is trying to blend in, no matter what. Aubry finds it frustrating that the newbies are not forthcoming about how they feel about the returning players. Aubry is actually appearing desperate because she is going around and saying the same thing to all the players, she is trying to pull someone in with her and it is very obvious.

At Manu, the tribe is out looking for an idol. David is worried about Kelley, he thinks she is a big threat, and is starting to believe that Wendy is right. Rick and David have an alliance, they are two peas in a pod and see the game in the same way.

Gavin is out looking for an idol, its shooting in the dark, but he is determined. Eric is out as well looking, and time away from the tribe is suspicious so they have to be careful. Julie has noticed that the men have vanished for a long time and shares her thoughts with Victoria.

Lauren is out looking for an idol, it has been her dream to find one ever since she was a kid. And, she finds one inside a part of a tree. She is very tight with Kelley but has no plans on telling her that she found it.

Day 6 and its time for the Immunity Challenge. For today’s challenge, both tribes will swim out to a cage, they have to get up and over the cage. They will then have to untie a very heavy and very long snake, get the snake back to shore, place it in a cradle, untie a series of knots that will release number tiles, those tiles will help them solve a combination puzzle. That lock will release eight rings, they will then attempt to land those rings on a series of targets. The first tribe to spell immunity, wins immunity and reward; a choice between spice, knives and a cutting board or a deluxe Survivor fishing gear package.

Kama wins immunity, they choose the fishing gear. Manu loses for the second time and will be heading to Tribal Council where someone will be voted out.

Time for Tribal Council. Jeff asks Wendy if she is concerned she might have votes against her, she says yes. Lauren says they can’t lose again, they need a strong tribe. Jeff asks if that worries him. Keith says that staying in the game is more than winning challenges. From the conversations with Jeff, looks like it is going to be a blindside. Time to vote.

First vote, Kelly, then Keith, Wendy, Keith, Keith, Keith. That is four for Keith, that is enough. No blindside tonight. Keith has a decision to make, does he want to stay in the game, or end his adventure.