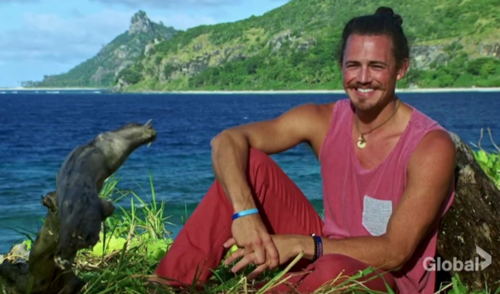 Tonight on CBS Survivor: Edge of Extinction airs with an all-new Wednesday, March 6, 2019, Season 38 Episode 3 and we have your Survivor recap below. On tonight’s Survivor season, 38 episode 3 called “Betrayals Are Going to Get Exposed,” as per the CBS synopsis, “Teamwork is the key to success in an all-new immunity challenge. Also, two castaways attempt to get along while trying to survive.”

Keith arrives at the Edge of Extinctingction, and finds he has company there – he sees Reem and both are delighted to see each other. Although, Reem tells Keith that she hasn’t eaten in days. In the morning, they find two bottles, one with each of their names on it. There is a map it leads them to steps after they climb them, they are both delighted to find rice. But there is only a little bit and every day they have to climb to get rice.

Time for the reward challenge, they are going to race to assemble a wheel barrel, push it through a series of obstacles collecting sandbags. They will then dump the sandbags in a trough, take the wheel barrel apart and use he pieces to build a slingshot. Use the slingshot to fire sand bags at a target. The first tribe to knock down all four targets wins reward. They have a choice, they can choose comfort or chickens. Manu wins the reward, their first challenge of the season, they choose chickens.

Wendy hurt her ankle in the challenge, she forged through but as she was walking to camp it started throbbing and got progressively worse. Wendy starts to worry about the chickens, she doesn’t want them to be killed and is thinking of releasing them. She asks Rick to be an accomplice and he won’t have anything to do with it.

At Kama the mood is somber since their loss. Joe and Aubry seem to be the targets this week if their tribe loses the next challenge and goes to tribal council. Aubry knows she needs an idol, she runs out and starts to search everywhere. Unbelievably, she finds one. Aubry starts to cry, she never thought she would find one.

Wardog is getting upset, he can’t take Wendy complaining about them wanting to kill the chickens.

Kelley wants to target Wendy, she doesn’t want to kill the chickens and she had to be carried into camp because her ankle is so bad.

Time for the Immunity Challenge. Three tribe members will be in a boat, the other four will be tethered to the boat. On Jeff’s go, those four will dive in, begin swimming and pull the boat to a tall tower. Once they reach the tower, the tribe mates in the boat will climb up, leap off and grab a key. Once they have all three keys they will use them to unlock a chest. Inside the chest, puzzle pieces. Use the puzzle pieces to solve a ship’s wheel. The first tribe to spin their wheel, raise their flag, wins immunity. Kama wins immunity, sending Manu to Tribal Council.