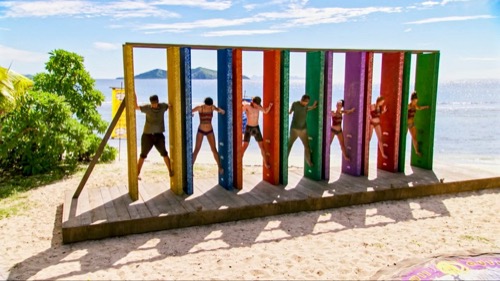 Tonight on CBS Survivor: Edge of Extinction airs with an all-new Wednesday, May 01, 2019, Season 38 Episode 12 and we have your Survivor recap below. On tonight’s Survivor season, 38 episode 12 called “Awkward,” as per the CBS synopsis,“One castaway gets caught red-handed rummaging through someone’s bag at camp. Also, castaways battle to win a reward in the form of love when family members pay a visit.”

Rick believing in Ron is not going very well, Wardog got voted out and that now makes the second time that Rick has lied to him.

Ron has to fix things with Rick, he tells him that the five want to vote him out and he graciously gives him an idol, not knowing that it expired, to prove his loyalty to him.

Time for the Reward Challenge and last time this one was done was nearly a decade ago. It is players and their loved ones. Rick’s wife, Julie’s husband, Lauren’s dad, Ron’s husband, Victoria’s dad, Aurora’s brother, Gavin’s wife.

On Jeff’s go, they are going to race down to the ocean and scoop up water with a bucket, race back, attempt to toss it to their loved one who will then try to catch it and put it in their bucket. The first pair to fill their bucket and raise their flag wins. It’s as close to home as they can get with their loved one if they win, they take them back to camp and enjoy fried chicken and apple pie.

Ron wins the reward, now comes the tough part, Ron gets to pick a player that wins with him, he picks Julie. One more, he picks Gavin. The rest of the survivors say goodbye to their loved ones.

Victoria is thinking twice about her game playing with Ron since he didn’t choose her; she thinks this decision is going to make or break his game.

Back at camp, Ron tells his partner that he has lied, cheated and manipulated people in the game. Furthermore, Ron thinks he is in charge of the game.

Meanwhile, Rick is out looking for an idol. While he is gone, Aurora starts going through his bag and he catches her, she is busted and doesn’t care. Aurora says that she is completely fine with him catching her. Rick tells Ron now that people think he is looking for an idol, that is exactly what he is going to do.

And, Rick does just that; he finds a clue for a hidden immunity idol. Rick is excited, this could be his million dollar immunity idol and is 15 feet above their camp. Rick is going to force himself to be patient, so he can go get the idol when nobody is around.

It’s late at night, Rick climbs the tree and gets his immunity idol, he has his salvation in the game. Rick believes he has two immunity idols, this one and the one Ron gave him.

Time for the Immunity Challenge. Survivors are going to use their arms to brace themselves between two walls while their feet are perched on very narrow foot poles.

Rick is the first one down. Ron is next and Aurora tells Jeff that they have been flat out honest, it is Rick’s time to go. Rick asks Ron who he wants to put up, he says Aurora. Lauren and Gavin are the last two up, they have been there for fifty minutes. Lauren drops, Gavin wins his second individual immunity and is safe from Tribal Council.

Ron is thrilled, Rick is the real target and the only thing he thinks he is going to Tribal Council with is the fake immunity idol that he gave him.

Julie and Ron lie to Rick, tell him that they are voting out Aurora. Victoria, on the other hand, has another plan, she tells Lauren and Aurora that she wants Rick out first, but if he plays an idol, Ron goes next. Aurora tells Lauren and Victoria that she has an extra vote and this is the last time she can use it. But she has to give it to Gavin, because his having immunity, he is the one person who is guaranteed a vote in a re-vote if there is a tie. The only thing is, she is putting a lot of trust in Gavin and she hopes she doesn’t go down in history as a Survivor idiot.

Lauren tells Gavin, that the play is to get out Rick, second is Ron. Gavin has a problem with this because Ron gave him one of the best day of his lives giving the reward to he and his wife the day before so they could spend time together.

Time for Tribal Council. Victoria tells Jeff that if anyone has an idol, it is Rick. Ron says that he did hear his name today, he hopes he is going to be ok. Lauren says that it was very telling who Ron choose to share his reward with. Time to vote. Rick gets up to play his idol, he gives Jeff an advantage menu, he tells him it is expired. Rick tells Julie and Ron that they are villains, he goes to get his real immunity idol that holds full power. Jeff reads the votes. The first vote, Rick, then Rick, Rick, Rick, Aurora, Ron, Ron, Ron. The thirteenth person voted out, Ron.

Ron heads to Edge of Extinction.