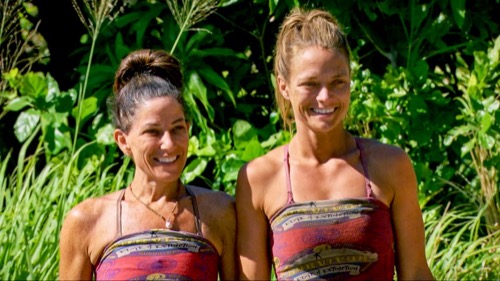 Tonight on CBS Survivor: Edge of Extinction airs with an all-new Wednesday, May 8, 2019, Season 38 Episode 14 and we have your Survivor recap below. On tonight’s Survivor season, 38 episode 13 called “Idol or Bust,” as per the CBS synopsis, “Spirits are lifted when castaways living “on the edge” read letters they wrote to themselves; the final seven castaways battle for immunity during a tough puzzle challenge.”

Vata tribe night 31, now the focus is all on getting rid of Rick. He knows he is on the bottom and probably the only one who will work with him is Julie, so he needs to be really clever.

Aurora felt outcasted, but not she feels like she can work with Victoria, Lauren, and Gavin. She truly does feel connected with her alliance and feels like Rick is a threat and needs to go.

Ron went home and Rick knows if he didn’t give that idol, it would have been him. The early bird gets the worm and Rick is up early already looking around.

Lauren knows Rick is a big liar, he found his idol and wasn’t given it from extinction. Lauren has one goal, make sure Rick doesn’t find another idol.

Rick feels like if he doesn’t find another idol. he is going to be sent home. And, he is not giving up, wouldn’t you know it, he finds himself an idol. This guy is unbelievable, he has been at the bottom so long, but he has been working so hard, he deserves to find that idol.

Time for the Reward Challenge, they are going to race out with a ball, toss it out and into an overhead trap, then catch it on the other side, They will then dig under a beam, to the finish. Once they have both balls, they will attempt to land them on an overhead perch. The winner will be taken by helicopter to the beautiful islands, touch down at a luxury resort to feast and enjoy an open bar.

Survivors are ready and get going, Gavin quickly gets in the lead. Victoria is a close second, but Gavin wins the reward. Jeff tells Gavin that he gets to pick one person to join him, he chooses Victoria. He gets one more choice, he chooses Lauren. Rick and Aurora are shocked, both thought that Aurora would get picked. Gaven, Laura, and Victoria head out for their reward.

Aurora is upset, her alliance was a chance for her not to be on the bottom, but now she feels like she is not good enough for the group.

Gavin secures his alliance with the women on the reward. They decide that if Rick finds an immunity idol, Julie will be the next to go. Secretly, Lauren doesn’t want to get Julie out because she trusts her.

At Vata, the three return from their reward and Victoria tries to prove to Aurora that nothing has changed. Aurora says she is not making any decisions yet.

At Edge of Extinction, there is a special delivery, a box of letters that they wrote to themselves before they started their journey on Survivor. Gavin and Rick are talking, Gavin believes he may have another idol. Rick, on the other hand, is having a blast, running around and hiding, knowing he already found what they are looking for, or suspect what he has. Gavin loves to make them paranoid, it pushes him through the game.

Time for the Immunity Challenge. They are going to race to slide letter tiles into a target, they will then use two handles to transport those tiles into a series of obstacles. They will then use the letter tiles to solve a six-word phrase. The first to finish wins immunity and guaranteed to see day 35. Aurora hates word puzzles and is already doubting herself. Rick is happy that she is doubting herself and hopes many more are too. After a heated and exhausting challenge, Rick wins immunity.

Rick knows they are going to go for Julie and she is the only person that would possibly work with him, so he hopes he can think of a way to keep her in the game.

Aurora thinks Rick winning immunity sucks and he is that thorn in her side that will just not go away. The logical choice is to get rid of Julie now and that is who she is going for.

Rick and Julie plan to get rid of Aurora, they are going to work together.

Julie tells Lauren that she and Rick planning to get rid of Aurora because she is a strong player, Lauren agrees and wants to get Gavin to also agree.

Time for Tribal Council. Julie tells Jeff that she feels like it is just she and Rick against the world. Nobody really wants to talk to her, she feels on the outs. Lauren tells Jeff that she wants Rick out. Victoria says that they are looking at the game as a whole, and Rick should go home, it is better for everyone’s game. Gavin agrees, Rick is the master of disguise and needs to go.

Time to vote. First vote Aurora, Julie, Aurora, Aurora, Aurora. The fourteenth member of the jury is Aurora. It’s another blind side. As Aurora leaves she tells the rest to get Rick out. Aurora makes the decision to go to the Edge of Extinction.