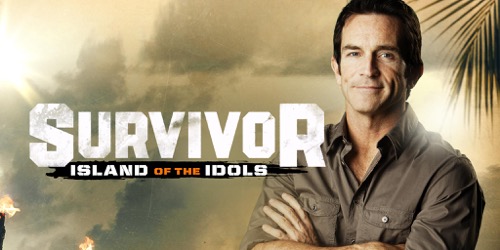 Tonight on CBS Survivor airs with an all-new Wednesday, October 2, 2019, Season 39 Episode 2 and we have your Survivor recap below. On tonight’s Survivor season, 39 episode 2 called “YOLO, Let’s Play!,” as per the CBS synopsis, “One castaway puts their mind to work when given a new opportunity on the Island of the Idols. Also, tribes must climb their way to the top during a tough immunity challenge.”

Lairo, night 3; Vonce is upset that his name was written down. Aaron is upset as well, but it is because he had no idea that Ronnie was going to be voted out. Right now, if the women are smart, they have the majority vote.

Making fire has been something Lairo has been talking about since day one and the tribe is getting frustrated. Chelsea makes fire and Tom is thrilled but says she ruined his male ego for the rest of his life. Chelsea goes looking for firewood and just so happens to find a hidden immunity idol.

At Vokai, day after day it is getting harder to tolerate Noura because all she does is complain. Molly and the others are finding her person wearing on their nerves. Noura says that too many people are chilling and doing nothing. Noura has it in for Molly and thinks she is dangerous. Jason tells Noura to cool it, she needs to take the negative attention off of her. Noura tells Jason that she thinks Molly, is making the decisions. Noura describes her tribe as highschool with her and Jason being the nerds and misfits.

Noura holds a yoga class and Jack finds it exhausting considering the amount of food they have, although he is enjoying it regardless. All of a sudden, a boat arrives at the beach and hands them a note; it reads that Kellee must head on the boat and go to the Island of the Idols and she will return to the camp by the end of the day. She is just numb, kind of in shock and doesn’t know what to expect.

Kellee is on the island and she sees Boston Rob and Sandra come out and couldn’t be happier. Rob reads her the message about mentoring her. They ask Kelle a whole bunch of questions and she has a hard time thinking about anything because they keep talking. Then they give her lots of information about them. Rob tells her after a while that they got to know her a lot, but how well did she listen to the things about them. They have five questions for her about them, if she gets four right, she will get an immunity idol good at either of the next two tribals that she goes. If she loses, she loses her vote at the next tribal council. Kellee is freaking out, she was really listening and she has a terrible memory. Rob says he will sweeten the deal, she has to answer three questions and the idol is good for the next three tribal councils.

Kellee answers the three questions and wins. Rob asks her to pick the next person from the other tribe that is going to visit the idol. Rob is happy, Kelle made a smart decision and he thinks that her tribemates will be in trouble if they underestimate her. Kelle returns to camp and she lies to them, she doesn’t mention anything about Rob and Sandra, and the idol, she starts crying and really putting it on for everyone; she has the idol tied in her hair.

Time for the Immunity Challenge, they are going to swim out and retrieve a ladder from the ocean floor, they will use it to retrieve a bag of balls. They will then race to the finish and land those balls in three targets. The first tribe to finish wins immunity, in addition, they are playing for a reward; cooking kit and spices. Lairo wins immunity, Vokai will have one member that will be the second person voted out of this season. Its Vokai’s first taste of a loss, but it looks like they know who they are going to vote out already, Noura.

At Vokai the mood is somber. Noura knows that she is on the chopping block and she tells Jamal that she will do anything she can stay. Noura then tells Molly that she butts heads with her, but would appreciate if she keeps her. Molly doesn’t want to mess up things, she just wants to get rid of Noura. The other women start talking about getting rid of Molly because she is a smart player and everybody likes her. Jason is also on the chopping block, but he feels the trade winds are blowing and Molly is going to be taken out. Tommy thinks it is too early to let Molly go, Jamal and Jack will be upset. Kellee tells Tommy that she will do whatever he does. It’s a tough decision, do they go with the easy vote, or do they go with a blindside.

At tribal council Noura says that she sticks out, it is just how she is in her life. Molly says that knowing that about Noura, she gets it. Dan says the people playing the game are smarter than the people who are annoying them. Jamal says the petal is not already to the medal, they are in first gear. Lauren thinks that the game is being played in fourth gear, you have to play wholeheartedly. Kellee thinks there are a lot of contradictions. Time to vote. First vote Jason, then Noura, Molly, Jason, Molly, Molly, Molly, Molly. The second person voted out, Molly.