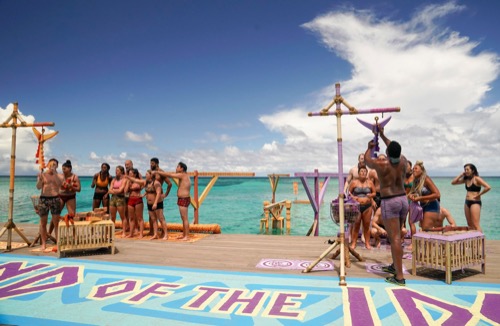 Tonight on CBS Survivor airs with an all-new Wednesday, October 2, 2019, Season 39 Episode 3 and we have your Survivor recap below. On tonight’s Survivor season, 39 episode 3 called “Honesty Would Be Chill,” as per the CBS synopsis, “New tribal dynamics put the castaways on edge; one castaway gets an opportunity to complete a risky task in order to gain an advantage.”

At tribal council, Molly went home and Jason stayed, but Jack and Jamal are going to be angry because this was a total blindside. This was an eye-opener for Jack, a total blindside and he knows he has a lot of work to do. Tommy on the other hand really does want to rebuild the relationships with Jamal and Jack, but Jamal is much harder than Jack, you do him wrong once and he is done. Jamal is not happy, it doesn’t feel good, he thinks he is the wild card now. He will forgive the tribe, but there is no way that he is forgetting.

At Lairo, all the women are in the water swimming and bonding. Karishma is there and feels strange being in her underwear because of Indian people usually cover-up. She feels she has no choice because she needs to show them that she is strong with her alliance. Clearly, the girls are coming together and bonding. Aaron sees it, and he is worried, he wants to squash the dynamic. Vince is thrilled, he is feeling like a bro being included with the guys. But if the women want to work with him, he will do it.

Dan thinks that Jack and Jamal were naïve, and he likes nothing more than naïve people in the game. The biggest win for him and the tribe for the next vote is Noura, hopefully, Jack and Jamal are ok with it. It would be statistically impossible for one person to get on everyone’s nerves, but Noura has managed to do that. Jamal thinks everyone is excited about getting rid of Noura, but he will go rogue and do whatever is good for him. Jamal has other thoughts on his mind, get rid of Dan, he is quick talking and knows the game. Jamal speaks to Janet, she agrees and says she is going to speak to Tommy and get him on board. Tommy loves Jamal, but he doesn’t know if he wants to do this power move with Jamal; maybe Jamal, being a strong player, is the best person to vote out for Tommy’s game.

Karishma cuts her hand and nobody comes to her aid. She honestly felt like nobody cares about her and as far as she is concerned, they are dead to her.

At Lairo, a boat arrives, he has a note; Vince must get on the boat and go to the Island of Idols, he will return to camp the next morning. Elizabeth had a chance to win an idol when she was there, so odds are, he comes back with an idol and they need to flush it. Dean mentions to everyone when Vince leaves that they will split the vote and flush the idol. Everyone looks around at each other, which means one of them will be split with Dean.

Vince arrives at the Island of Idols and is thrilled to see Sandra and Boston Rob. Rob asks where he is from and he starts to cry, he is overcome with emotion to see the two. Rob explains that everyone who comes to the island gets a lesson, and he is staying calm under pressure. Vince has to head to the other team’s tribe, Vokai tribe, and steal fire by lighting a torch. He has to get so close, it’s a real risk. And, if there is no fire there, he will have to bring proof. If he returns with fire and doesn’t get caught, he will win an immunity idol good for his next two tribal councils. If he gets caught, he will lose his vote at the next tribal council. Vince is going to do it. Vince goes in, and there is no fire; so he collects as much ash as possible in his water canister to prove it. He is so nervous, just before he gets to the boat, he falls. He returns, Rob tells him it is a win, Sandra says he earned it. Vince couldn’t be happier.

Time for the immunity challenge; one person from each tribe is going to swim out to retrieve a key. The rest of the tribe will then dive in and climb up onto a teeter-totter where they must balance as a group while retrieving two bags of puzzle pieces. They will then use the key to unlock the last set of pieces. The first tribe to solve the puzzle wins immunity. In addition, they will win comfort; cushions, blankets, chairs, hammock and a tarp.

Elizabeth is swimming for Lairo and Janet swimming for Vokai. Lairo has an early lead, Elizabeth got the lock open underwater first try. Janet tried twice and then puts on a mask and goes under again. Lairo has a big lead, but Vokai is now right behind them – it is almost dead even. Vokai wins immunity and comfort. Lairo is heading to the tribal council.

At Lairo, getting back after the challenge, there is a lot of talk about Karishma causing them to lose the challenge. Karishma is very nervous, she feels like she is on the outs. Vince tells her they should stick with the girl’s alliance and vote out Tom. The tribe is being run by the women though, and the guys don’t even realize it, so it will be interesting to see what happens.

At tribal council, Karishma admits that there is a target on her back, but they don’t know how strong a player she is. She goes on to say that she is different than the other players, she is older and sometimes doesn’t feel like one of the girls. Tom says that he came into the game not to lose a challenge and they have lost twice, and he just wants to get rid of the problem. Karishma gets up and whispers into the girls’ ears. Tom says he is not buying it. Time to vote.