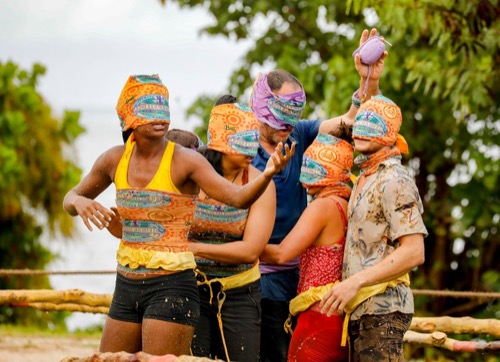 Tonight on CBS Survivor airs with an all-new Wednesday, October 16, 2019, Season 39 episode 4 and we have your Survivor recap below. On tonight’s Survivor season, 39 episode 4 called “Plan Z,” as per the CBS synopsis, “A “showmance” could create distractions and paint a target on two castaways’ backs. Also, after a visit with Boston Rob and Sandra on Island of the Idols, one castaway has a chance to seize an opportunity to prove their power of persuasion.”

Karishma had a gut instinct that she was going to be taken out – she wasn’t, but there were three votes against her and she knows her life in this game is not going to belong. Meanwhile, Aaron doesn’t like that Dean and Chelsea are snuggling at night and look like they might be turning into a power couple. There is no doubt that Dean is into Chelsea, but she is not looking for a showmance or ruining her game. Missy also sees Dean and Chelsea’s closeness and both she and Aaron are prepared to make a big move.

At Vokai, Jamal has this feeling that is implanted in his bones that he is the odd man out. So, when he is alone, he heads out to look for an idol. And, doesn’t he find himself an immunity idol; patience and determination pay off for Jamal and he couldn’t be happier to be back in control of his game. A boat arrives with a message, the tribe must choose one person to go to the Island of Idols. Either they unanimously choose someone or someone volunteers – and it is Noura.

Noura is super excited to see Sandra and Boson Rob – she is so excited to be with two people who she considers to be experts. Rob goes to get a watermelon and they all share it while Rob tells her about the island and her lesson, which is the art of persuasion. Rob says that you just have to know what a person wants and it is easy to persuade them. Rob tells her that they have some insight into their next immunity challenge; the tribe will be blindfolded, one person will be the caller and it will be the most important role. If she convinces her tribe to make her the caller, she blocks one person’s vote at tribal council. Noura doesn’t give it much thought, and Sandra thinks it is going to get her in trouble. Rob also thinks there is no way that the tribe is going to make her the caller, Noura lives in Noura’s world.

Noura is back, she comes up with a lie that if the tribe makes her the caller, they will all get an advantage of knowing the details of the challenge. Dan thinks it is bizarre, all she told them is that they will be blindfolded. Kellee doesn’t think it is a good lie, but now that she lied, there is no way she is going, to tell the truth about the Island of Idols. The tribe is questioning and not believing Noura. The team practice and Noura is a nightmare caller.

Time for the immunity challenge; a caller will lead blindfolded tribe members along a course, collecting three keys along the way. They will then use those keys to unlock a puzzle and blindfolded they will complete the puzzle.

Vokai has one extra person and hilariously, Noura is told to sit out. After all that, she lost her vote at the next tribal council.

Jason has everyone back with three keys, he leads to the puzzle pieces. Kelly has to take all the pieces out of the back. Jason leads Kelly to make that puzzle, they have a huge lead. Lairo is finally back in the game; Elizabeth is staying calm even though they are behind. If Lairo wins this it will be one of the biggest Survivor comebacks. Vokai wins immunity in an epic challenge.

Lairo is going to tribal council and somebody is going to be the fourth person voted out of Survivor. Back at camp, Elizabeth takes responsibility for the loss as the caller but nobody blames her. Karishma knows that she is going to be on the chopping block and doesn’t want to go home.

Dean doesn’t think Karishma contributes much and she should see it coming. Chelsea knows that Karishma doesn’t have an idol, but she tells her to go out swinging, you never know, sometimes people change their minds last minute. Meanwhile, Aaron wants to rally everyone to get rid of Dean, he is poor in challenges and he has Chelsea in his back pocket.

Elizabeth is shocked that Aaron would want Dean out, at least he is helping around camp, Karishma is always taking a nap. Elaine doesn’t understand Aaron’s wanting to get rid of Dean either and calls him a sneaky bastard. Elaine is afraid if Aaron makes a move like this now, what will he do to her later. Meanwhile, Aaron is disheartened that everyone doesn’t seem to be on his side. Missy pitches to Elaine, to flip the target on to Chelsea and it scares Elaine. There is a lot of whispering, hustling, and bustling. It will be interesting to see how it goes.

Elizabeth says that they were going in with a clear plan, but they went back and forth today. Elaine thinks it is unnerving, anyone could be plan Z. Missy says they are playing Russian roulette. Karishma says that she loves what she is hearing, Missy tells her not to love it too much. Jeff asks Missy if she would be shocked if her name was written down, she says no, nobody should be shocked. Chelsea tells Jeff that she wouldn’t want to be blindsided, but she knows it is part of the game. Time to vote.